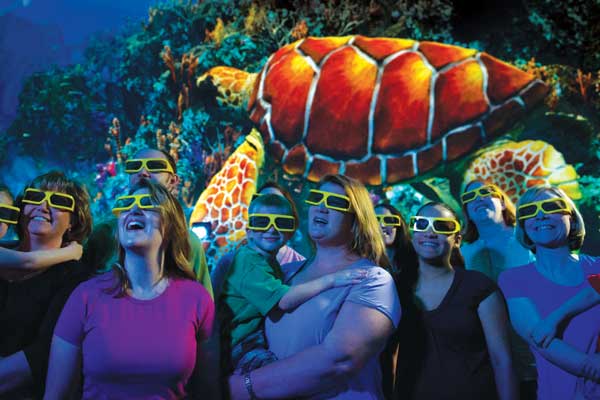 Can’t tear the kids away from a screen? Make it a selling point, says Katie Mcgonagle.

Screen time? Digital detox? Nomophobia? These terms meant nothing just a few years ago, yet the fact they’re now part of the lexicon shows just how quickly technology is moving – and how we sometimes struggle to keep up.

Every parent will be familiar with rows over how much time their little monsters are spending plugged in – playing video games, perfecting their social media profile or watching endless clips on YouTube – so a summer break can seem like the obvious chance to put the gadgets aside and enjoy some wholesome family time. Until you tell the kids they’ll be cut off from their devices, and all hell breaks loose.

The answer? Don’t fight the latest technology – embrace it, with a holiday that lets the whole family get the benefit. That doesn’t mean letting kids spend all their holiday playing computer games in a dark room. But, alongside sports and other activities, there’s no reason why fun technology can’t enhance a family escape.

Here, we look at the latest tech trends that you could use as a selling point, provided you can get the kids – and their parents – to stop staring at their phones long enough to listen.

Theme parks pride themselves on technological innovations – the fastest ride, the biggest drop or the newest wearable tech – so what better place to send families who want entertainment every step of the way?

SeaWorld Orlando is opening Florida’s first virtual reality rollercoaster, Kraken Unleashed, on June 16, featuring specially designed headsets that will immerse riders deep underwater. They’ll be surrounded by creatures of the sea, including mythical sea monster the kraken, adding an extra element of excitement to the ride.

If that sounds too scary for younger visitors, try the gentler TurtleTrek, where the life cycle of the sea turtle plays out in 3D across a 360-degree dome, following the hazardous journey from hatching on the beach to laying eggs of their own. 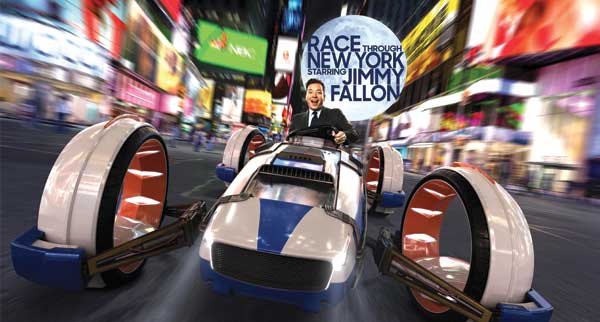 If families can’t decide between Orlando and New York, try Universal Orlando Resort, where the new Race Through New York Starring Jimmy Fallon lets them tick both boxes at once. It opened last month, racing guests through an action-packed Big Apple, finishing at the (virtual) set of Fallon’s The Tonight Show.

Motiongate Dubai is making the most of mod cons too, with 4D rides inspired by Kung Fu Panda and Underworld Awakening, plus parents will also love the nostalgia factor of the interactive Ghostbusters: Battle for New York ride.

Cruise lines are just as keen on being at the cutting edge, which is why having the first Imax theatre at sea was such a coup for Carnival Vista when it launched last year. The screen is a towering three decks high, seats 182 people and shows a mix of recent Hollywood releases and family classics. It’s part of the Carnival Multiplex, alongside the Thrill Theater, where the action leaps off the screen as seats move back and forth and side to side, and viewers might find themselves surrounded by bubbles or getting a quick spray of water – all in the name of entertainment, of course.

On a similarly grand scale, the Two70 venue on Royal Caribbean International’s Anthem of the Seas is guaranteed to amaze even the most tech-weary teens. At night, its two deck-high floor-to-ceiling windows are transformed by Vistarama – with the help of 18 video projectors, creating sharp 12k resolution – into a ‘digital canvas’ for any scene, real or imaginary. And while that keeps kids entranced, mum and dad can make the most of another technological development – the robotic bartender. Mine’s a G&T, C-3PO.

If hanging out with the oldies doesn’t appeal, take full advantage of inclusive kids’ and teen clubs. Norwegian Cruise Line has Wii U games such as The Legend of Zelda, Super Mario 3D World and New Super Luigi U in the atriums and youth and teen centres across its fleet.

For parents keener to get the family together, the Animation Magic show at Animator’s Palate restaurant on Disney Cruise Line ships takes some beating; in fact, it even won the ‘ingenious use of technology’ award from the Themed Entertainment Association.When families are seated at their tables, they are invited to sketch their own character on a placemat; then, after dinner is served, Mickey appears on screen and conjures all the guests’ drawings – now brought to life through animation – to parade on screens alongside characters from Disney films.

Little ones even get a ‘guest animator’ nod when the credits roll, and a copy of their drawing with the ‘Official Disney Animator’ stamp of approval.

And if kids love the experience of interacting with their favourite characters, they can. Animator’s Palate also hosts Undersea Magic, where Crush the surfer-dude sea turtle from Finding Nemo swims from screen to screen holding impromptu conversations as kids eat; plus, there’s Enchanted Art dotted all over Disney Fantasy and Disney Dream, where what look like ordinary artworks are actually LCD screens, so as soon as kids pause long enough to look, the pictures come to life before their eyes.

Back on land, the tech offering is just as sophisticated, with many resorts using the latest gadgets to attract a family market. Some boast an Xbox in the teen club or provide them free of charge in family rooms. The five star Elysium in Paphos takes it a step further with a whole video game arcade. There, if youngsters’ eyes start going a bit square, they can head out for a game of tennis or even get a taste of diving with the on-site Padi centre, open to kids aged 10 and over.

One of the best uses of technology is tapping into kids’ existing interests, and who wouldn’t enjoy learning to mix their own music in a DJ booth? Beaches resorts have their signature Scratch DJ Academy, while Club Med features DJ booths in many of its Passworld teen clubs, teaching them to play, record and mix their own music. 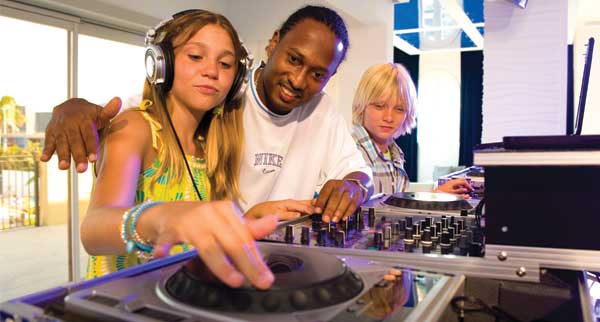 On a similar note, the Hard Rock Hotel at Universal Orlando takes music just as seriously. Ross Sinclair, Travel 2 senior product manager for the USA and Caribbean, says: “As well as suites designed especially for kids, the hotel has music-inspired tech offerings to get kids away from a screen and to try something new. They can experience what it’s like to be a DJ with the help of the Tractor Control Z1 controller, laptop and headphones, which allows you to try mixing your own songs.”

The Hard Rock Hotel Penang in Malaysia likewise offers Mix DJ sessions but also lets teens pluck one of 20 Fender guitars, so they can rock out as hard as they like – thankfully with the help of headphones, so parents can still chill out in peace.

For kids less into music and more into sports, suggest somewhere that’ll let them improve their technique.

Funway Holidays product destination manager Malcolm Davies says: “There has been a rise in hotels improving technology to provide unique experiences. Demand for tech hotels, especially in the family market, is soaring. Hotel 1000 in Seattle is a good example, as it includes a virtual golf club where you can play more than 50 of the world’s best courses without having to leave the premises.”

Which sounds like a good way to get golf-mad parents and kids on the course together, and leave any arguments over screen time at home.

Olympic Holidays offers a week’s B&B at Elysium in Paphos in a family Cyprian maisonette with royal garden view, from £1,069 per person, including flights and transfers.
olympicholidays.com

Travel 2 offers seven nights at Hard Rock Hotel at Universal Orlando, for four staying room-only in a garden view room, from £969 for travel between May 1 and June 21, including flights from Heathrow.
travel2.com

Funway Holidays offers five nights at Hotel 1000 in Seattle, staying room-only in a superior room, from £1,313 based on two adults and one child sharing, including United Airlines flights.
funway4agents.co.uk