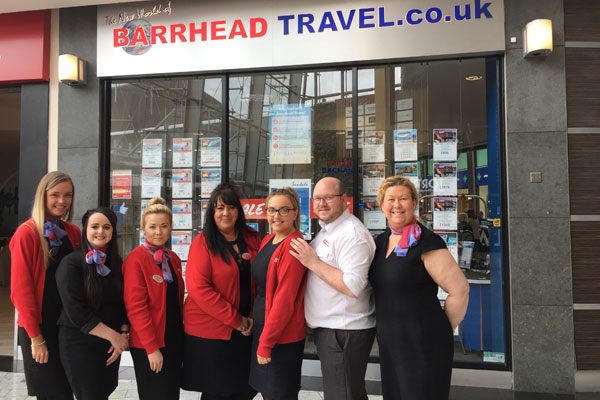 The agency prides itself on the quality of its service to higher-end customers at its store in this plush shopping mall. Ben Ireland reports.

When you go to a travel agency, you are quite literally destination shopping. But the term has another meaning in that the shopping centre itself is a destination.

Barrhead Travel, which has more than 30 branches – many of which are on high streets – is tapping into the trend with its store at the Silverburn shopping centre outside Glasgow.

The store’s look is minimalist and open‑plan, with curved desks home to little more than a computer and an agent working on it. The idea is to attract the attention of more‑discerning customers as well as cater for the simpler requests.

“Our Silverburn store is a lot more long‑haul and high-end than other branches,” says assistant manager Rylie Allen. “And the tailor‑made business is bigger.”

The Silverburn outlet is a Kuoni partner store and Sandals specialist, which gives an idea of the sort of holidays it tends to specialise in. But true to Barrhead’s independence, the staff are able, and encouraged, to use their judgement to recommend the most suitable options for customers.

“Sometimes clients don’t realise that we sell such a broad range,” says Allen.

“We sell things like UK hotel breaks as well as the long-haul trips.”

Agents are also encouraged to specialise and are made ‘champions’ or ‘ambassadors’ of particular areas, ranging from weddings to cruise and for brands such as Sandals. Travel consultant Craig Sharp is currently preparing to become the branch’s first China ambassador, with a place on a Wendy Wu Tours fam trip on the horizon.

Window displays range from long-haul multi-centre itineraries – there’s a Las Vegas and Sandals combination standing out on the day of Travel Weekly’s visit – to cruise and short‑haul holidays to places such as Benalmadena.

The displays are also designed to tie in with the various events held by Barrhead at the shopping mall. Vegas was a popular theme at the time of our visit, which came a day after an event with Travel Nevada where a bucking bronco was set up outside the shop to drum up interest, with a holiday handed to a family of four in a prize draw.

“The events really add to the footfall, which is already high,” says Barrhead regional sales manager Angela Gemmell, who managed the branch before taking on her current role. “It’s also great for the whole shopping centre.”

Barrhead managers are given licence to request their own events, such as family fun days or tie-ups with tourist boards or cruise lines.

“It generates interest,” says Gemmell. “People are going to destination shopping centres and spending their day there. It’s a great place for people to come into a travel agency because they have time to sit down and really talk to our agents and get excited about their booking. It’s never quiet, but events only add to that footfall.”

Aside from the events, there are activities for children, such as colouring‑in and sometimes face painting or balloon making, so they can have some supervised fun while their parents are ironing out the details of the next family getaway.

Virtual reality headsets are also a regular fixture, so customers can get a feel of their potential destination before they book.

Silverburn’s 23 staff work a mix of full and part-time hours, covering opening times from 10am to 9pm – the longest of any Barrhead branch. There is a mix of experience in the branch, but as Gemmell points out: “Across the business people want to get to Silverburn.

That’s because it’s a destination in itself.

Silverburn shopping centre lies three miles from the heart of Glasgow. It’s what you might call a posh mall, with more high-end shops. Barrhead Travel’s branch is the first you see as you enter, and sits proudly among its fellow shops. The store has quite some gravitas within the agency chain, Scotland’s largest independent. Staff elsewhere in the company aspire to move here. It was clear that clients tend to have slightly heftier budgets than the average Barrhead customer, but Silverburn doesn’t have any air of snootiness about it, with window displays offering the latest deals much like Barrhead’s high street shops. Service standards are high, of course, and they have to be, given the long list of ambitious agents itching to work there.

I’ve worked at Barrhead for… Three years, and at Silverburn since July 2017.

I like selling… Dubai. I went last year and am going back. I didn’t know much about it until I went.

Before travel… I’ve always been in sales, but I was fed up of selling things I didn’t like. I love my holidays, and it’s selling something that makes people happy.

I’ve been at Silverburn… For two years, and worked at Barrhead for eight.

I like to sell… Long-haul in general, which is where I go on my holidays. I’m training to be a China ambassador, which includes going on a Wendy Wu trip.

My strangest request… A regular customer asks for a new mattress at every hotel. I once arranged for four new mattresses in two rooms at a hotel in Dubai – it cost the client £1,286.

I joined Barrhead… Nearly a year ago. Before that I was working in San Francisco selling long-haul, mostly to Scotland.

I like selling… America and Canada. Having lived over there helps me know what to recommend.

I got into travel because… I’ve always travelled, it’s a way of life.