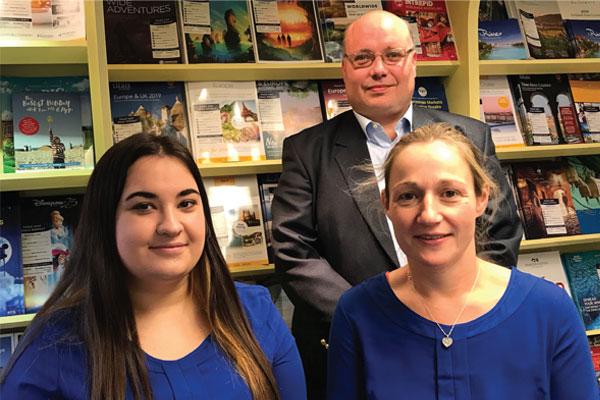 A ‘huge risk’ in changing tack has helped the Norfolk agency prosper. Samantha Mayling found out how.

If you hear a hacking cough from below the counter at Worldchoice agency Broadland Travel in North Walsham, don’t be alarmed.

Like the terrier, the agency is small but full of character, and a familiar fixture on the main shopping street in the Norfolk market town.

Nick Lee and his parents bought Broadland Travel Services in 1993, when it had branches in Stalham and the premises in North Walsham’s Market Place.

He had worked for three travel agencies, a consolidator and tour operator in London, but when his parents were looking to retire, they sought a location for a travel agency business.

They chose Norfolk, as his mother had holidayed in nearby Mundesley.

Nick was just 22 when he started with Broadland Travel, and dad Dennis still helps out with the accounts.

Unfortunately, the Stalham branch shut in 2007, after the nearby RAF Coltishall base closed the previous year.

The North Walsham shop was also beginning to struggle, so Nick took advice from a business consultant in 2010.

“We changed the focus of the business – it was a heart-stopping moment and felt like a huge risk,” recalls Nick.

He established three rules: discounting was phased out; they switched to midmarket and upmarket suppliers such as Classic Collection; and cruising and touring were promoted.

The risks paid off. Touring and cruising now account for more than 40% of business and generate lucrative bookings with the likes of Silversea and Seabourn.

They took the approach that they were all qualified professionals who needed to get to know their customers. “It’s reduced our marketing budget, as we get a lot of word-of-mouth recommendations,” says Nick.

The agency is involved in the community, sponsoring events such as the North Walsham Beer Festival, and the town’s rugby and football clubs.

Nick is a member of the local BNI business networking group and Regenerate North Walsham community interest company, and is chairman of North Walsham’s Chamber for Business.

His business roles mean Nick is invited to many events, which helps raise the agency’s profile, and he is contacted by local media such as BBC Radio Norfolk and the Eastern Daily Press for comments.

However, this summer proved tricky, as the World Cup and heatwave took their toll. Being five miles from the Norfolk coast, and close to the Broads, meant many customers headed to local beaches and waterways, rather than booking a holiday. The uncertainty around Brexit is also affecting consumer confidence.

Nick is on the management consultative committee of Worldchoice, which is part of The Travel Network Group (TTNG), and is East Anglia regional chairman, so meets with chief executive Gary Lewis, and his directors.

Through those meetings, Nick gains valuable insights, and shares his knowledge with other member agencies. “They are good at listening and respond quickly to good ideas,” he says, recalling a tip he shared about the government’s Making Tax Digital initiative.

Another weapon in Broadland Travel’s armoury is its staff’s knowledge, gleaned from fam trips, roadshows and other agencies.

A keen cruiser, Nick has experience of ocean and river cruise lines, so he knows what suits customers. He has also been on many fam trips – such as Travelpack’s trip to South Africa with KLM-Air France, and a Cruise & Maritime Voyages journey to Helsinki and St Petersburg – which help generate bookings.

“Agents at these events are professional and there’s a good atmosphere – we talk to each other and help out,” says Nick.

The agency also works with Wroxham Travel, a small independent agency – they even have their staff Christmas dinner together.

A combination of brave business decisions and old-fashioned service helped the agency ride out the past quarter of a century, and has set it on the path for the next 25 years too.

Having read headlines about high street woes, it was encouraging to see a busy thoroughfare in a small, market town.

It was a chilly, wet Monday morning, but there was a steady stream of customers popping by to check details, enquire about bookings or browse for brochures.

While Nick chatted over coffee, Becky and Natalie dealt with customers and queries. Then Nick swapped desks to deal with a regular, and they told me about their roles.

It was interesting to see traditional, handwritten cards. Natalie explained that customers tend to respond better to such offers, rather than electronic or printed posters.

Other traditional practices remain, such as luggage labels and ticket wallets, and sending postcards to returning holidaymakers.

Feedback after holidays is valuable, as clients can tell them where they had a great view from a room, or share tips about disabled access.

Customers also pop in for a chat or to bring a bottle of wine or chocolates as a thank you.

I’m looking forward to returning next month to see the Santa train display above the shop in all its illuminated glory.

If I were not a travel agent, I’d be… working in a nursery.

My favourite destination is… Disneyland Paris because it is magical at Christmas.

A customer once… brought us mixed, dried fruit back from holiday, as he thought it would be different from chocolates and sweets.

I’ve been in travel… two years.

My favourite destination is… New York has everything from seeing a Broadway show to eating true New York cheesecake.

A customer once… asked if there was an ATM in Kefalonia and if they could pack a loaf in their suitcase.

What I love about my job is… that I never stop learning.

I’ve been in travel… more than 30 years.

If I were not a travel agent, I’d be… a dancer on stage.

My favourite destination is… California, because of the movie sets and glamour.

A customer once… asked how much a ticket to heaven costs. I asked: “Single or return?”