• Thousands of travellers were left stranded when low-cost airline SkyEurope suspended flights and filed for bankruptcy. The Slovakia-based carrier began flying in 2002 and operated from Luton and Manchester.

• Abta warned agents to keep a close eye on cashflow following the sudden failure of agency Cambuslang Travel in Scotland, which had 25 staff. The company ceased trading on August 21, blaming the recession and a decline in the family market. The Millennium Travel Agency in Cardiff also ceased trading this week and The Package Holiday Company in Leeds wound up earlier in August. 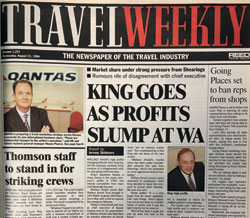 • Going Places was reported as set to follow rival Lunn Poly in banning all sales representatives from calling on its 546 shops from mid-October. The move, linked to the multiples’ focus on inhouse sales, followed the decision by Airtours and First Choice to lay off their on-the-road reps in June. 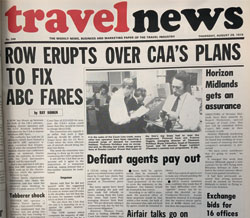 • In the wake of the Court Line crash, operators, including Thomson Holidays, reported a surge in demand for overseas holidays.

• A ruling on whether agents could refund money paid to them by Court Line clients but still “in the pipeline” was awaited by Travelnews (as Travel Weekly was then called). Despite this, many agents, including Lunn Poly, had already paid out refunds.

• Abta confirmed its planned 1974 convention in Athens was off due to uncertainty about the political and military situation in the eastern Med.

• Thomson Holidays said it would pay agents 20% commission on cancelled bookings from 1975. It also promised all UK passenger charges and foreign airport taxes would be included in prices, making them commissionable.