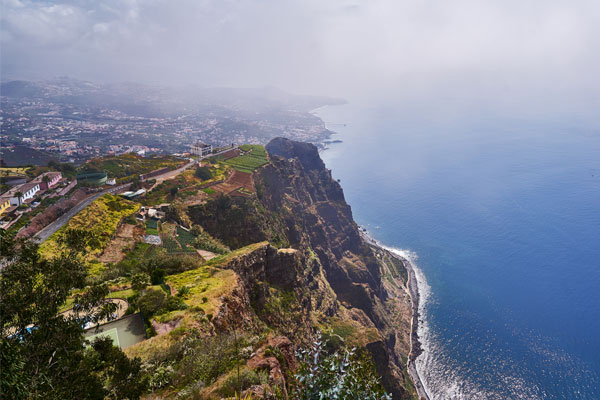 The Portuguese ladies in our group giggle as Sofia waves a wooden stick to demonstrate how to concoct ‘poncha’ cocktails.

“It’s called a caralhinho, which is very rude in Portuguese…it means ‘little dick’,” she explains, as we quaff the medicinal Madeiran medley of rum, sugar and lemon, created by explorers to prevent scurvy.

Sofia Maul is a storyteller rather than a guide. As we explore Funchal’s foodie scene on a half-day tour with Wine Tours Madeira (from €60), we learn how her taxidermist grandfather founded the Natural History Museum and her father created local beer Coral and passion fruit drink Brisa.

“I always take a food tour when I travel – nothing gets you closer to the heart of a people than their food,” she says. “The market here has changed. It’s not just for older folk, especially since low-cost airlines arrived; we see people in their 20s and 30s doing watersports, rock-climbing, canyoning, trail-running, horse riding and more. People want somewhere different, surprising, off the beaten track.” 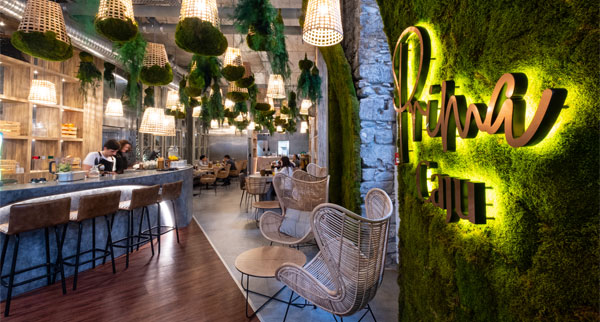 Later that day, I delve deeper into Funchal’s foodie scene, dining at Prima Caju restaurant, a trendy eatery that’s part of Caju Le Petit Hotel – a member of the Divine Hotels Collection that includes the nearby Vine Hotel.

Opened in December 2019 on the site of a market, Caju fuses ancient stone walls with modern concrete, metal and glass. It was crafted by Madeiran interior designer Nini Andrade, who also transformed the 15th-century harbour fortress into the stylish Design Centre and created chic spaces at the Vine Hotel and Savoy Palace.

“Visitors can follow in the footsteps of Winston Churchill, who was once a guest at Belmond Reid’s Palace, and Margaret Thatcher, who stayed twice at the Savoy.”

I hear about the new generation of chefs at restaurants such as Kampo by Chef Julio Pereira, and how many properties are wooing digital nomads – travellers who stay for weeks on end, mixing business with pleasure.

But Funchal also retains its appeal to more traditional sunseekers; visitors can follow in the footsteps of Winston Churchill, who was once a guest at Belmond Reid’s Palace, and Margaret Thatcher, who stayed twice at the Savoy (now the Savoy Palace, built on the original site and opened in July 2019). Alfresco afternoon tea at Reid’s Palace is a delightful way to experience the hotel’s old‑style elegance and superb views (from €36). 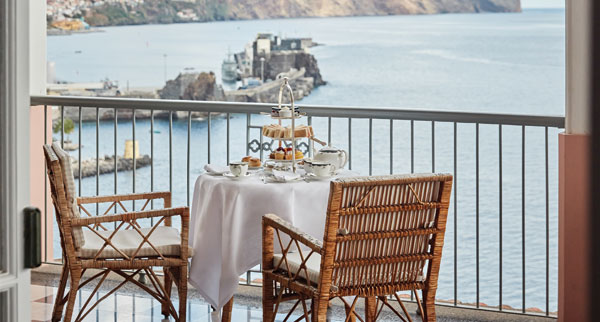 Beyond the capital, Madeira seems to be getting a name for itself among adventurous types. On a jeep tour taking in the volcanic island’s rocky peaks with local operator Hit the Road, my guide Jeff de Gouveia highlights how tourism has evolved, especially in the past five years.

“Madeira’s first tourists were aristocrats coming for their health, staying in manor houses called quintas,” he says. “Now people come for soft adventure – epic but still safe, such as canyoning and paragliding. You can be back on the beach within an hour.”

The tourist board has created a website (madeiraoceantrails.com) to highlight these more adventurous activities, emphasising how the island has developed from a destination for mature tourists and golfers to one that also appeals to younger, more intrepid travellers.

Thrill-seekers can enjoy cable car trips, hair-raising downhill rides in traditional wicker toboggans and vertigo-inducing views from Cabo Girão Skywalk, looking over some of the steepest cliffs in Europe. Hikers and wildlife lovers have their share of thrills too. I trekked along a levada – part of a network of irrigation channels – and joined a boat trip to see dozens of dolphins bounding around beside us (from €49.50 with Rota dos Ceteceos). 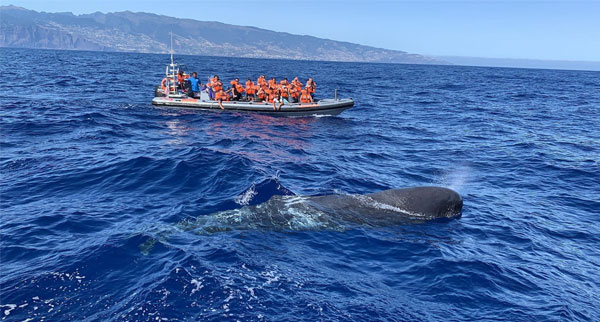 It’s not only for adrenaline-seekers, of course; families will find plenty of sandy beaches in Calheta, on the west coast, and Seixal, in the north, alongside long golden stretches on sister island Porto Santo.

Trendy types can head for the funky Maktub bar in Paúl Do Mar, located on Madeira’s eastern tip and known as one of the best spots to watch the sun sink into the Atlantic. Catering to surfers and bikers, staff serve caipirinhas while the chef uses a blowtorch to scorch snapper fish set on a salt stone.

“Families will find plenty of sandy beaches in Calheta, on the west coast, and Seixal, in the north, alongside long golden stretches on sister island Porto Santo.”

Farm stays are still popular too. We visited Quinta das Vinhas in Estreita da Calheta, an atmospheric guesthouse with an organic vineyard and 17th‑century house, plus 14 cottages and two pools. Thanks to modern roads and tunnels, the once-remote farmstead is now just 45 minutes from the airport. It has no TVs but boosted its Wi-Fi to cater for teleworkers, and aims to offer health retreats, yoga and meditation, responding to the rising trend of long-stay, remote-work trips. 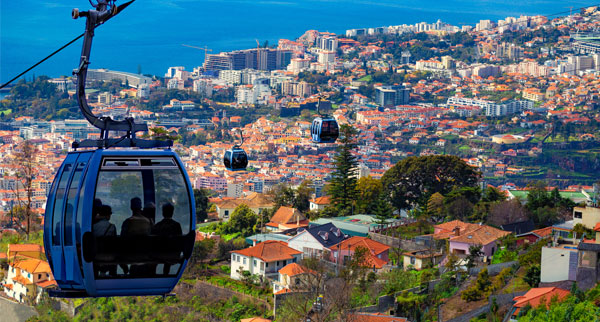 Back in Funchal, I survey some of the three million Christmas lights that are a prelude to the highlight of the year – the New Year’s Eve fireworks display, said to be one of the biggest in the world.

Usually about 10 cruise ships moor in the harbour for the fireworks, but none have stopped at the island since the start of the pandemic.

Madeira has been widely praised for its reaction to the Covid crisis and spent €12 million between July and December on its testing scheme at the airport.

“Simple pleasures like sightseeing in sandals during December or eating out in restaurants each night felt like something to be savoured.”

‘Use Mascara’ is seen on posters everywhere: it’s not urging you to put on make-up – it means ‘wear a mask’. And most people seemed happy to follow the new rules, wearing a mask most of the time, even outdoors, except for meals.

Hand sanitisers, QR code menus, the requirement to show a negative test result on arrival, and other Covid-19 measures mean there is a sense of security, enabling Madeirans and visitors to relax, share food, mingle and do all those activities we desperately miss.

Recalling my break when back in frosty England, the highlight was the warmth of the Madeirans – and the weather.

After so long stuck at home, simple pleasures like sightseeing in sandals during December or eating out in restaurants each night felt like something to be savoured.

But it was the sheer joy of meeting new people and talking to passionate ambassadors of the island that I most relished.

“Madeira has been able to position itself as one of the safest destinations in Europe, and with its mild climate, stunning landscapes and activities, it’s an ideal destination for a post-lockdown retreat. The destination is underrated and offers far more than just beaches and city, with a landscape that looks like it’s from Jurassic Park. It’s a stereotype that we’re just for the older generation – we attract lots of adrenaline seekers, and Porto Santo is a hidden gem with isolated beaches.

“About 60% of hotels are open and there is strong demand for villas. Hiring a car is easy; the airport is 20 minutes from Funchal, which makes a good base. We work closely with the UK trade and in June, 120 buyers are due to come for Connections’ first face-to-face event since lockdown. We are also hoping to release an online agent training course soon.” 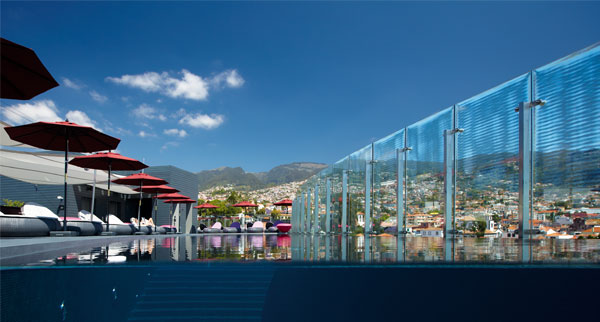 Described as urban and chic, this city-centre hotel could be in any European capital. But decor by internationally renowned designer Nini Andrade, born in Funchal, gives it an idiosyncratic flair, with curvaceous couches and wine-inspired hues.

My harbour-view room had a designer ‘cascade’ washbasin and bathtub with an integrated massage bed.

For spectacular vistas, head to the rooftop pool and restaurant to survey the compact capital’s characterful panorama.

Covid rules meant the breakfast buffet required plastic gloves, but it was a small price to pay for a five-star experience with attentive staff and stylish surroundings.

Book it: Rates start at €105 per night, including breakfast.
hotelthevine.com

Sunvil offers a week at The Vine Hotel from £869, based on two sharing on a B&B basis with British Airways flights from Heathrow and private transfers.
sunvil.co.uk