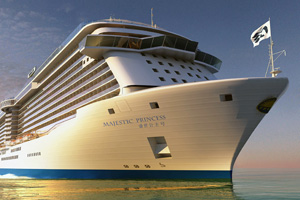 Princess Cruises’ new ship Majestic Princess is to make its debut in Europe before being deployed to its year-round base in China.

The 3,560-passenger vessel enters service in April 2017 with a short maiden season of five to 28-day Mediterranean cruises from Barcelona, Athens and Rome before moving to China in July.

Sister ships Royal Princess and Regal Princess will be among a further six ships to be based in Europe in 2017.

Regal Princess, launched last year, returns to northern Europe for cruises to Scandinavia and Russia including an overnight stay in St Petersburg.

The 3,080-passenger Crown Princess will be based in Southampton from April to September to run seven and 14-night cruises to the Mediterranean and Scandinavia.

The 3,140-passenger Caribbean Princess will operate the line’s largest British Isles season with 12 departures from Southampton including  a new late evening stay in Belfast and overnights in Dublin on selected cruises.

Both Crown Princess and Pacific Princess will offer North Cape voyages to the Arctic Circle during the peak midnight sun period around the summer solstice.

The 2017 sailings, covering 153 departures to 119 destinations across 27 countries, are open for booking on December 3 from 4pm.

Princess Cruises’ president, Jan Swartz, said: “Our 2017 Europe season is sure to inspire our guests with our newest and largest ships in the Mediterranean and northern Europe.

“We’re especially excited to debut Majestic Princess in the Mediterranean before she officially sails to Asia for her maiden China cruise season.”