The best places to eat, shop and play on a short break to the former European Capital of Culture

Croatia’s biggest port – and third-largest city – doesn’t usually spring to holidaymakers’ minds when they think of the Adriatic coast. Indeed, there might have been some head-scratching when Rijeka – often seen as little more than a gateway to the Kvarner Gulf islands of Krk, Cres, Rab and Lošinj – became the 2020 European Capital of Culture.

But this city has always had a lively cultural life, with a handsome 19th-century national theatre, boundary-stretching contemporary art, a buzzing alternative music scene and some fine museums. Add to that a delightful mishmash of historical influences and a cosmopolitan atmosphere and you have a city that appeals on many levels. 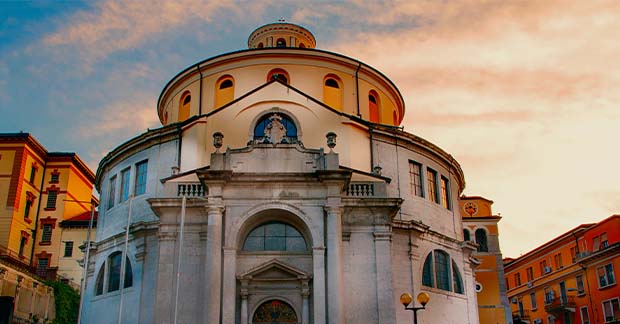 09:00: As befits Rijeka’s status as a major port city, it is not surprising that it’s also home to Croatia’s most impressive fish market. Fittingly, the building resembles an art nouveau temple to seafood, with arched columns, marine sculptures and fancy fish fountains. The bounty of the Adriatic is laid out on slabs of Istrian stone. There are two other indoor markets for meats, cheese and other delicious local produce, along with outdoor stalls under colourful umbrellas.

10:00: Stop for coffee on main promenade Korzo. A stroll along this pedestrianised artery reveals the city’s past when it was one of the Austro-Hungarian Empire’s main ports, with stately Habsburg buildings and sprawling cafe terraces flanking the broad thoroughfare.

Italian influences are just as visible – a legacy of being part of Italy for the early years of the 20th century. Food lovers will find a delectable blend of central and southern Europe, mingling Austrian, Hungarian, Italian, Turkish and typically Croatian flavours.

There’s a wide range of international chains and local shops squeezed in among the Habsburg and Secessionist townhouses, along with a few Tito-era buildings. Korzo is the focal point of the city’s celebrations, which include the boisterous February carnival, the largest in Croatia.

11:00: Take a tour of the 1885 Croatian National Theatre, an elaborate Italian-style opera house that takes after its larger counterparts in Milan and Parma. Look up and you’ll spot paintings by a young Gustav Klimt as well as works by his brother Ernst. Lovers of opera and classical music can take advantage of some of the cheapest ticket prices in Europe. 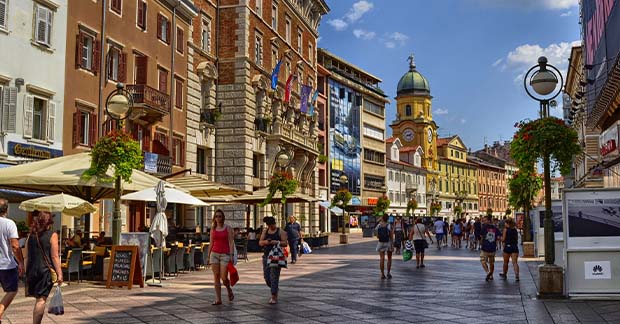 14:30: Many of Rijeka’s cultural sights are clustered within a relatively compact area. Walk under the City Clock Tower off the Korzo towards the 17th-century rotunda that is the Cathedral of St Vitus, passing a few Roman ruins along the way. Carry on to the Natural History Museum, with its multimedia aquarium.

Just a few metres away is the elaborate former governor’s palace that is now home to the Maritime and History Museum of the Croatian Littoral, which is a good starting point if you want to understand some of Rijeka’s complex history.

There’s more of that on offer nearby at the Museum of the City of Rijeka. Things take a decidedly quirky turn at Peek&Poke Museum, a warren of vintage gadgets, computers and video games.

18:00: Take a wander down the Riva waterfront promenade before the sun goes down on the wonderfully ornate neo-baroque Adria Palace. Share a fish platter or order a generous steak in truffle sauce at the Gardens Bar overlooking the harbour.

20:00: Head back to Korzo for a nightcap on one of the cafe terraces, including sophisticated Caffe Bar Filodrammatica or the convivial Fiorello Pub. 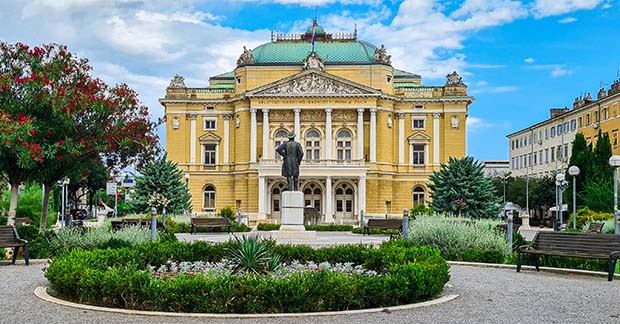 10:00: Clients who fancy a bit of a hike can tackle the 538 stone steps at Trsatske Stube behind the Hotel Continental. These lead to one of Rijeka’s most compelling attractions, Trsat Castle. This sprawling 13th-century fortress is free to explore and is one of the best places for sweeping views of the city and the Kvarner Gulf.

There’s also a bus from the city centre to Trsat. A few minutes’ walk away is the Franciscan monastery and shrine to Our Lady of Trsat, a popular place of pilgrimage, and the adjoining gardens are a tranquil attraction to wander.

13:00: Head back towards the harbour near the fish market for a sumptuous seafood lunch at Konoba Na Kantunu. Make your choice from the day’s catch swimming around in a large tank.

15:00: While other beaches in the Kvarner Gulf vie for clients’ attention – particularly those on the islands – holidaymakers can still combine city and beach in Rijeka and its immediate surroundings. Just to the west of the main port is Ploče beach, which also features a large indoor-outdoor swimming pool.

For something more rustic, go east to the six miles of beach at Kostrena.

20:00: After a pre-dinner stroll along the Molo Longo pier that faces the harbour, fill up on seafood fritto misto in the funky surroundings of Boonker restaurant on the Riva.

Pair Rijeka with the Opatija Riviera

While Rijeka has several long stretches of beaches, it’s also easy to combine a visit to the Opatija Riviera to enjoy some Habsburg elegance by the Adriatic. Located a 30-minute drive from Rijeka, the Opatija Riviera is the birthplace of Croatian tourism thanks to the Habsburgs’ desire for a seaside playground.

The town of Opatija is the centrepiece, filled with absurdly pretty and elegant 19th-century villas and numerous coves and beaches. There’s a palpable air of wellbeing and relaxation – possibly a combination of beautiful architecture, an agreeably slow pace of life and the calming deep blue of the Adriatic.

The lavish gardens of the Villa Angiolina are an inviting place to start a tour, as the park also includes the Croatian Museum of Tourism. A stroll along the Walk of Fame reveals a stone wall with huge portraits of illustrious regular guests, including Gustav Mahler, Albert Einstein, Isadora Duncan and James Joyce.

There’s a palpable air of wellbeing and relaxation

Towards the seafront is the summer open-air theatre as well as one of Opatija’s bigger beaches. Follow the path to Opatija’s compact harbour, where the Bistro Yacht Club provides a delectable introduction to the fresh seafood caught daily by Kvarner fishermen. Along the Opatija Riviera lies one of the most enjoyable trails of the Adriatic.

Starting in the attractive fishing village of Volosko, the Lungomare wiggles along the coast past Opatija and down to the village of Lovran. It’s hard to find a more pleasant way of exploring the coastline and getting to know its appealing villages, including Ičići and Lovran itself, which has a tiny and enchanting old town to discover.

Clients who don’t want to do a round-trip can just hop on a bus back to their starting point. Hovering over the coastline is the Učka Nature Park, where hiking and cycling trails meander along to breathtaking mountain viewpoints.

Book it: Prestige Holidays has a seven-night package to Opatija from £639 staying at the four-star Remisens Hotel Admiral, including flights and transfers, departing in May 2022.
prestigeholidays.co.uk 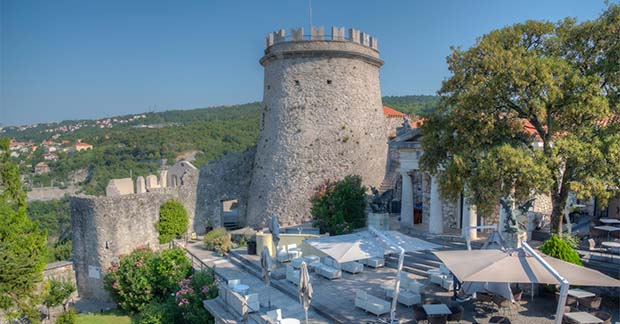 Five of the best solo trips for travellers on a budget
Explore the Balkans for a crowd-free escape
Ask the experts: How has the pandemic re-shaped city breaks