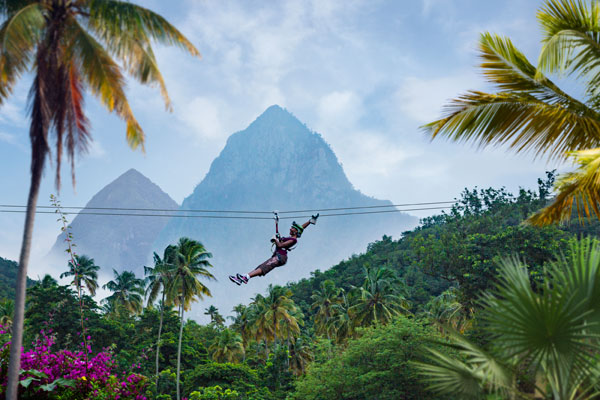 Fred Olsen is adding a shot of adrenaline to its Caribbean excursions discovers Mike Walsh on an agent fam trip.

These were the words of advice from Andre, our safety instructor, as I prepared to jump off a platform high up in the trees above a river in Saint Lucia.

With one hand gripping the harness and the other the overhead cable, I stepped forward into thin air. In an instant, I was flying.

Brushing through a canopy of mango, coconut and banyan trees, I picked up speed and was soon hurtling thrillingly over the river below, before touching down, Tarzan-like, on the next platform. I had held on tightly, but Andre’s advice had been in jest.

The zipline at Morne Coubaril Historical Adventure Park is extremely safe and there are no fearsome creatures waiting to devour participants in the unlikely event of a brush with water.

This zipline flight was just one of a sequence of eight at the park, part of an excursion offered to passengers on Fred Olsen Cruise Lines’ sailings in the region. Yes, you read that right. The ex-UK cruise specialist has been quietly pepping up its on-shore options with soft adventure activities in a bid to broaden its appeal beyond its loyal older clientele. That shift is set to continue when its Caribbean fly-cruises – which went on sale this month as part of a new 2022-23 programme – resume next year, using Havana as a new turnaround port from January 2023. 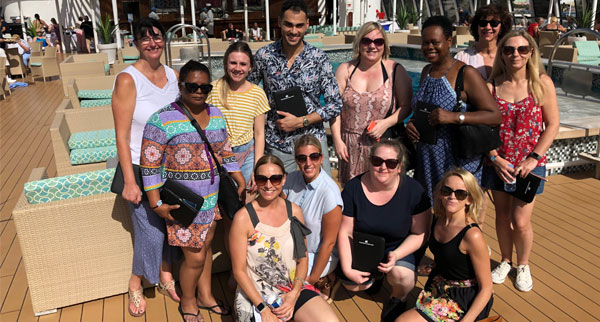 Our next Saint Lucian stop required a different sense of adventure – a willingness to get covered in mud. Not any old soil, of course, but warm, geothermal mud with reputed therapeutic qualities. Sulphur Springs Park at Soufrière has been a tourist attraction since the 1980s but the opening two years ago of three new mud pools has greatly enhanced its appeal.

“As sulphur steam rose from the surface, I marvelled at this volcanic phenomenon that provides such a rugged contrast to Saint Lucia’s beautiful beaches.”

I slathered my skin with the squishy brown stuff and sank into the enveloping warmth of the water. As sulphur steam rose from the surface, I marvelled at this volcanic phenomenon that provides such a rugged contrast to Saint Lucia’s beautiful beaches – while silently wondering if the mud would ever come off.

In truth, few of my fellow Fred Olsen passengers had opted for this dermatological delight – and even fewer for the zipline adrenaline rush – but no matter. The adventurous options were there for those who liked them.

Watch video highlights of the Fred Olsen Cruise Lines and Caribbean Tourism Organisation mega-fam trip, which took place prior to the pandemic, at bit.ly/focl-cto2019

In Antigua, a popular excursion – or tour, as Fred Olsen prefers to call them – was the Island Safari. This was a sightseeing drive, but instead of being transported in an air-conditioned minibus, we were carried in the back of an open-sided Land Rover, which made for another exciting hold-on-tight experience.

“This was a sightseeing drive, but instead of being transported in an air-conditioned minibus, we were carried in the back of an open-sided Land Rover.”

Our tour took us along bumpy roads through rural Antiguan villages, the island’s rainforest and on to English Harbour. This is where the British navy was stationed in the 1700s and where Nelson’s Dockyard remains a big attraction.

Elsewhere, our guide, Trevor, pointed out two sights associated with a local legend: the Sir Viv Richards Cricket Stadium, and the street in capital St John’s where the West Indies batting superstar grew up. This was followed by a swim at the beautiful and deserted Turners Beach. 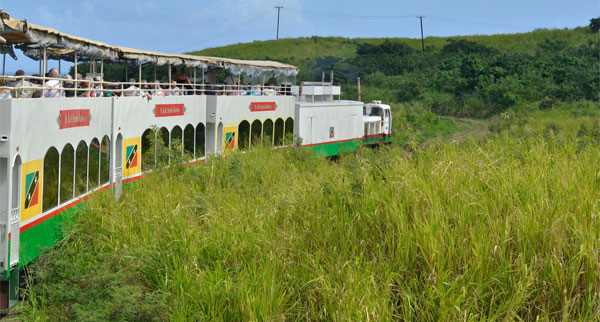 In St Kitts, the mainstay of Fred Olsen’s day-trip options – and that of most cruise lines – is the stunning St Kitts Scenic Railway. This is a more traditional tour experience and one eagerly lapped up by my fellow Braemar passengers.

The narrow-gauge track was built in 1912 to transport sugar cane, but when that industry folded, the railway was transformed into a tourist attraction. The 18 mile journey provides magnificent views of the island’s lush interior and spectacular coastline, whether you are seated upstairs in open-air carriages or downstairs in air-conditioned comfort. The remnants of brick chimneys, scattered across the island on former plantations, are a reminder of the sugar cane era that spanned 400 years.

The chimneys were used to boil the cane juice, before it was fermented and crystallised into sugar. The journey was enlivened by the train’s four singers, who periodically regaled passengers with the likes of Christmas carol Joy to the World and calypso song Shame and Scandal in the Family.

In Barbados, more soft adventure was on offer, this time underground. Harrison’s Cave is a network of caverns packed with spotlighted stalagmites and stalactites. The attraction has been lavishly modernised in recent years and helmet-wearing visitors are carried through the 1.5 miles of passages by tramway.

One stalagmite-stalactite pair – still some four metres apart – are due to fuse in 20,000 years’ time. Free entry was promised for any visitor who returns then. 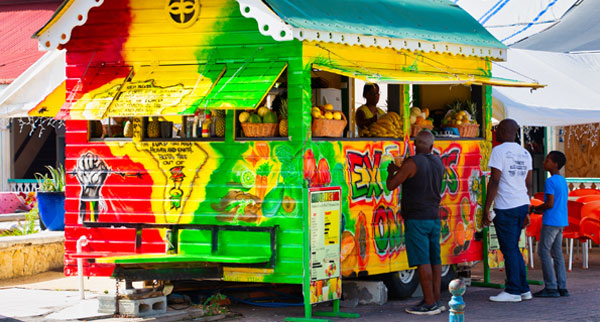 Other adventurous excursions during the cruise included river tubing in Grenada, deep-sea fishing in St Kitts and racing in an America’s Cup yacht in Saint Martin. These sorts of options complement the mainstay sedater tours, such as rum tastings, museum visits and cookery demonstrations.

The Braemar passengers I spoke to liked the diversity of tours offered by Fred Olsen across the six Caribbean islands, even if take-up of the more energetic options was rather limited.

But for Fred Olsen, it’s all about giving passengers more choice in ports of call. Three years ago, the line introduced rib boat excursions to “take passengers even closer”, and each of its four ships now carries two of these boats. Kayaking is also offered in some destinations.

“Adventurous excursions during the cruise included river tubing in Grenada, deep-sea fishing in St Kitts and racing in an America’s Cup yacht in Saint Martin.”

And the options aren’t limited to set tours. Kate Wooldridge, the line’s sales services and communications manager, explained: “Our destinations team in Ipswich can create bespoke excursions for individuals or groups. Agents just need to contact us.”

Referring to the seven cruise specialist agents on the mega-fam, Wooldridge added: “It’s been great for them to experience a small ship in the Caribbean and to see the variety of excursions and destinations.”

Like the nutmeg, cinnamon and cloves that abound in Grenada, Fred Olsen is making a good job of spicing up its Caribbean cruises.

“I’d recommend Braemar to customers who’ve been on bigger ships but are now looking for something smaller and quieter. The crew make it so special – they treat you like family.”
Julie Collings, formerly Thornton’s Travel

“I’d recommend this for older passengers who are reasonably active and for whom dining is important. And with Braemar being a smaller ship, getting off and on for excursions is so much easier.”
Anne Knight, Flamingo Travel

“With smaller ships, Fred Olsen sailings get you right into the destination. Some of the excursions are quite active – the line has some work to do to change perceptions that it is only geared towards older passengers.”
Debi Phillips, formerly Newell’s Travel

“Cruising is a fantastic opportunity for visitors to sample the Caribbean and decide which destination they would like to return to for a longer stay by having experiences that allow them to distinguish one port from another, which is why we were pleased to work with Fred Olsen on its Caribbean mega-fam.

“There have been many changes across the Caribbean over the past 12 months and destinations are readying themselves to receive visitors. Emphasis will be placed on testing prior to and on arrival, completion of health records and having adequate travel insurance in place.

“That said, we eagerly await the return of tourism. We know there will be stricter travel guidelines, but the benefits will include more outdoor experiences, beautiful beaches for social distancing and an abundance of wellness activities.” 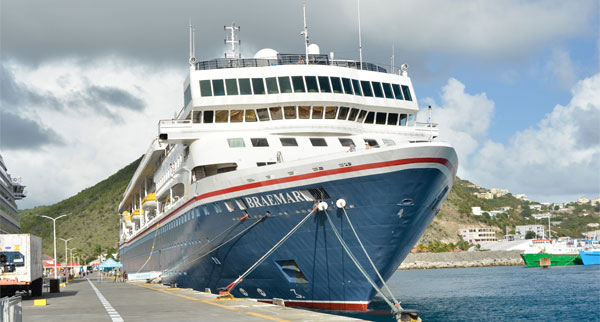 Being an older ship, Braemar may lack a certain wow factor when moored alongside gleaming new-builds – despite a dry-dock refurb in 2019 – but on board its old-school charm is unmistakable. With capacity for just 929 passengers but no shortage of space, it has a distinctly British ambience.

The public areas are light and comfortable, and pleasingly lack the excessive glitz of modern ships. The food and service in main restaurant Thistle was unfailingly good, but it was trumped by speciality dining venue The Grill. I also lapped up the entertainment in the Neptune Lounge – a singer, magician and band – plus there’s a good gym, pool, library, blackjack table and Wi-Fi throughout (with rates ranging from £9 per day up to £26 per hour, depending on the package purchased). But beyond the facilities was something else: a tangible sense that crew and passengers alike had found their home at sea.

Book it: A 16-night Islands of the Caribbean sailing on Braemar, departing Southampton on December 6, 2022, starts at £1,799 based on two sharing an interior cabin, including flights from Barbados.
fredolsencruises.com