In the space of one evening, I’ve seen a high‑energy show in the theatre, danced under a new moon at a silent disco on deck, gasped at a dazzling trapeze act and ended up in a sultry little nightclub watching a live band.

Welcome to P&O Cruises’ new Iona, a ship that brings a sizzling new energy to the offering of this long-established cruise line. I joined the maiden voyage, sailing from Southampton and cruising the coast of the UK.

Measuring 185,000 tons and carrying 5,200 passengers, this is the biggest ship ever built for the UK market. Iona is, however, greener than most other ships this size, powered by liquefied natural gas, which produces fewer emissions than traditional fuels.

The heart of the ship is the dazzling Grand Atrium. Walls of glass on both sides span three decks, flooding the area with light, while white marble and gleaming chrome add to the sense of elegance and space.

In fact, the decor throughout the ship is muted and tasteful, with the interior design taking inspiration from the seaside, with shades of sand, pale oak, stone and white, and splashes of gold and navy. 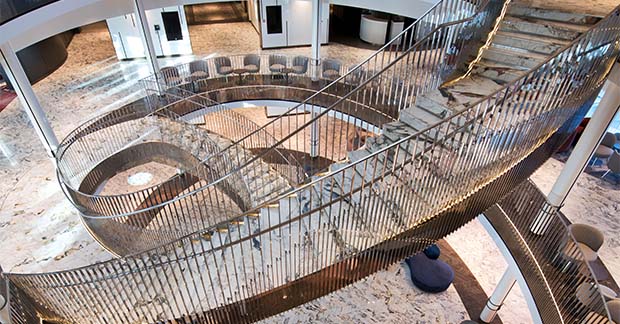 Iona comes with a lot of features new to P&O Cruises. One addition is 95 Conservatory Mini Suites on decks eight and nine, with a glass-enclosed lounging area between the main cabin and the balcony. This ‘conservatory’ can be opened out to create a much bigger balcony, or closed to create a private space with sea views.

Iona will spend next summer sailing the Norwegian fjords and these cleverly designed cabins are likely to sell fast. Steer clients towards deck nine; the accommodation on deck eight opens onto the promenade deck, so there’s less privacy and less connection to the sea.

The new SkyDome is another focal point, curving over a space two decks high and with an indoor swimming pool and retractable stage at its centre. The dome is rigged with trapezes for dramatic aerial shows, which take place three times a night.

Eventually, shows will be interspersed with DJ sets created by former Blur bassist Alex James, turning the SkyDome into a giant nightclub. For now, though, Covid protocols mean there’s no dancing indoors apart from the socially-distanced ballroom classes held in the Limelight Club.

The dome is rigged with trapezes for dramatic aerial shows, which take place three times a night

Another new venue that’s almost a victim of its own success is the 710 Club, a dark, cosy little nightclub masterminded by Gary Barlow, who is due to join several sailings in 2022. Word quickly spread about how good the bands were – the group I saw did moody acoustic covers of rock anthems. Even with three sets a night, there were queues of 30 minutes to get in. 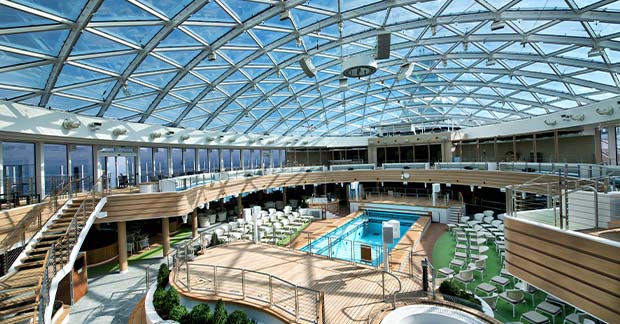 During the day, there’s plenty to do. The kids’ clubs, split into five age groups from six months to late teens, are superbly equipped. Other activities include deck games, a gym and four pools, including two gorgeous infinity pools on the cascading aft decks.

As well as pub quizzes in Brodie’s and talks in the theatre, a new boutique four-screen cinema offers a daily changing programme. Iona even has its own gin distillery, in association with Salcombe Distilling Co, making the ship’s signature Marabelle gin on board.

All dining is open seating, with several of the 30 venues bookable by the My Holiday app, which was suffering considerable teething problems on my cruise. Of the four main dining rooms, Coral and Pearl – with sweeping views of the ship’s wake – are the nicest.

Iona even has its own gin distillery, in association with Salcombe Distilling Co

Of the other speciality restaurants, Epicurean, high up on deck 17, was my favourite for its serene atmosphere and fine dining – wild Atlantic halibut with poached fennel, and a fluffy cheese soufflé, well worth the £28 cover charge. The Limelight Club is great value too, at £25 for an excellent three-course set menu with cabaret entertainment, which included brilliant drag artiste La Voix on my cruise. Not so good, though, was the posh Indian, Sindhu, which wasn’t as impressive as when I last experienced it on Britannia.

Two hits among the new dining options were Hook, Line & Vinegar, producing top-notch fish and chips, at no charge, and the Keel & Cow, a gastropub serving dry-aged steaks and a whopping burger called The Prime Minister, a feast in itself, for £8.50. 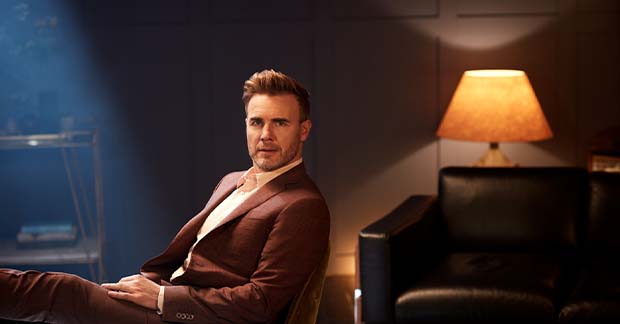 My top advice for clients is to book everything you want to do at the beginning of the cruise. Midway through my seven days, all the speciality restaurants were fully booked, and that with Iona only half full because of Covid restrictions.

Speaking of which, there are a few changes P&O Cruises regulars will notice. Everybody is tested for Covid at Southampton. For now, mask-wearing is required for walking around the ship. Evening turndown service has also gone, which according to our cabin steward was “because of the protocols”.

Essentially, though, Iona is offering something completely new for P&O Cruises’ British customer base. Traditions haven’t been forgotten, such as kettles in the cabins, beers on tap and weekly formal nights. But this is certainly a ship for the younger market: fun, lively, family-friendly and, above all, packed with choice. 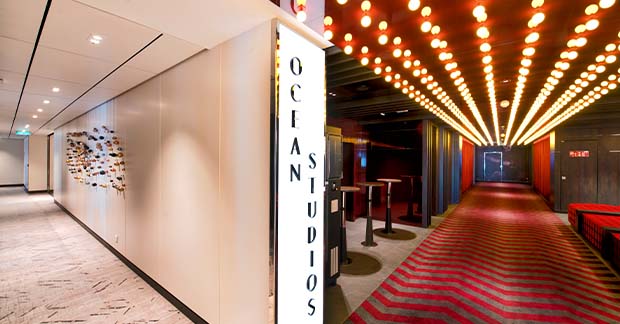 A 14-night Canary Islands sailing on Iona, round-trip from Southampton departing November 13, 2021, starts from £899 based on two sharing an inside cabin, including full-board dining.
pocruises.com