Q. You set up Travel Buddy as a social media travel agency in 2016. How and when did business take off?
A. My business partner, Darren Morris, and I set it up as a villa specialist. Our first booking was a villa in France. We made £70 and were ecstatic. In the first year of trading, business was just ticking by. Then in 2017, we posted an offer for a villa rental in Lanzarote. It was the same time as Love Island and a similar villa to the one on the programme. The post went viral: three million people looked at it in four days.

We had 800 enquiries and in a week went from 8,000 to 18,000 likes on our Facebook page. That was a turning point. I’d had no idea the villa looked similar to the one on Love Island but it was because it had a swimming lane. We got about 10 bookings but it generated enquiries for lots of other bookings. We also had a US villa offer that went viral and had three million people look at it in a week. Off the back of that we got a £40,000 booking from a Premier League footballer. It was easy when we first started the business to get likes and grow organically. It would be impossible now; Facebook has changed so much.

“We had a US villa offer that went viral and had three million people look at it in a week. Off the back of that we got a £40,000 booking from a Premier League footballer.”

Q. How did you cope during lockdown last year?
A. It was very tough. Having each other really helped. We’ve been friends for 12 years. When everything started, we thought it would blow over. When the first lockdown happened, many high street agencies tried to build up their social media presence and it was hard for them to generate new business. This is where we won. From the beginning, our thought process has been that everything we do will be social media. Usually the conversion rate is high. You send out quotes and an hour later they are booking; it’s how social media works now.

The worrying time was from March to May last year; there were lots of tears and sleepless nights. It wasn’t until the end of May that we turned a corner and bookings started to increase. We started working with Blue Bay Travel in July and now have a nice relationship with them. During the pandemic we were also the only agency to achieve Chairman’s Royal Club status with Sandals and Beaches. It was a huge accolade.

“The worrying time was from March to May last year; there were lots of tears and sleepless nights. It wasn’t until the end of May that we turned a corner.”

Q. You adopted a policy of amending all bookings for up to six months in advance. How did that help?
A. In November, we realised the pandemic definitely wasn’t going to blow over. I had a meltdown; everyone wanted cancellations and their money back. I thought ‘here we go again’. I decided that instead of waiting for balance due dates I would ring up all customers departing in the next six months and tell them it would probably not go ahead and suggest we move the holiday to a later date. I spent from the end of December to February just amending bookings while Darren focused on new sales. It was heartbreaking but it paid off because now they are travelling. We saved so many bookings! It meant our cancellations were as low as they could be. It would have been worse if we’d waited until the balances were due.

“I spent from the end of December to February just amending bookings while Darren focused on new sales. It was heartbreaking but it paid off .”

Q. Tell us about the decision to open a shop this year.
A. We are Bristol-based and have never concentrated on our local area. Darren wanted a shop. I was always dead against retail premises, but in mid-February we both agreed the next step was to have a shop. I googled ‘shops for lease’ and one came up in Hanham Street on the outskirts of Bristol. We went to view it and got a five-year lease. We agreed to pay one year up front, which was painful, but being a new name on the high street it was important not to have any pressure [financially].

We blew our refurbishment budget but I wanted the shop to be right from the start. We have done it out as a luxury agency. There is no competition, only Tui and Hays a few miles away. It’s already making money for us.

“We have been a really successful business from a social media point of view – though family and friends never took us seriously until we opened the shop!”

Q. Do you ever envisage further expansion?
A. We are on track for a good year.  If we go back to a ‘new normal’ and things are on the up, then this time next year we may think about a second store. We have been a really successful business from a social media point of view, especially in the last 24 months – though family and friends never took us seriously until we opened the shop! 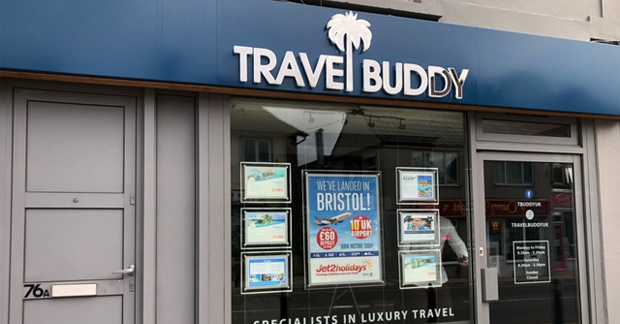 Q. What’s business been like in your shop since you opened in July?

A. Feedback has been great from the get-go. I see a lot of agents who have had to get other jobs to survive. We are lucky we are not in the same situation. We are still finding our feet but we’ve had lots of different types of enquiries, from a booking for a group of eight for a cricket Test match in the Caribbean next year to bucket-and-spade bookings with Jet2 and easyJet holidays.

On the day we opened the shop, we had a £14,000 booking and others, including one for £7,500. We are still getting types of customers we want. We have LED backlit cards in the shop window and rotate window offers to get people through the door. We’re hoping to do events with tour operators to get local people involved and start promotions such as ‘Prosecco Saturdays’ where you get a glass of Prosecco  when you come in for a chat about a booking.

Carnival Cruise Line brings half of fleet back into service