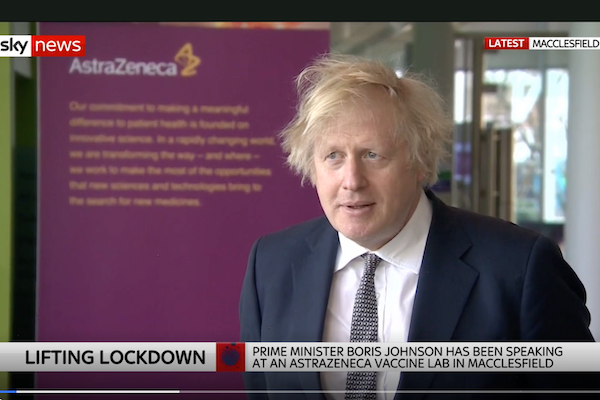 The government confirmed on Monday that a traffic light system will be introduced to categorise countries for international travel to and from England, with the earliest possible restart date of May 17.

There will be a ‘green’ list of countries to which holiday traffic is permitted without quarantine restrictions – but with pre-departure Covid tests required before travellers return to the UK and a second test on arrival.

Speaking to Sky News, the prime minister responded to a call from the boss of easyJet to allow people to use lateral flow tests – rather than more expensive PCR tests – as part of border requirements when returning from abroad.

Johnson said: “I raised that very issue myself yesterday. I do think we want to make things as easy as we possibly can.

“I think the boss of easyJet is right to focus on this issue. We’re going to see what we can do to make things as flexible and as affordable as possible.”

He added: “I do want to see international travel start up again. We have to be realistic – a lot of the destinations that we want to go to at the moment are suffering a new wave of the illness, of Covid, as we know.

“We can’t do it immediately, but that doesn’t mean we’ve given up on May 17. We’ll be saying as much as we can, as soon as we can, about international travel.

“I know how impatient people are to book their holidays if they possibly can. But we just have to be prudent at this stage.”

Johnson has already announced that, from Friday, everyone in England will be able to access free lateral flow tests twice a week to help prevent new outbreaks.

easyJet chief executive Johan Lundgren said on Tuesday morning that PCR tests, which are currently required for international travellers, are more expensive than the average easyJet fare. He was also concerned that travel to countries on the green list will require a two-test regime.

“If they choose, however, to go down that route to have the testing in place, it should be the same type of testing, the lateral flow testing, which is much cheaper, more accessible, that is being used to open up the domestic sector as an example.”

Dame Irene Hays appeared on BBC Breakfast after Lundgren and was also asked about the cost of testing.

“It’s a very mixed picture. Many of our customers would be very happy to pay for a test,” she said.

“Many, if they are going away in a family group, would find that cost prohibitive so I do think that Johan’s point about it being a lateral flow, which we know is be much more reasonable and much easier, is a good one.”

She said the government’s plan for a traffic light system is a “promising start”.

Kelly Cookes, leisure director at Advantage, also spoke to Sky News on Tuesday about the resumption of international travel.

She said PCR tests cost at least £80 so they increase the cost of a family holiday by “significant” amount, so lateral flow tests would be a more accessible and flexible alternative, especially as they are working on a mass scale in schools.

Furthermore, Virgin Atlantic chief executive Shai Weiss said that those travelling to and from ‘green’ countries should not face testing, and, where pre-departure testing is required, it has to be based on rapid testing.