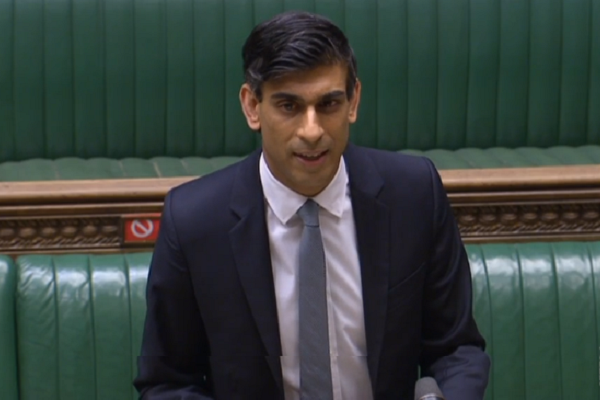 For industry reaction to the chancellor’s Budget statement as it comes in, click here.

Chancellor Rishi Sunak has confirmed the extension of the furlough scheme and business rates relief in his Budget.

Furlough has been extended to the end of September, as has support for the self-employed.

Sunak said: “The government is proud of the furlough, one of the most generous schemes in the world”.

He confirmed it will remain with no changes until July, after which businesses will be asked for a 10% contribution, rising to 20% in August and September.

He said a “major improvement” to access to support self-employed support would mean more than 600,000 people, mainly those who became self-employed in 2019-20, who could not access it last year will be able to claim the latest grants.

The existing business rates holiday has been extended for three months, until the end of June – and, to April 2022, rates will be discounted by two thirds, up to a limit of £2 million per premises – with a lower cap for businesses that have been able to stay open.

The extensions come alongside confirmation of another trailed policy, to pump £5 billion into kickstarting high streets.

Sunak said non-essential retail, which could open from April 12, will be eligible for grants of up to £6,000 – and hospitality and leisure businesses, which can reopen later, are entitled to up to £18,000.

The reduction of VAT rates for hosptiality and tourism to 5% has been extended to September 30, and for six months after that will be 12% – lower than the 20% standard rate from before Covid that will return in April 2022. Sunak said this amounted to a £5 billion VAT cut for businesses in hoapitality and tourism.

Sunak also announcd a Recovery Loan Scheme to replace the existing government-guaranteed schemes which close at the end of March.

He also doubled the cash incentives offered to firms who take on apprentices, to a £3,000 payment per hire – and committed £126 million of “new money” to enable 40,000 more traineeships.

One of the most hotly-anticipated Budgets in years came a year after Sunak commited £12 billion to the Covid response in his first Budget – a figure that has snowballed to more than £280 billion – and a 10% shrinking of the UK economy.

Other measures announced by Sunak include a continuation of the £20 uplift in Universal Credit until September, and a government guarantee on mortgages. The National Living Wage will rise to £8.91 from April. Sunak said the additional measures accounted for £65 billion, with total Covid support measures this year and next now standing at £352 billion.

Eight freeports were also announced, including at cruise hubs Southampton and Liverpool, and East Midlands airport.

The Office for Budget Responsibility expects the economy to grow by 4% this year, and to return to pre-pandemic levels by the middle of 2022, six months earlier than it predicted in November. But it also forecasts that over the next five years the economy will be 3% smaller than it would have been.

Forecasts show the UK government has borrowed £355bn this year, Rishi Sunak said. Next year this is expected to be £234 billion, he added.

He announced Corporation Tax will rise to 25% from 2023, cancelled a tax rise on alcohol and froze fuel duty.

Sunak also announced a new UK infrastructure bank in Leeds, and a series of “help to grow” schemes to support people to get management training and train small business in digital skills.

He also revealed plans for a “super-deduction” on tax for companies investing – which can reduce their taxable profits by 130% of the cost of their investment, and offshore wind projects in Teesside and Humberside.

An additional £1.65 billion was set aside to continue to UK’s Covid-19 vaccine rollout.

Labour leader Keir Starmer said the Budget “papers over the cracks” and was “nowhere near ambitious enough”.