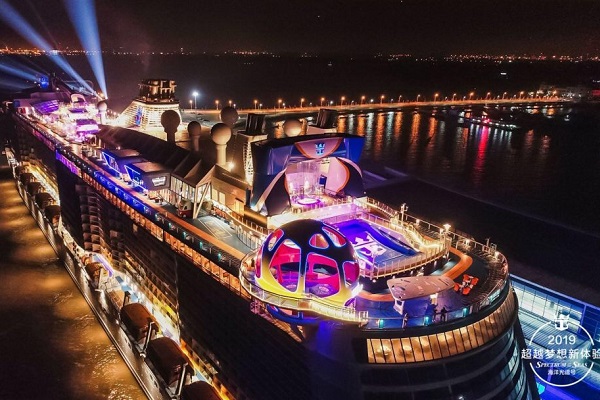 Royal Caribbean International has christened its 26th ship, Spectrum of the Seas, in her homeport of Shanghai.

Hundreds of international media and agents gathered onboard the cruise line’s first Quantum Ultra class vessel on Monday, June 3 for the naming ceremony with its godparents, Asian actors Huang Xiaoming and Angelababy.

Performances included tasters of the ship’s shows The Effectors and ShowGirl!; a song by S Future Children’s Choir; and a blessing from Seafarers UK’s Reverend Steven Miller.

Royal Caribbean president and chief executive Michael Bayley said the celebration marked the life of a new ship, as well as the line’s “accomplishments” in China.

“Look how far we’ve come since we first opened our office in Shanghai in 2009, there were very few success stories in this market as noteworthy as our decade-long journey with Royal Caribbean.

“And here we are, China’s leading cruise line welcoming the largest and most expensive ship Asia has ever seen.”

Bayley said the line has “leveraged guests’ feedback and research”, with the ship now offering a broad range of themed restaurants, the latest technology and “ground-breaking” entertainment.

Spectrum of the Seas also brings a new line of luxurious suites, including the largest ultimate family suite in the fleet and the first private enclave for suite guests featuring dedicated restaurants, an exclusive lounge and private shopping.

“There is something for everybody onboard Spectrum of the Seas,” Bayley added. “The vessel is exceptional, she breaks the mould in a sea of sameness and she does it beautifully well.”

The same evening, the ship set sail on her inaugural sailing for a three-day trade cruise around Shanghai.

From Thursday, the 4,246-passenger ship will sail to Osaka, Kobe and Tokyo until June 13.

Royal Caribbean will not base Spectrum of the Seas in UK