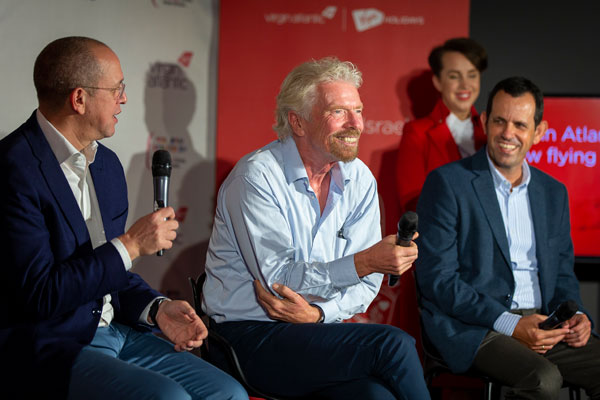 Sir Richard Branson has predicted that the aviation sector can, in the future, be 100% fuelled by renewables.

Speaking in Tel Aviv after a flight celebrating Virgin Atlantic’s direct route from London, he said the airline had been talking to a number of companies about various options to power aircraft with green energy.

At the same press conference, chief executive Shai Weiss said he was due to speak to a company manufacturing electric aircraft during the trip to Israel.

When asked if 100% renewable flying was possible, Sir Richard said: “The answer is definitely yes.

“We have been working with various different companies; one that takes the waste product from steel and aluminium plants that would otherwise go up the chimney into the air, recycles it and turns it into jet aviation fuel.”

He said the firm, which he didn’t name, has been certified for its fuel to account for 50% of power on a Virgin Atlantic Boeing 747, alongside ‘normal fuel’. “Boeing say they can get up to 90%,” he said, adding: “that’s just one example”.

“In the future we can actually get to a situation where the airline industry is sustainable and people won’t have to feel guilty when they are flying.”

Weiss was asked about the wide Virgin Group’s investment in Israel following the introduction of the Heathrow-Tel Aviv route when he said: “I will be interviewing the CEO of Eviation, a company that is hoping to fly electric planes, smaller planes. So we are very much focussed on technology in respect to aviation.”

In June, Virgin Atlantic placed a $4.1 billion order for 14 A330-900neos, with an additional six as options. The airline says the introduction of the new-generation aircraft will improve the fuel efficiency of Virgin Atlantic’s fleet by 32% over a ten-year period from 2014 to 2024, by which time aircraft in the fleet will have an average age of 5.3 years.

Speaking to Travel Weekly, European vice president, commercial, Juha Jarvinen said: “The main focus for us is to make sure the aircraft we have is the most environmentally-friendly available.

“Airlines’ responsibility is to fly the best technology out there and our investment shows our commitment to that. We will have one of the youngest fleets, and that’s the best thing an airline can do.”

When asked about the impact on the environment of the planned third runway at Heathrow, which Virgin wants to use to grow to be the “UK’s second flag carrier”, he said more aircraft in the sky would reduce congestion and “unnecessary holding” of aircraft over London.”

Expansion at Heathrow, he added, was crucial to boost Britain’s economy and global connectivity, “especially after Brexit”.

When asked about Brexit, Sir Richard said: “It’s the saddest thing that’s happened to our country, and to Europe, since the Second World War and it’s done enormous damage to companies, to jobs, to the money people have in their pockets”.

He predicted that, if a second referendum where to be held, Britain would vote to Remain. “If you look at all the polls it looks like people realise they were misled and they would vote conclusively to stay in Europe, and I would certainly recommend that that’s what they should vote. If that happened we would see the pound roaring back up, we would see trade starting to come back to the levels it was before the last referendum and it would be happier days all-round.”