Get under the skin of local culture and classic sights on a female-focused tour through Jordan, writes Katie McGonagle.

The workshop is abuzz with the clatter of looms and the chatter of women as they work, fingers flying across the threads, deftly interlacing each strand of black and white wool then setting the row in place with a clank of the loom.

Surrounded by baskets filled with threads, sunlight streaming in through the wide windows, this handful of hijab-wearing women are busy transforming simple strands of yarn into a flawless, tightly woven rug inspired by the designs of their Bedouin forebears.

One of the weavers, Amal Ajaleen, smiles shyly and tells us through a translator how proud she is to be bringing this traditional craft to a new generation. But this is more than just breathing new energy into old ways of life.

“This handful of hijab-wearing women are busy transforming simple strands of yarn into a flawless, tightly woven rug inspired by the designs of their Bedouin forebears.”

The Bani Hamida Weaving Centre, set in the small Jordanian village of Mukawir, half an hour from the shores of the Dead Sea, isn’t just reviving the customs of a once-nomadic Bedouin tribe. It was established in 1985 as a way to offer work to local women and has gone on to employ hundreds since, not only in weaving but also marketing, design and accounts, providing a sustainable source of income in a remote rural area and generating enough money to educate the children of the village – girls as well as boys.

It’s one of the female-focused highlights of Intrepid Travel’s Jordan: Women’s Expedition, part of the operator’s range of women-only tours. I’ll confess to feeling a bit sceptical beforehand – was it right to have a departure designed specifically for female travellers, and what could it reveal that a regular itinerary wouldn’t? Yet after eight days in the company of some extraordinarily interesting women – fellow travellers and locals alike – I realised the itinerary is only half the story. 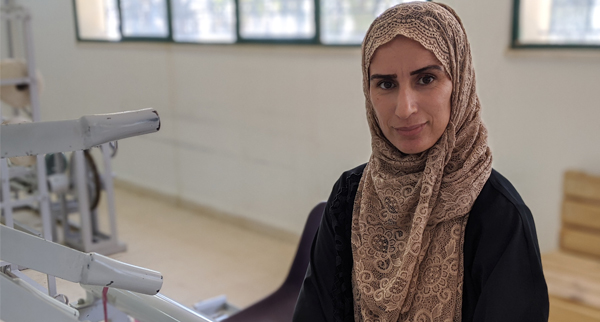 As we sat down together at the welcome meeting in our simple city hotel in central Amman, I looked around the table at the sea of faces and wondered what had prompted each of them to book a women’s expedition over other types of tour.

We were quite a collection of ages and ethnicities, hailing from Australia, Canada, the US and the UK. There were thirtysomething solo travellers taking career breaks, others on holiday while their husbands stayed at home, and a mother-and-daughter duo who regularly travel the world together.

“The itinerary takes in Jordan’s capital Amman, the spectacularly well-preserved Roman city of Jerash, the deserts of the Wadi Rum and the salt-rich waters of the Dead Sea.”

Led by guide Nuwar Jodeh, only the third woman to qualify as a guide in her native Jordan, where she has been leading tours since 1993, the itinerary takes in Jordan’s classic sights: capital Amman, the spectacularly well-preserved Roman city of Jerash, the deserts of the Wadi Rum and the salt-rich waters of the Dead Sea. 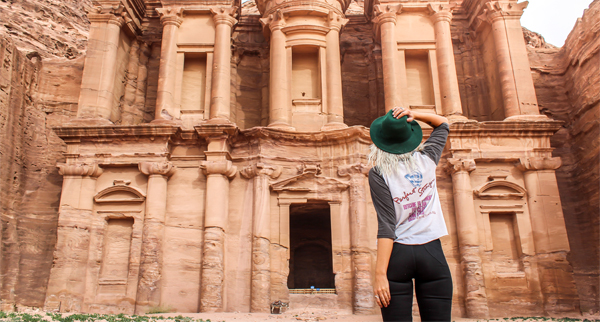 But the most memorable moments of this tour lie in between the big-ticket sights. With two days to explore the Nabataean ruins of Petra – a sprawling site with plenty to see beyond its famous Treasury – we sit down one morning to an alfresco breakfast with a shepherding family. While some of the group take turns at milking the truculent goats (rather them than me), we chat thanks to the help of an interpreter with shepherdess Umm-Qasem, who tells us why she and her family decided to give up their Bedouin ancestors’ nomadic lifestyle and instead settle here, high in the hills overlooking the ancient site.

“With two days to explore the Nabataean ruins of Petra, we sit down one morning to an alfresco breakfast with a shepherding family. “

After climbing the towering steps of Amman’s huge Roman theatre, we rest our legs in the cramped living room of matchmaker Umm-Sultan, sipping overly sweet tea as she regales us in a cigarette-husky voice with tales of the young couples she has set up over the years, railing against the arrival of dating apps and dishing the dirt on the scandalous matches that didn’t work out. 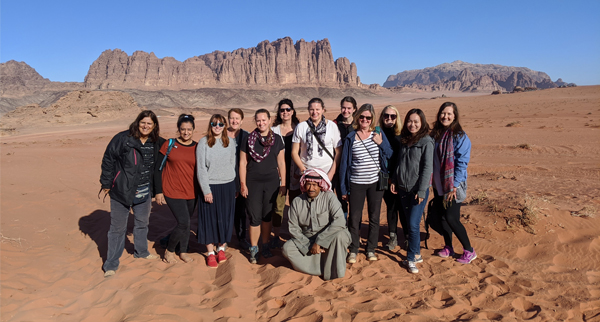 Weaving in these experiences isn’t just about exploring women’s culture, it’s a window on everyday life for ordinary people across the country. We share an enormous platter of Jordanian rice-and-chicken dish maqlaba in another family home where, without the presence of men in the group, our host, Fatima, and her sisters can take off their headscarves as they talk to us openly about life in Jordan while their young children scamper in and out to peek shyly at their visitors.

“Weaving in these experiences isn’t just about exploring women’s culture, it’s a window on everyday life for ordinary people across the country. “

It gives rise to funny moments too: during a four‑hour uphill hike to visit the Monastery at Petra, the conversation turns to the importance of pelvic floor exercises; and while swapping stories of bad dates over after-dinner drinks by the Dead Sea, we set up a Tinder profile for one of our group to get back on the dating scene.

Having set off as a disparate group of women from around the world, sharing stories with each other and with the people we meet along the way – be it over a cooking class or in between vigorous scrubs in a hammam – it turns out getting a window on women’s culture is as much about who you travel with as what you see. 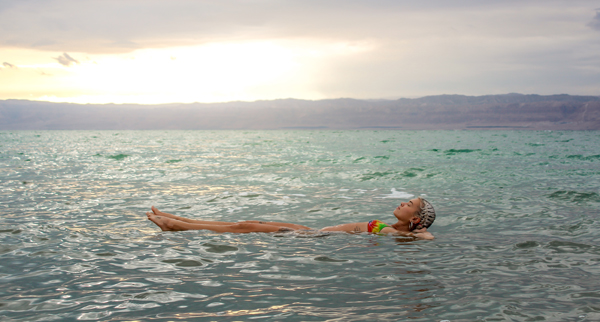 Dead Sea: You can’t come to Jordan and miss out on slathering yourself with dark, gloopy mud from the Dead Sea before washing it off in the salty waters. It’s guaranteed to feel far more authentic than any spa experience, and you can follow it up with the strange sensation of floating without having to tread water.

“Desert camps can be a tad touristy, but its worth the overnight stay for the chance to wake up and watch the sun slowly warm the rust-coloured surroundings.”

Wadi Rum: Stepping onto the shifting sands of Wadi Rum, with it’s Mars-like landscapes and twisted red-rock formations, feels like entering another world. Its desert camps can be a tad touristy, but its worth the overnight stay for the chance to wake up and watch the sun slowly warm the rust-coloured surroundings.

Jerash: This once-thriving Roman city is Jordan’s Pompeii, with near-perfectly preserved ruins including the grand Hadrian’s Arch, two theatres, temples dedicated to Artemis and Zeus and a long cardo, or colonnade, of shops. Allow at least half a day and wear walking shoes to fully explore this magnificent site.

Intrepid Travel’s eight-day Jordan: Women’s Expedition starts at £1,575 for a September 20 departure including accommodation, transport, selected meals and activities, but excluding international flights. Women-only tours are also running in Morocco and Turkey in 2021, along with private options in Nepal and Kenya, but the range is due to be expanded further in 2022.
Intrepidtravel.com/UK 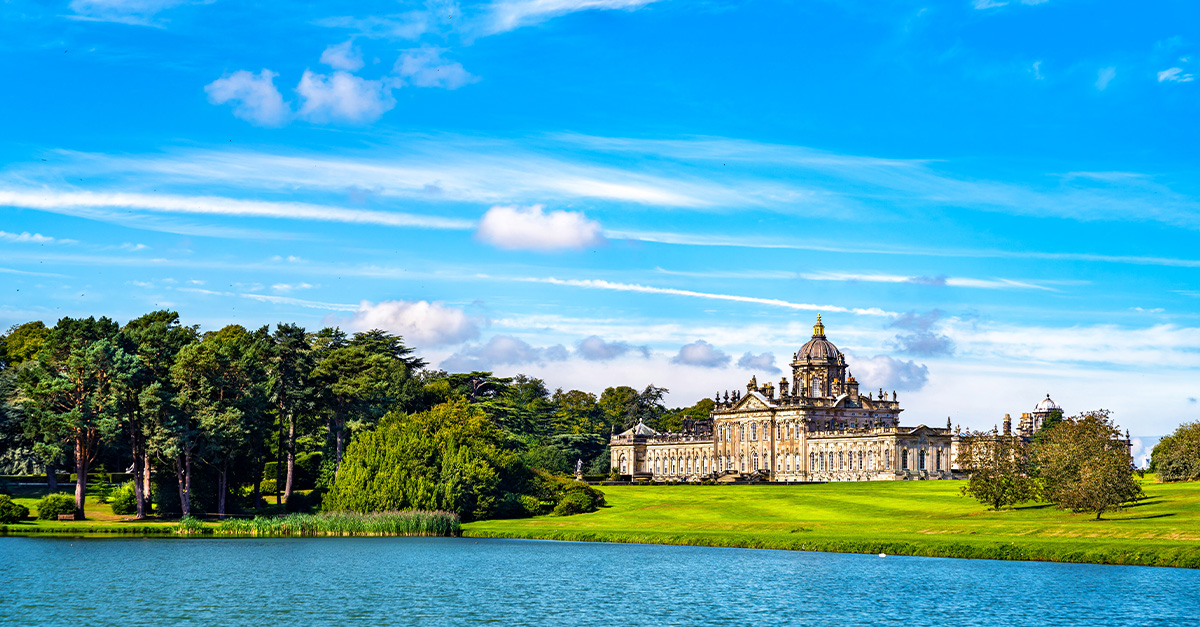