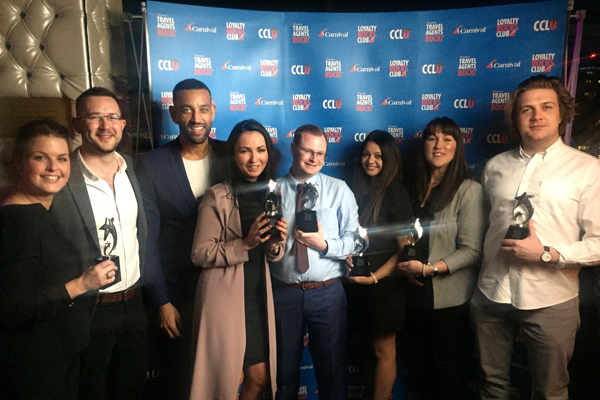 See pictures from the awards here

The awards were hosted by newly appointed head of sales Luke Smith and cruise director Matt Mitchum, fresh from his first 2017 season on Carnival Vista out of Miami, in Birmingham on Tuesday night.

Virgin Holidays Cruises won three of the eight awards at the first event in Birmingham, while Virgin’s Eshaa Patel and Andrew McKenna from Book In Style were named as the top-booking agents.

Thomas Cook, USAirtours and Ocean Holidays were also among the winners on the night.

The awards were the first of four to be held throughout the year around the country.

The Travel Agents Rock campaign features the Loyalty Rocks Club rewards scheme, an online training programme and a trip to Ibiza for the top-selling agents during the wave period.

Iain Baillie, Carnival’s vice‑president for UK and international sales, said: “Since launching our Loyalty Rocks Club in December, agent engagement has surpassed our expectations and we are delighted that we have found another way to continue to reward our valued partners.

“Our initiatives are designed to engage, educate and excite the trade, and agent feedback has been extremely encouraging.”

The cruise line will host agents at exclusive events including a day at the races.

Baillie revealed the line would also host 50 agents at the Clia Conference in May, at which chief executive Christine Duffy will speak.

Agents who make the most bookings with the cruise line in May will win one of 25 places to attend Royal Ascot, while each booking made with the Loyalty Rocks Club will give agents £15.

Throughout the year Carnival  will also be holding brand marketing training days across the UK, with the first scheduled for May in London, followed by another in Manchester.

See pictures from the awards here