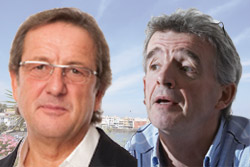 Thomas Cook has warned it could cut capacity to the Canary Islands in response to the Spanish government and local authorities paying what it claims are “unfair subsidies” to Ryanair.

The no-frills carrier will fly from nine UK airports to four Canary Island destinations this summer, supported by what Ryanair refers to as airport operator “discounts”.

But Thomas Cook has claimed this means Ryanair, in effect, receives a subsidy of at least €6.50 per passenger, helping it take market share from charter carriers.

The payments were originally agreed for new capacity and flights on non-peak days when charters seldom fly.

Charter operators said they were assured the payments would end this year, but recently learned of an extension.

Thomas Cook chief executive Manny Fontenla-Novoa told Travel Weekly: “It’s appalling. I’m shocked, disappointed and feel let down. We were guaranteed the ‘subsidies’ Ryanair was given were for a year only.”

Ryanair welcomed the “discounts” in December when announcing new routes to Lanzarote, Gran Canaria and Tenerife “after the local government confirmed its airport discount scheme would run until at least March 2012”.

It also revealed a return to Fuerteventura under a “route development discount scheme”.

Cook said the subsidies were provided by Spanish airports authority AENA following a decree by the Spanish government, which responded to pressure from the Canary Island authorities.

Fontenla-Novoa said paying Ryanair to fly to the islands was not the solution to dwindling arrival numbers.

“The local government tries to justify these ‘subsidies’ by saying it needs more passengers, particularly to north Tenerife,” he said. “But it is kidding itself if it thinks Ryanair is going to solve the Canaries’ tourism problems.”

Fontenla-Novoa warned the operator could move capacity to Turkey and Egypt. “The Spanish government is in danger of losing the most loyal partners it has ever had. We have to digest what the government has done and establish whether it’s legal. I care about Spain –  I am from Spain – but we have other choices.”

A Ryanair spokesman denied the carrier received subsidies and said no such allegations had ever been substantiated in court.

“Instead of complaining, Thomas Cook should apply for the Canary Island discount scheme, lower its fares and compete on price, something it has never had to do in the Canary Islands,” he said.