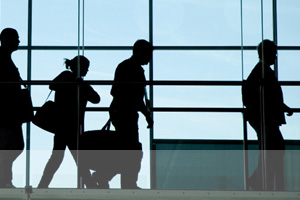 Manchester has been voted the best UK airport in a poll of travellers by travel search site Skyscanner.

Gatwick came in second, followed by Newcastle and Birmingham in the study of 1,600 UK travellers.

Manchester airport was voted as having the best customer service, facilities and shopping as well as the best bars and restaurants. Passengers also commended it for being well organised, passenger friendly and for its accessibility.

Gatwick was praised for its staff and large check-in areas while Newcastle was seen to be the easiest airport to travel through. Passengers commented on its simple layout and good choice of food and drink options.

While Heathrow was named fifth overall, the three other main airports in the London area did not fare as well, with Luton, London City and Stansted all named in the bottom five.

Passengers of London City commented on its expensive parking, whilst Stansted was criticised for its extremely long queues at check-in.

Aberdeen airport, which handles more than 3 million passengers a year took the bottom spot and was given the thumbs down for its facilities including comments from passengers that its baggage carousel area is in need of updating.

Skyscanner’s Victoria Bailie said: “The UK’s leading airports handle millions of passengers every year and the results of our study shows that whilst Manchester is the third busiest in the UK, it still manages to keep passengers happy.

“Many of the UK’s busiest airports including Gatwick and Heathrow performed very well in our study, particularly Heathrow which topped the transport poll. Whilst the airport serves the busiest city in the UK, Heathrow offers passengers a variety of means to get to and from the airport to suit a range of budgets and if time is tight, passengers can travel to the airport from the central London in just 15 minutes.”

How passengers ranked the UK’s airports: