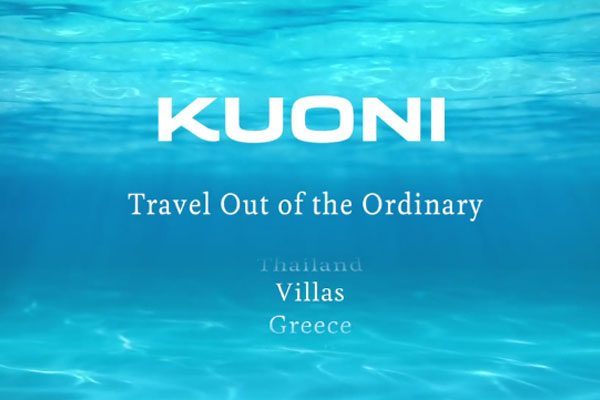 Kuoni’s turn-of-year TV advertising campaign has been designed to show that the luxury travel company does “more than the Maldives”.

It features a woman swimming with pink flamingos and golden dragons and diving through a wheel of fish in a turquoise ocean.

She travels to a European piazza, the plains of Africa, Asian temples and past a cruise ship in a bubble.

It follows on from the advert Kuoni used in the last two years, of a woman walking on water, starting with the same shot of a tropical island the last ad ends on.

Marketing director Dean Harvey said: “One of the things we’ve been known for is our Indian Ocean offering. We’ve increased the range of product and we want people to go on holiday with us more frequently.

“We are more than the Maldives, and we want people to be surprised.”

Brighton-based agency Designate and director Luke Losey used digital manipulation of photographs for the backdrop, and say it could be the first time the technique – which transforms 2D to 3D – has been used in a mainstream television advert.

“We’ve created something quite unusual and surreal, inspired by a magical world of make believe blended with beautiful backdrops from a whole range of destinations,” added Harvey

The advert will be played on mainstream television channels from Christmas Day, and at Kuoni’s 47 stores including John Lewis concessions as well as its 10 partner stores.

Harvey said agents who sell Kuoni can speak to the firm about using the advert to showcase its product.

Independent agents are being given an incentive in January of up to £50 cash per booking or up to £100 in Kuoni discount vouchers.

“We’re aiming to do two things with this incentive – help agents fulfil their travel ambitions and encourage them to travel with us so we can demonstrate the quality of our holidays,” added Harvey.

Extra staff are being brought in to handle calls for Kuoni in January.

Derek Jones, Kuoni managing director, added: “January remains the most important sales period of the year for travel and we want to heighten awareness of our brand and clearly showcase our range of holidays around the world, including cultural tours, cruises, safaris and European collection, so people associate us with quality and range.”