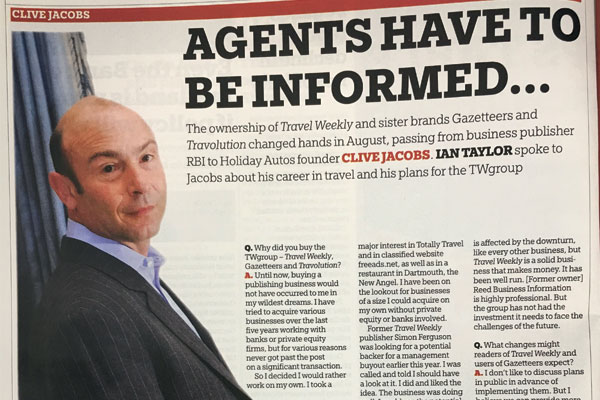 • Clive Jacobs was interviewed by Travel Weekly’s Ian Taylor for the first time since taking ownership of the then TWgroup. Jacobs, founder of Holiday Autos, said business publishing had a strong future but stressed the need for the right business model and a focused, driven team. He predicted a significant proportion of consumers would become increasingly environmentally conscious, and forecast the trade would need to take the domestic market more seriously.

• Two reports revealed more than a quarter of all operators ran at a loss. Travel analyst Plimsoll said 283 out of 1,000 operators made a loss, while 234 agencies out of 814 also ran at a loss. 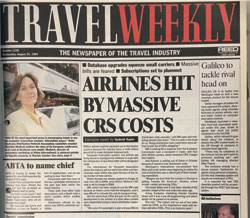 • Angry agents claimed they had not been offered an extra penny by First Choice, the former Owners Abroad, despite a claim by its chief executive Francis Baron that every agent would be paid more for supporting the operator in the six weeks following its planned launch in summer 1995.

• In an exclusive, Travel Weekly warned that small airlines could be squeezed out of distribution systems because of a multimillion-pound bill to introduce three‑letter airline codes.

• Thomas Cook’s Peter Shanks defended its decision to offer all-inclusives in Spain for 1995, saying: “All-inclusives are the way the market will go.”

• On the letters page, agents moaned about the scramble by operators to launch summer brochures first. CS Randell, of CSR Travel in Birmingham, compared the battle to “small boys in a school playground squabbling over a bag of marbles”. 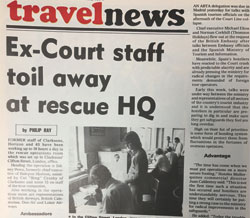 • Travel News analysed the collapse of Court Line, reporting that last-ditch talks to avert a winding down of the travel company and its brands ended at 6pm on August 15. Around 50,000 customers – 40,000 booked with Clarksons and 10,000 with Horizon and 4S – were affected. Court Line directors blamed last year’s oil crisis and economic difficulties for its failure.

• Staff, including former Halcyon Horizon chief executive Sydney Perez, toiled away at a ‘rescue’ HQ in London to repatriate customers and an Abta delegation was sent to Spain to talk to tourism officials and hoteliers affected by the collapse.

• It was also reported that before Court Line’s collapse, talks had already begun between Abta and the Department of Trade to introduce a “topping up” fund, through a per‑passenger levy, to strengthen Abta’s bonding arrangements.