Laura French finds out first-hand why little-known La Gomera should be on your radar.

There are certain parts of the world that words and photos can’t quite do justice. The tiny, volcanic and barely known Canary island of La Gomera is one of those places, with scenes so dramatic they make Jurassic Park look dull.

In the north, fluorescent green slopes plunge into winding valleys, dotted with villages, vineyards and farmhouses.

In the south, red, desert-like rocks tower over giant cacti and black-sand beaches, so that it looks like some strange amalgamation of the arid American wild west and the lush Austrian Tyrol.

“The volcanic island is a place that words can’t do justice, with scenes so dramatic they make Jurassic Park look dull.”

It’s about as far from the brash streets and bright lights of south Tenerife as you can possibly imagine, despite the fact it’s only a 50-minute ferry ride away (Fred Olsen operates six ferry crossings a day, connecting visitors to Tenerife South airport from €34 for adults each way). There are no high-rise hotels and tourists are few and far between.

Pleasant year-round temperatures – lows of 18C in winter and highs of 24C in summer – make it a haven for winter-sun breaks, while 375 miles of footpaths, fervently guarded traditions and one of the highest levels of biodiversity in Europe make the island a magnet for hikers, culture seekers and nature lovers alike.

Our trip began in the island’s capital, San Sebastian, the docking point for ferries from Tenerife and a haven for history fans thanks to a cluster of monuments, including the 15th-century Torre del Conde tower, which was built by the Spanish to defend against indigenous attacks and is the Canaries’ only fortification.

The town’s real draw, though, is the fact it was the last place Columbus came before his grand voyage to the Americas in 1492 – he’s even said to have recruited sailors from the island, collecting water that was then used to consecrate natives – and visitors can see the house in which he lived, alongside the church he frequented. It’s relatively small and certainly quiet, but it makes a good stopover to break up a long journey or, if clients are hiring a car, a suitable spot from which to explore the rest of the island. 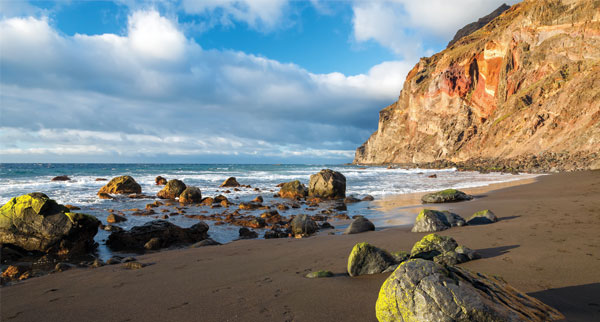 The most popular base, though, is Valle Gran Rey, a coastal resort and once tiny fishing village on the island’s western side. A handful of small cafes and restaurants serving fresh catches wrap around a black-sand bay, and there’s a distinctly laid-back, hippy feel that dates back to the 1960s, when bohemian Americans set up home on the beach. Today, it’s felt via tanned yogis stretching out when the sun rises and dreadlocked bongo players crowding round when it sets.

Despite its popularity with the German market, it still feels pleasingly secret and happily serene – to the extent that when I wandered along to Playa del Inglés, 15 minutes around the corner, I had calming views over the glistening, sun-drenched sea almost entirely to myself. 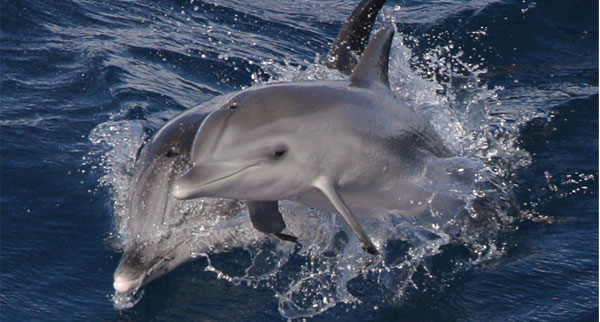 The highlight was a dolphin and whale-watching trip out from the harbour. Thanks to a certain breed of dolphins that live here permanently, visitors are almost guaranteed a sighting – and we weren’t let down. Within half an hour, there was a horde of the marine creatures diving in and out of the water right next to the boat, and 10 minutes later, we were witnessing huge pilot whales up so close and personal that we could hear them breathing in and out like old men snoring (from €35 for a three-and-a-half-hour trip with Excursions Tina, including tapas and sangria).

The island’s tour de force, though, is Garajonay, a Unesco World Heritage Site and sprawling expanse of walking trails, mountains and sub-tropical laurel forest that makes up 35% of the island. Mists from the Atlantic create a lush layer of green, with mosses, ferns and lichens covering twisted trees, so that it all looks distinctly Avatar-like. 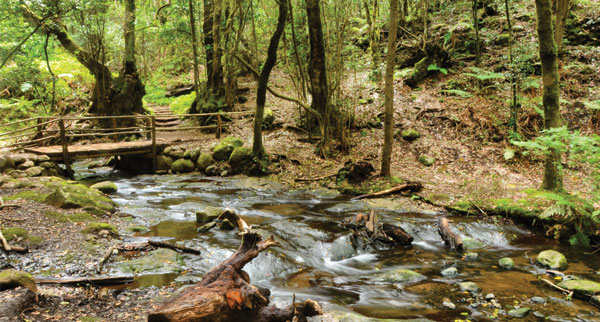 It gets a big tick for wildlife lovers, with half of the park’s species endemic to the island, and it’s scattered with jaw-dropping viewpoints that can be explored on foot or by vehicle.

My favourite was Risquillos de Corgo, just outside the village of Vallehermoso. Picture an endless expanse of soaring mountains and twisting pathways – half lush-green, half arid-amber, dotted with palms and farmhouses, with just a patch of blue ocean in the distance.

What really stands out about La Gomera – and draws cultural travellers as well as active types – is the sheer number of traditions still present. Most notable is Silbo Gomero, an ancient whistling language unique to the island and now recognised as an item of Intangible Cultural Heritage by Unesco.

“Atlantic mists create a lush layer of green, with mosses, ferns and lichens covering twisted trees, so that it looks Avatar-like.”

The language is believed to have originated with the Guanches people, who came from North Africa to inhabit the Canary Islands about 2,000 years ago. It was used to communicate between hills on the more mountainous islands until the mid-1950s and is now kept alive on La Gomera for heritage, culture and tourism purposes – it’s taken so seriously, it’s even obligatory in schools.

Clients can witness it first-hand at the Mirador del Abrante restaurant, where waiters whistle to each other in piercing, bird-like sounds and food is served against a backdrop of the eye-popping blue ocean, Mount Teide rising up in the distance from a puff of cloud. 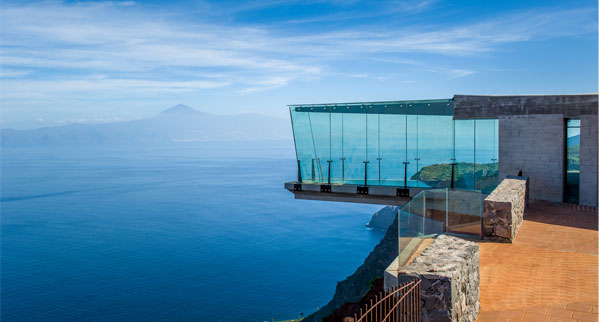 Beyond the whistling, La Gomera maintains a host of other traditions, not least a long-standing pottery heritage still evident in El Cercado, a small village in the west where three potters live and work. Visitors can watch demonstrations or try it out first-hand at Maria del Mar’s shop, where the craft has been passed down through more than four generations using the traditional Canarian (and North African) method, without a wheel.

Several other villages offer their own unique traditions, including the tiny hillside settlement of Vallehermoso, on the western side, and Hermigua and Agulo, in the north.

“Silbo Gomera, an ancient whistling language unique to the island, is taken so seriously it’s even obligatory in schools.”

Most memorable was discovering an old biscuit shop in Garajonay, passed down through the owner’s ancestors, where we were welcomed in as if one of the family with curry-flavoured cookies and other unusual treats, still made as they always had been. 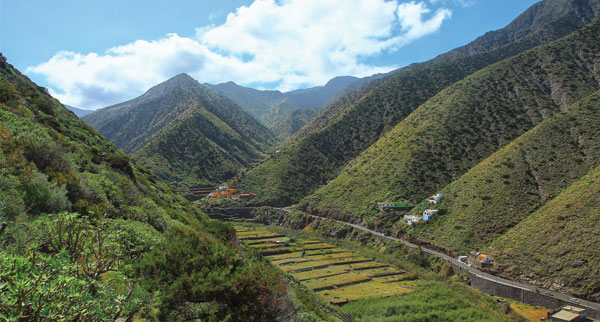 It seemed to sum up the sense of warmth and respect for tradition seen across the island, a charm that was almost as powerful as its immense landscapes and rare tranquility.

La Gomera might not be the one for youngsters and party-goers looking for nightlife, but for those wanting a remote, laid-back escape from it all where nature, heritage and history are revered in equal measure, there’s nothing else quite like it.

Inntravel offers a seven-night, self-guided walking holiday on La Gomera from £825. The price includes breakfast and some other meals, plus ferry crossing from Los Cristianos, luggage transfers, maps and notes. Flights are extra.
inntravel.co.uk

Prestige Holidays has a week’s B&B in a standard room at Parador Conde de la Gomera from £873. The price is for a March 7 departure from Gatwick and includes catamaran crossing and transfers.
prestigeholidays.co.uk

Headwater’s guided tour, Walking on La Gomera, is based at the Parador and costs from £1,519 for departures from January 16, 2018, to April 9, 2019. Flights from Gatwick, ferry crossings and hotel transfers can be arranged.
headwater.com

“Despite being the second smallest of the Canary Islands, La Gomera has the highest level of biodiversity in Europe and the last surviving laurel reserve in the world. Here you can go back to life as it used to be: simple and stress-free. We want the kind of tourism that will allow us to keep our traditions and nature by not having international flights, prohibiting the construction of developments that may endanger our island’s nature, and restricting the number of boat expeditions, so as to not harass the sea life. We want La Gomera to be the discerning traveller’s best-kept secret.”