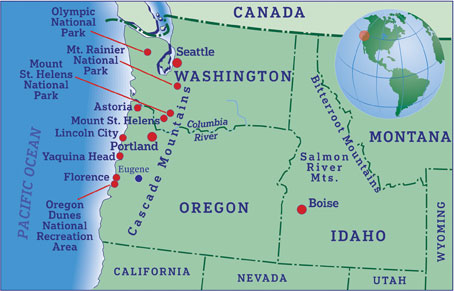 When asked where in the US they’d most like to live, Americans consistently opt for the Pacific Northwest.

The region, comprising Washington State and Oregon, sandwiched between British Columbia in Canada and California to the south, is best loved for its relaxed lifestyle and great outdoors. Compared with California or the East Coast, the Northwest is rich in wide open, empty spaces. Highlights include the Pacific coast beaches, Columbia River Valley, Mount St Helens and Oregon’s Crater Lake.

The two states are divided by the Cascade mountains, with the ocean and green valleys to the east and high desert plateaux to the west. These were the last US territories to be “discovered’ by European settlers. Lewis and Clark’s exploratory expedition reached the Pacific at the mouth of the Columbia River in 1805.

Recommend the Pacific Northwest to clients looking for a laid-back American experience. Seattle and Portland are hip cities, with young populations working in high-tech industries, and enjoying lively music and arts scenes. Beyond the cities, Washington State and Oregon are wonderfully green.

There’s terrific, good-value skiing and snowboarding in the Cascades, hot springs, excellent wineries and tasty, local produce. In fine weather, the beaches are picture perfect and the scenery is some of the most unspoilt in the world.

What to see? Best known as the home of a certain coffee shop chain, the city has cafes galore as well as vibrant cultural and music scenes. Visitors should start at the Seattle Center, a 90-second monorail ride from downtown, where they can find the Space Needle, a children’s museum and the city’s theatre, opera and ballet companies.

On the waterfront there’s the aquarium, home to the giant Pacific octopus, and the Seattle Art Museum. More art can be enjoyed at the Olympic Sculpture Park, which combines works by Richard Serra and Alexander Calder, with views of Puget Sound and the Olympic Mountains.

Located 10 minutes south of the city, the Museum of Flight is a testament to Seattle’s links with the aviation industry. Vintage aircraft, rockets and the original Air Force One are on display.

Shoppers should head for Pacific Place, the REI flagship store, and the new Nordstrom department store. The Seattle Music Map guides music lovers to the site of Nirvana’s first gig, dozens of live venues and the hotel room where the Beatles once fished out of the window.

What to see? Portland is Oregon’s largest city, with distinct neighbourhoods and ever-expanding music and restaurant scenes. The riverside Oregon Museum of Science and Industry is one of America’s finest, with more than 200 hands-on exhibits, an OMNIMAX cinema, a submarine and a planetarium. For something a little less 21st century, the 1914 Pittock Mansion is packed with art and fine antiques.

Many of the city’s highlights are outdoors, such as the Classical Chinese Garden and teahouse in Chinatown and the Japanese Garden in Washington Park. The nearby World Forestry Center Discovery Museum is a special attraction where visitors can learn about forests in the Pacific Northwest.

What to see? The Oregon coast runs south from the Columbia River Estuary and the town of Astoria, from which eco-cruises depart, offering a chance to spot sea lions, seals, cormorants, a bald eagle or great blue heron.

Cascade Head, near Lincoln City, has hiking trails that offer views of the wild coastline – the perfect place to spot whales in springtime. Further south, the road hugs the coast and links spectacular headlands with seaside towns.

Yaquina Head, with its 162-foot clifftop lighthouse is impressive. North of Florence are Sea Lion Caves and to the south of the town is the Oregon Dunes National Recreation Area – 14,000 acres of sand dunes, beaches, campsites and trails.

What to see? The park is located on the Olympic Peninsula, north of Seattle. It is made up of coastline, mountains and rainforest. A network of hiking trails provides access to the rainforest and backpacking is possible along the Pacific beaches. In winter, Hurricane Ridge offers alpine and cross- country skiing.

All you need to know