Broaden your horizons with a fresh look at what North Wales has to offer.

It’s home to sweeping national parks and a 3,500ft mountain, was the inspiration for Lewis Carroll’s Alice in Wonderland, and the first place the newly married Duke and Duchess of Cambridge called home. Its landscapes are dotted with windswept sandy beaches, medieval castles in crumbling ruins, 100-year-old railways snaking across steep green hillsides, and the tiniest cottage in the country – just 10ft tall by 6ft wide.

Anyone who thinks holidays in the UK are, frankly, a bit dull clearly hasn’t spent much time exploring the wilds of North Wales. This region is full of surprises, even for those who think they know it well. And if anyone’s still got lingering memories of childhood holidays spent waiting for the rain to stop or playing in the amusement arcades of Victorian beach towns, there’s definitely a bit of updating to do – though they will still find the longest promenade and oldest Punch and Judy show in the UK here, so it has enough to raise a nostalgic smile.

We find out how to sell this region to any type of traveller, from adventurous types who want to test their mettle on its rugged landscapes, to families looking for a classic British beach break and older clients wanting a trip down memory lane. 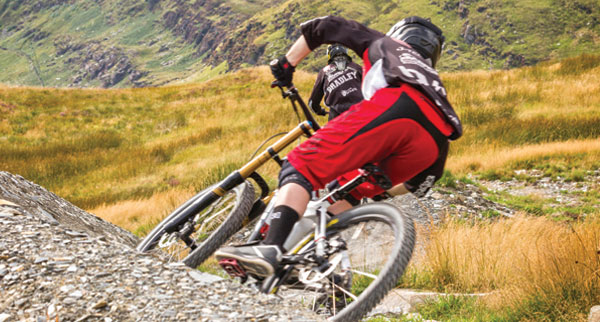 On the surface, North Wales doesn’t have much in common with the beaches of Hawaii or Australia’s Byron Bay, but Surf Snowdonia is changing all that. This artificial lagoon boasts some of the longest man-made waves in the world: from knee-high efforts for beginners up to two-metre-high barrels which give expert surfers 16 seconds of adrenaline. Entry from £15.

It’s not the only daredevil attraction to open North Wales up to those who want their pulses to race a little faster. At Penrhyn Quarry on the outskirts of Snowdonia National Park, Zip World is home to the world’s fastest zip line, Velocity, said to be capable of reaching up to 100mph, along with Europe’s only four-person zip line for families who would rather take the plunge together. A new half-mile toboggan‑style ride, Fforest Coaster, also opens this summer.

If skimming across the treetops doesn’t appeal, try delving deep under the earth at Bounce Below, set in a 176-year-old cavern and former slate mine. Kids big and small can bounce on giant trampolines, crawl through netted tunnels or throw themselves down slides as high as two double-decker buses – and all out of the rain.

The thrills don’t have to come with an entry price, though: one of the biggest attractions of this Welsh region is its natural beauty. Snowdonia National Park is the third-largest park in the UK, with nearly 1,500 miles of public footpaths and nine mountain ranges within its borders.

SuperBreak recommends making a base in Llanberis and having a go at hiking, rock-climbing, archery and fishing from there, or taking it a bit easier by hopping on the Snowdon Mountain Railway – a good way to get active with a family, as the kids’ legs won’t tire halfway up the climb. The three-star Royal Victoria in Llanberis costs from £40 per person per night with SuperBreak.

Kids and teens will also find plenty to spark their sense of adventure at Hoseasons park Brynteg in Anglesey. Still within easy reach of Snowdonia, it’s also got a 20ft climbing wall and adventure play park so little ones can get their fix of outdoor fun, and an extra 16 open-plan units with hot tubs were added earlier this year, so mum and dad will be in their element too. 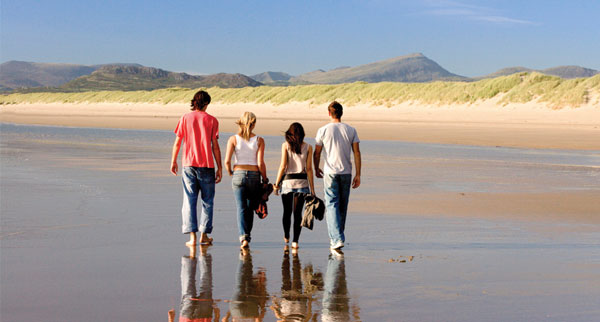 There’s something rather special about a good British beach. The water might be a tad chilly for swimming, and sunbathing weather is far from guaranteed but, on the plus side, there’s no fighting for space to spread out a towel, and no need to worry about bringing the dog.

The pretty Llyn Peninsula boasts 100 miles of coastline, so you’re never far from the sea. The north and west coasts tend to be a bit wilder and more rugged, while the south coast has earned the nickname of the Welsh Riviera (just don’t expect any superyachts and gorgeous French models – this is still Wales, after all).

Haven’s enormous Hafan y Mor Holiday Park is well-placed to make the most of the peninsula’s beaches but still close enough to explore Snowdonia National Park, with glorious views to be enjoyed from its aerial adventure course. It’s also home to a boating lake, extensive gardens, an indoor sports centre ideal for rainy days, and has this year completed a £3 million refurbishment of its indoor pool, adding flumes, slides and a wave machine. The park enjoys direct beach access, and is also a short drive from Pwllheli, Llanbedrog and Black Rock Sand beaches.

On the north coast, Talacre Beach is near Prestatyn, with the Wirral just viewable across the River Dee, and is one of those old-fashioned holiday resorts – expect slot machines, Mr Whippy ice cream vans and fish and chips by the sea. It’s also home to a Hoseasons park that features Go Juniors activities for three to seven-year-olds, plus a new spa offering facials and aromatherapy treatments.

For older clients who are less interested in building sandcastles and more in strolling along the promenade, suggest Llandudno. Established in the mid-19th century during the boom in British seaside resorts, it’s now the largest in Wales and its 700m pier (also the longest in the country) is Grade II listed. But for fans of Lewis Carroll, the real delight might be finding this place was where the author came up with his most famous character, during a seaside stay with the real-life Alice Liddell and her family. There is even an Alice in Wonderland trail set up to follow the white rabbit on a walk around town.

SuperBreak says Llandudno is popular for short breaks year-round, and features 17 hotels in the area including new additions the Grand Hotel and Queens Hotel, both two-star. Shearings also features its own-brand Bay Marine and Bay Country Hotels set near the promenade at Llandudno, while Grand UK Holidays uses the town as a base for most of its holidays in the region, including its new Gems of North Wales tour. The five-day trip includes two full-day excursions – a journey across the Menai Strait to Beaumaris castle in Anglesey, and a day at pretty Portmeirion. 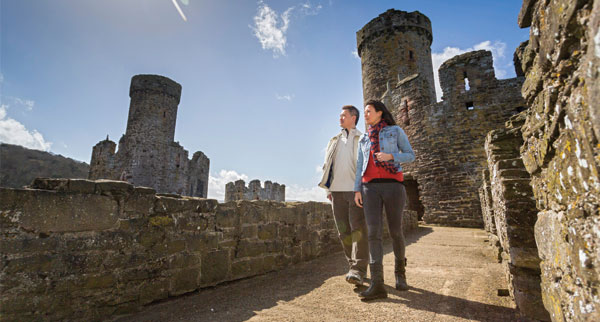 There aren’t many places where you could stumble across the ruins of a medieval castle in the middle of town, but North Wales is one of them. Its ring of 13th and 14th-century fortifications built by British monarch Edward I – made up of Beaumaris, Conwy, Caernarfon and Harlech – is a Unesco-listed World Heritage Site.

Even those who aren’t history fans will find themselves fascinated by the tales hidden behind these ruins of English invaders and Welsh rebels storming the castle walls, and later of the Wars of the Roses and the English Civil War.

The region’s other big hitter comes in the form of its heritage railways, which are a phenomenally popular selling point, especially with older travellers. Many guided tours pair its classic train journeys with castles for a trip that ticks all the boxes.

Great Rail Journeys’ Railways & Castles of Wales does just that, basing guests in Llandudno for a six-day tour which includes the Snowdon Mountain Railway, Welsh Highland Railway and Ffestiniog Railway, plus Conwy Castle and Bodnant Gardens. Louise Heatley, head of product and contracting, says: “Wales is a beautiful part of the UK, especially along the North Wales coast. This tour allows customers to travel on three great rail journeys and explore the impressive castles of the area, while enjoying the breathtaking scenery.

Back-Roads Touring trip The Wonders of Wales also focuses on the cultural side of the country, travelling on a narrow-gauge steam railway, having a go at learning the Welsh language, and listening to a male voice choir in Conwy.

There are plenty of other niche interests to exploit here too, with themed tours such as Shearings’ Gardens of North Wales, which visits beautiful Bodnant Gardens and the Italian-style village of Portmeirion; and Grand UK’s Giants of North Wales, which takes a boat trip over the feat of 19th-century engineering that is Pontcysyllte Aqueduct.

Beach: SuperBreak offers a two-night break with breakfast and dinner at the two-star Grand Hotel in Llandudno from £95.
superbreak.com/agents

This hotel is a tasteful blend of old and new. The approach is beautiful: you go through a castle arch to get to the check-in area, which gives it a wow factor. There’s also a glass atrium attached to the old building so it has an incredible feeling of space, and if it’s a clear night, you can see the stars.

The signature rooms are particularly spacious, overlooking the garden, with its pond and fountain, and in a separate area from the rest of the hotel. They would be great for guests marking something special like a birthday or anniversary.

The dining is very impressive – there’s a carvery or à la carte menu, and a traditional cooked breakfast. There’s also entertainment on some nights, which is nice to dip in and out of as you see fit.

But the biggest attraction here is the location: the grounds are enormous
and in the most gorgeous setting, and if you get good weather, it’s a brilliant base from which to explore Portmeirion or Chester, or go on the Ffestiniog Railway to see how beautiful North Wales can be.

Book it: Three nights in a standard room with a Simply Dine package (breakfast and three-course evening meals) starts at £269, based on two sharing, for arrivals on June 23.
warnerleisurehotels.co.uk