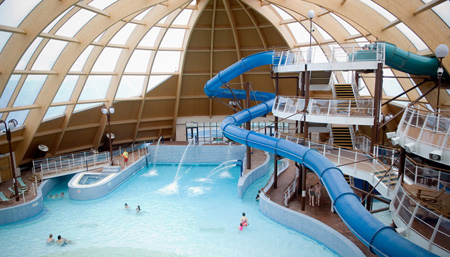 With an unfavourable euro-pound exchange rate and a turbulent economy to contend with, it’s no surprise that increasing numbers of British families are opting to holiday in the UK.

Recent research by VisitBritain shows that five million Brits who holidayed abroad last year would consider holidaying in the UK in 2009.

VisitBritain deputy chief executive Sandie Dawe said: “Many overseas destinations that have been popular with Brits have an increased price tag this year, so 2009 could see a lift in UK domestic holidays with more of us finding the grass is greener in our own backyard.”

Superbreak has seen a rise in bookings from agents for UK hotel breaks. In March, bookings for London were up 34%, while bookings for provincial locations had risen by 11%. Sales director Ian Mounser said: “Some of this is undoubtedly influenced by the exchange rate, but also because domestic breaks are an easy thing to book at the last minute.

“We are likely to have access to excellent availability during the spring and summer, so prospects for further growth are good.”

Here are our suggestions for five of the best family holidays in the UK.

Who would it suit? Active families

Why? Set amid 500 acres of verdant rolling countryside within the Pembrokeshire Coast National Park, Bluestone is a holiday village consisting of 182 timber self-catering lodges.

Guests have exclusive use of on-site facilities, which include restaurants, a pub, a wine bar, shops and a holistic spa. Activities include orienteering, archery and laser clay shooting.

Children under 12 can take to the wheel in their first off-road safari, while kids under six can go on a teddy bears picnic.

Sample product: Superbreak offers three nights in a self-catering lodge at Bluestone, Wales, for £465 for a family of four, arriving on a Friday from July 24 until the end of August. (0871 222 3055)

Who would it suit? Beach lovers

Why? Jersey is a firm favourite with families thanks to its great climate and clean, safe beaches. Jersey’s Merton Hotel is ideal for a family break as it has a leisure complex with a new £1 million attraction, the Flowrider surfing wave, which enables children to catch a wave in a safe environment.

During the summer holidays, there is an evening kids’ club for children aged from four to 12, as well as a dedicated group for teenagers, leaving adults free to dine out at Jersey’s chic restaurants. Families can also hire bicycles and explore the island through a network of picturesque trails.

Who would it suit? Families who don’t take themselves too seriously.

Why? Butlins has long shed its uncool image, offering families a wealth of activities to keep them busy and entertained at its three resorts in Bognor Regis, Minehead and Skegness.

The entire family can learn how to be cheerleaders, while the children can master juggling, spinning plates and stilt walking at a dedicated circus school.

At Butlins Bognor Regis, kids can follow in the footsteps of Britney Spears or Robbie Williams by recording their own CD or DVD with professional equipment and backing music. Guests can enjoy more than 50 free activities including 10-pin bowling, bingo, go-karting and laser-quest.

Sample product: Bourne Leisure Sales offers a four-night break at any Butlins resort from £60 per person, based on four sharing a silver self-catering apartment on selected midweek breaks. (0845 070 4742, bourneleisuresales.co.uk)

Who would it suit? Families who want to go back-to-nature

Why? Glide along the tranquil River Wey, in the heart of beautiful Surrey, on a traditional canal boat.

The week-long trip begins in bustling Guildford. You then cruise the length of the river, passing through quaint villages such as Ripley and Weybridge. Follow the River Thames to Windsor or Hampton Court where you can moor your canal boat and explore the Palace’s famous maze, a fun adventure for kids.

You can even stop near Thorpe Park for an adrenalin-filled afternoon. Legoland is also en-route with its promise of exciting rides and attractions.

Who would it suit? Families who like to hang out on the beach and in the swimming pool

Why? Haven has plunged millions of pounds into revamping its 35 caravan parks across the UK, all of which enjoy coastal locations.

The investment has focused on the introduction of spectacular water facilities and activities. New water features include turbo paddlers, which stir up a storm in the pool, and water walkerz, which allow kids to ‘walk’ around the pool in big clear globes.

Anyone who wants an underwater adventure can take scuba diving lessons as qualified instructors are on-hand to teach beginners. Play It’s a Knockout, a pool-based activity where families are given wacky tasks to complete.

Sample product: Bourne Leisure Sales offers a three-night break for the family from £99, based on a superior two-bedroom caravan. (0871 230 1919, bourneleisuresales.co.uk)