City breaks with kids are tough enough, but an Interrail adventure with two children aged five and two? Supermum Cathy Toogood sets out to prove it can be done.

I grit my teeth as we walk through Venice at 5.30am during a thunderstorm. I have a large two-year-old on my front in a sling, and an even larger backpack on my back, and I’m silently cursing our decision to get the 6.41am train to Ljubljana, via Trieste.

But then my five-year-old pipes up from underneath her umbrella: “Mummy, we’re the only ones here. It’s brilliant.” And I realise that it is. Walking through such a popular city with no one else around feels special. Gondolas are sleepily moored up, the only disturbance to the tranquil canals is the splash of huge raindrops, and my son gets the window seat he’s coveted for the past two days on our vaporetto (water bus) to the station.

Unlike my teenage Interrail jaunt, this three-week trip, with my two-year-old son Zac and five-year-old daughter May in tow, was carefully planned. Family city breaks may initially feel like hard work, but our stay in Venice proved to be one of the successes of the trip. Despite having visited before, stepping out of Venezia Santa Lucia station in dazzling sunshine, I discovered all over again – through two sets of fresh eyes – how incredible the city is. 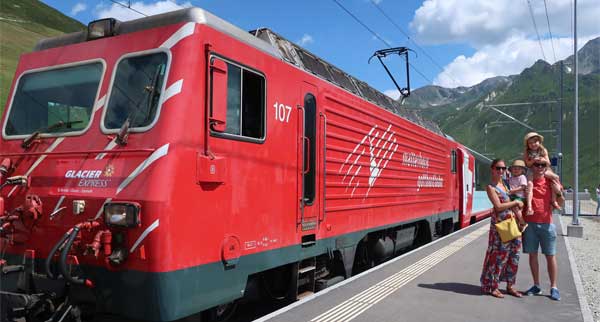 “Are there sharks here?”, Zac asked incredulously while we explained that people travelled on the water. “Look, the police!” May cried as a patrol boat zipped by. And their excitement about seeing something new every day didn’t dampen, whether watching a parcel being delivered by boat or wondering how gondoliers squeezed all that elaborate velvet furniture onto their vessels.

Roaming the backstreets proved equally exciting, as May discovered shops filled with colourful Murano glass figurines and glittering masks, and we debated how long it took to carve intricate church facades.

Then the rain hit, and the city took on a new identity. Eating cicchetti (tapas) during a lightning storm, both children were so busy watching tourists in ponchos scurry by that they gobbled down everything, vegetables and all.

“When we come next summer, mummy, bring my wellies,” Zac instructed me with a mouth full of spicy sausage. “Then I can run around like everyone else.”