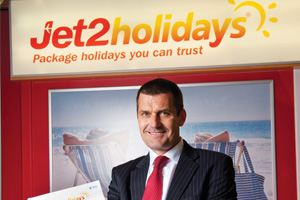 Steve Heapy has been promoted to chief executive of Jet2.com and Jet2holidays.

Company founder Philip Meeson has become executive chairman as a result of the change.

Heapy has been managing director and chief commercial officer since joining the company in 2009. Previously he worked in senior and director roles at MyTravel, Thomas Cook and Libra Holidays.

He said: “2013 is set to be another significant year of growth as we build on the success of last year. We are going to have some exciting things planned for 2013.”

Budget carrier Jet2.com increased capacity overall by 10% year on year for summer 2012. In May it announced plans for eight new routes out of East Midlands following British Airways’ announcement it was closing Bmibaby and its base at the airport. New routes included Chambery and Geneva for winter 2012-2013 and Dubrovnik, Menorca, Nice, Ibiza, Larnaca and Gran Canaria for summer 2013.

In a trading statement issued by parent company Dart Group last year, the operator was reported to have handled 312,000 holidaymakers in the six months to September, up by 97% from 158,000 in the same period in 2011. Jet2.com saw carryings rise by 14% in the six months to 3.6 million passengers, with increases in yields and load factors.

Last month the tour operator launched a stand-alone ‘All-Inclusive’ brochure alongside expanded ‘Beach Holidays’ and ‘Families’ programmes for 2013 following increased demand. It brings the total number of dedicated brochures to five, inlcuding ‘Cities’ and ‘Indulgent Escapes’. For summer 2013, 47% of sales are for all-inclusive holidays, up from 37% of all summer 2012 holidays.

General manager Alan Cross said the operator planned to contract more of its own product in the near future. Already more than 1,900 properties are contracted by its own staff. In-resort, the operator is introducing Jet2holidays-branded transfer coaches.

The operator is also planning to work with more independent agents’ websites in future by providing links into its booking system.