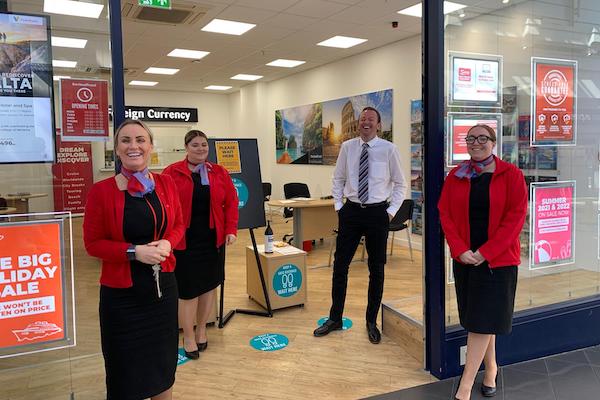 Agencies reported a positive first day back as non-essential shops reopened in England and Wales on Monday – with queues outside some branches.

Eight Barrhead Travel stores in England opened, with Scottish branches to follow at the end of April, including in Birkenhead (pictured).

Strategic business director Nicki Tempest-Mitchell said: “The towns feel busy. The nervousness has gone; it’s elation and agents are happy to be back with colleagues.

“People are happy to see the businesses back up and running again.”

Paul Waters, retail director at 24-branch Premier Travel, said: “There is an air of positivity. It’s a massive positive for staff. In one branch, they were brought prosecco as a thank you.”

Paul Hardwick, head of commercial at Fred Olsen Travel, said “it was quite positive” at the agency’s 14 branches “but bookings were not massively up”.

“Lots of customers came to say hello and a couple of branches had people queueing to get in,” he said, noting that the Bury St Edmunds branch made three P&O Cruises bookings in the morning with clients who prefer to book face-to-face.

Agents reported most bookings were for 2022, or rebooks, and customers asking about testing and the new traffic light system.

She said most clients are 60-plus, noting: “The consensus was they were only looking at travelling in the UK and Channel Islands this year, but are happy to consider travelling abroad in 2022.

“For us as staff, we were just delighted to be able to open the doors and greet our customers again and look forward to a much brighter future.”

Manager Gill Blundell said there was a queue outside Worldchoice Travel, Wigan. Six bookings were confirmed on Monday, and a further three on Tuesday morning. “It’s manic, like a peaks,” she said.

“Some who moved coach holidays to next year now want to go this year as they’ve been vaccinated. They’re desperate to get away.”

She predicted: “Once we get clarity on the travel rules, we will go through the roof with late bookings.”

“There was lots of footfall,” he said. “Regular customers brought us chocolates and biscuits.

“It feels like we were missed – and we missed our customers.

He said clients are “more philosophical than last year” and many are determined to travel this summer.

“We expected worried customers but it was the polar opposite – it felt like a sale day.”

They have a locked-door policy with appointments for clients, and a large TV screen to share information with clients in a socially distant way.

“There is more confidence for booking later in the year or 2022, and people are asking about testing but there is a lot of positivity,” said Bowers.

However, not all agencies had busy a day on Monday.

Janette Ashby, who took over Global Travel Bamber Bridge in November 2020, said: “It has been a quiet day, no phone calls and only one person has been in for brochures. I had a couple of clients pop in to say welcome back.

“Hopefully trade will soon pick up again once they are all out of the hairdressers, barbers and beer gardens.”

But he added: “We have been here for nearly 50 years and it is nice to engage with people face to face again.

“People can see the lights are on and see us in here, which makes a big difference. It is a small but positive step.”

Adele Croft, branch manager at Colchester Travel in Billericay, was “buzzing” after taking a £104,000 Cunard world cruise booking over the phone.