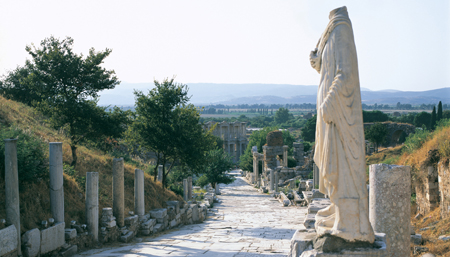 Budget breaks for sun-worshipping party animals – that’s Bodrum, right? Well, its town centre does burst to the seams with brash bars, Brits and bargain stores, so you could be forgiven for pigeonholing the whole area as a no-frills fail safe. But there’s a lot more to the peninsula than that.

And with Pegasus Airlines and easyJet recently launching flights direct from London to this non-euro currency zone, affordable luxury breaks amid quieter spots in the town, and more so around the peninsula, are well within reach for discerning customers who open their eyes to this destination.

In a short uphill stroll through the town’s winding residential streets, visitors will be able to hear the haunting calls to prayer from the town’s mosques, before reaching the Roman amphitheatre and admiring the coastal views.

Elsewhere in town are the remains of the Mausoleum of Mausolos – one of the Seven Wonders of the Ancient World, no less – and St Peter’s Castle, housing the Museum of Underwater Archaeology, is on Bodrum Bay. Private city tours are available.

Outside of town there’s the unspoilt fishing village of Torba, home to the remains of a Byzantine monastery. Ferries take visitors to Didyma and the Temple of Apollo, while the ancient city of Ephesus can be reached in two and a half hours from Bodrum town.

A great way to explore the Bodrum peninsula’s hidden coves is to charter a gulet yacht. Energetic types can windsurf, canoe, catch fish or snorkel off the boat.

Head to Bitez for upmarket water sports clubs. Choices include wakeboarding, parasailing and the sport it is most renowned for – windsurfing. The unspoilt village of the same name, a 15-minute walk inland, offers a break from the beach throng.

Inland, there are jeep safaris, white-water rafting on the Dalaman river and horse riding at Turgutreis Country Ranch or Hayvansaray Horse Riding Centre. There’s also luxury shopping at the Port Bodrum complex on the marina at Yalikavak.

The Bodrum Princess Deluxe resort in Golturkbuku (the new name for merged villages Golkoy and Turkbuktu) is known for its sumptuous spa, as is the nearby Ada Hotel, which houses a high-end hammam. Turgutreis village has the Mandala Spa in the five-star Aegean Dream Resort, while the Rixos Hotel in Torba is another choice.

In Bodrum town, fine dining options are found mainly in upmarket hotels. Examples include the Marmara’s Tuti restaurant, set on a terrace overlooking the marina, the Antique Theatre Hotel’s candlelit poolside and, out of the hotels, Denizhan’s rustic meat feast on the town’s borders.

Meanwhile, the peninsula is peppered with tranquil villages and remote retreats with their own elegant restaurants. Recommend Gusta in Gumusluk, with top chefs from Istanbul; the classy Olives at the Kempinski Hotel Barbaros Bay, and some great seafood restaurants in Ortakent, Torba and Yalikavak.

Elsewhere, glitzy Golturkbuku has been dubbed ‘Turkey’s answer to St Tropez’. It’s a magnet for the rich and famous of Istanbul. For fine dining, suggest Mey or Karaf; for clubbing, Ship Ahoy or Bianca Beach Club.

Although Bodrum town has a sprinkling of high-end venues, the luxury market is more focused elsewhere on the peninsula, where most of the hotels have their own private beaches.

Book clients a flight and stay in one or more of the smaller villages, such as Torba or Yalikavak for tranquillity, or Golturkbuktu for buzz. They can then rent a car and explore the whole area, book a gulet cruise, dine, shop and get pampered in style.

Now a sizeable town measuring about 2¾ miles east to west and 1¼ miles north to south, Bodrum’s development over the last few decades has been strictly controlled; all buildings are now low-rise, white-painted blocks without balconies help achieve a Mediterranean village effect.

The waterfront is the main attraction, stretching out on both sides. To the west is the almost circular, enclosed harbour and marina with its fleet of charter yachts; to the east is a more open bay, with a narrow beach and more boats, plus restaurants built directly above the lapping waves.

The centre comprises a knot of streets and alleyways immediately inland from the striking medieval St Peter’s Castle.

Location: On Turkey’s southwest coast, at the point where the Mediterranean and Aegean Seas meet, 150 miles south of Izmir, 30 miles south west of Bodrum airport, and 135 miles northwest of Dalaman airport.

Position: It’s on the south side of a scenic peninsula, indented with bays and coves.

Sell it to: Enquiring, self-sufficient types who like to poke among ruins and backstreets, or those who would like to explore the peninsula.

When to go: Early spring to late autumn is the holiday season, with the summer months most crowded. In winter, temperatures are mild, making walking and visiting historical sites much easier. The Bodrum Cup yacht regatta takes place in October, when it is still warm. Ramadan – the month-long Muslim fast – begins on August 22, but with most restaurants open as usual, it will go largely unnoticed by tourists.

Accommodation: Mainly small and medium-sized hotels with many budget lodgings. Every category well represented, including a few five-star hotels on the edge of the resort.

Beach: A narrow sand and shingle beach stretches for 350 yards east of the castle. Sunbeds and parasols are for hire and eateries line the promenade, but there are no water sports or lifeguards. More impressive beaches exist in Bitez, six miles away, and Turgutreis, 14 miles away.

By day: Exploring the town, including St Peter’s Castle, the stone amphitheatre, and the ruins of the Mausoleum of Halicarnassus, one of the Seven Wonders of the Ancient World.

By night: Many music bars in the centre and waterfront areas; some impressive nightclubs including a large open-air venue on the edge of the resort, popular with both tourists and Turkish people.

Excursions: Ferries to Kos and Rhodes; coastal cruises; Ephesus; Pamukkale with its limestone formations; villages and bays of the Bodrum peninsula.

Airport: The local airport is Bodrum Milas (BJV); the flight time from the UK is approximately three-and-a-half hours

According to Turkish Culture and Tourism Office director Irfan Onal, one major reason that Bodrum’s image has been pegged squarely at the lower end of the market is the quality of its hotel stock.

“The lack of upmarket hotels in tour operators’ brochures for Bodrum is clearly a factor in this misperception,” Onal says.

However, the area does play host to a smattering of higher end options to pitch to clients in search of some affordable luxury. Here are three options:

What? A 173-room, stucco-stepped five-star complex | Where? A remote clifftop, eight miles outside Bodrum town | Why? Idyllic location and award-winning spa | Who? Those who like deluxe privacy and a great beach | Book it:kempinski-bodrum.com +90 252 3110303. Prices start from £288 per room per night twin-share.

What? A chic and simple five-star boutique property | Where? Golturkbuktu, 40 minutes from Bodrum airport | Why? Effortless, understated décor | Who? Glamorous couples with impeccable taste | Book it:macakizi.com +90 252 377 6272. Prices start from £286 per room per night twin-share

What? A 12-room boutique art hotel | Where? A tranquil corner of Torba Bay, 30 minutes from Bodrum airport | Why? Guests can make use of a private yacht, beach and art classes | Who? Arty types looking for something intimate and decadent | Book it:casadellartebodrum.com +90 536 791 64 64. Prices start from £245 per room per night twin-share.

Sovereign Holidays has seven nights’ bed and breakfast at the Kempinski Barbaros Bay from £851 per person, twin-share, including one free night, return flights from Gatwick on October 1 with Thomson Airways and private in-resort transfers. sovereign.com, 0871 200 6677

Peter Sommer Travels offers a range of combined gulet cruise and archaeological tours throughout the Bodrum peninsula, including the seven-day Bodrum to Didyma tour starting on October 10. This costs £1,445 per person, including accommodation on a gulet, all meals and excursions. petersommer.com, 01600 888 220