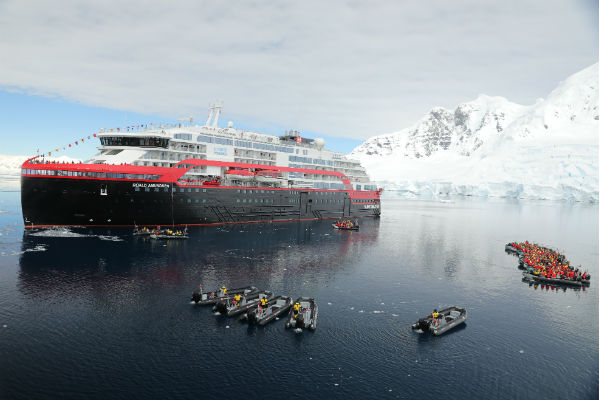 They were joined by passengers and crew on board Hurtigruten’s MS Midnatsol while on an expedition cruise in Antarctica.

A chunk of ice replaced the traditional bottle of champagne for the naming by godmother and polar pioneer Karin Strand in Chiriguano Bay off Brabant Island.

The 530-passenger ship honours the legacy of its namesake polar explorer by sailing to destinations such as Antarctica, Alaska and the Northwest Passage.

Hurtigruten CEO Daniel Skjeldam said:“I believe Roald Amundsen would be proud. With the ship carrying his name and legacy, Hurtigruten is pushing borders, challenging the industry, and keep pushing towards a greener and more sustainable operation.

Strand asked for the traditional godmother gift to be replaced by a donation to Hurtigruten Foundation, set up to contribute to areas Hurtigruten explores.

“We want to use this first ever Antarctica naming ceremony to pay our respects to our oceans, the environment and past and present explorers,” Skjeldam added.