“This was the first holiday on the first day we could go,” says Gary. He’s travelling in a group of six and they’re clearly keen to get away.

The three couples, from Epsom, are on the 6am departure from Gatwick to Porto Santo, Madeira, on a Tui package holiday. But not any Tui package, it’s the first holiday to depart on May 17 – the date from when leisure travel is no longer illegal after the latest Covid restrictions.

They switched from a booking they had to Rhodes. Not because you can’t travel to the amber destination – one of five Greek islands the Foreign Office does not advise against non-essential travel to – but because they were unable to self-isolate on their return, a requirement of travelling to an amber list destination.

In fact, he says: “We’ve been to Rhodes plenty of times before, but this is our first time to Porto Santo. So it’s broadened our horizons.”

Madeira, and the rest of Portugal, is on the green list – meaning you don’t have to self-isolate on your return – but you do have to take a PCR test on day two of your return. And, as with any international journey, you must take a pre-departure PCR test before you can leave the UK, too.

“Because [the testing process] is so new it was difficult to navigate,” admits Gary. “Once people get used to the testing and all that they’ll be happy to travel,” he adds.

Price is also a barrier. Gary and his wife paid £360 for their tests – they went directly with a private provider rather than taking Tui’s testing package, as I did.

Three couples from Epsom on their way to Porto Santo, Madeira (green list) having changed from Rhodes (amber list). They’re pretty keen to travel. Gary says: “It’s the first holiday on the first day we could go” pic.twitter.com/SSLwaqvKR3

“Further down the road there will be a lot more options,” he reckons, making the point that testing has become part and parcel of everyday life, so shouldn’t deter people from going on holiday if they feel safe doing so. A bit like testing to go into work, or at recent event trials like the FA Cup final.

But he would like it to be cheaper. Wouldn’t we all. He’ll join the industry in keeping fingers crossed that the efficiency of lateral flow tests (which are free) becomes safe enough for travel and is signed off by Grant Shapps’ taskforce at its next review.

The mood at Gatwick was as if this whole gradual restart is one big trial run, before the full return of holidays. Given the initial green list comprising just 12 countries – and only one mainstream holiday destination – it certainly feels that way.

Of course it does. They’re not just checking your passport and printing your boarding pass, they’re checking your Covid test status too – and those of us travelling to Madeira must show negative confirmation from both the testing provider and in the Madeira Safe app run by the destination.

Inevitably, not everyone has all their documents ready – but that might improve as people become accustomed to the new protocols. Multiply the extra check-in time by multiple flights and the obvious conclusion is to arrive at the airport with a little more time to spare.

Check in fairly seamless, and everyone cheery (for 4:30am) Fair to say we’re all getting used to the extra protocols: you MUST show proof of a negative PCR test taken within 72 hours and, for Madeira, registration with Madeira Safe. But it’s all in one go so not too arduous. pic.twitter.com/ugS2PqgCRk

That said, going through security is the same as last summer – masks and all – but no more stress than it ever was and, once you’re through, the airport experience is no different to before.

No seat restrictions as far as I could see. By the end of June, all physical distancing restrictions could be lifted. Hopefully airport departure boards might look a bit busier by then; you’d certainly expect so if more destinations join the green list.

On board the aircraft feels a bit like attending a hospitality venue. Masks unless you’re eating, distancing where possible. People generally quite excited to be out and about, despite the early start. 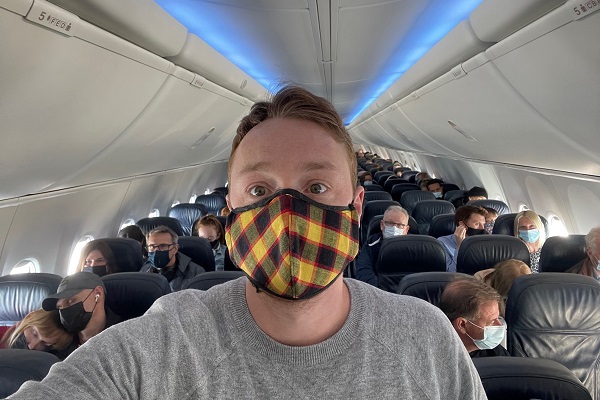 Arriving at Funchal seemed a novelty, not least because of the time it’s been since leisure travel was allowed from the UK, but also getting a stamp in your passport from an EU country.

The minor additional procedure here, after passport control, is to have your Madeira Safe registration checked. Those who downloaded the QR code entered a fast-track lane where it was scanned and you went on your way. Another lane existed for those with email or printed confirmation of their negative test result.

Given current passenger numbers we breezed through, but it’s easy to see how this may get busier by the summer.

In resort, the first holidaymakers to touch down were relieved that their plans had gone ahead – many of them having altered them at least once.

London friends Vivien, Cherry, Sandra and Babs, were booked to go to Turkey on May 18 until it was placed on the red list on May 7.

“We would’ve gone if it was amber,” said Cherry. “We still wanted to get away, so we thought we’d give Madeira a go.” 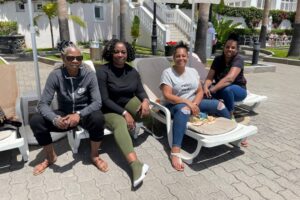 Babs explained: “We can all work from home, so we were prepared to self-isolate at home if we needed to. We factored that in and would’ve stuck with Turkey if it didn’t go on the red list.”

They did, however, find the testing process a chore. “It’s not the taking the test that’s the problem,” said Sandra. “It was the communication. It feels like no one is talking to each other, the government, the travel companies and the testing companies.”

The four friends paid different amounts having booked with different providers, ranging from £90 to £155 – with those paying more buying duplicates because they didn’t trust the tests would arrive in time.”

“We knew we had to spend on tests,” said Vivien. “Everyone seemed to have different information and it’ll take some getting used to.”

Asked if the experience would put them off booking another holiday, the group – each of whom said they usually travel twice a year – firmly and collectively said no. “We knew we were going to be the guinea pigs,” said Sandra. “It’ll get better over time.”

One lesson they have taken away is a greater understanding of the protection offered by a package holiday.

Cherry said: “Before [Covid] I used to book a flight by myself and get a hotel on Booking.com. I wouldn’t necessarily do that anymore because I wouldn’t be covered. When we booked in September we chose Tui because we knew it was a package booking so we’d be safe with refunds.”

They praised the customer service, when they did get through after a “long wait”, and said Tui agents in the company’s call centre were “helpful and patient”.

“They took on board all the concerns we raised,” said Cherry. “Customer service is the key thing.”