“We have only two ingredients,” says Luca Ghiaroni, a producer of balsamic vinegar, in his soft Italian lilt. “One is the cooked grapes, and the other is time. And maybe a third one: passion.”

Standing in the loft of his farmhouse in the hills outside Modena, surrounded by dozens of tiny wooden barrels and with the unmistakable scent of vinegar on the air, it’s easy to see where the passion comes in.

This is no easy process. The vinegar room at Bonini Modena is filled with sets of miniature barrels lined up like Russian dolls in descending order of size: first cherry wood then chestnut, apple, pear and oak. The dark nectar is moved from one to the next, just a little each year, losing volume but gathering sweetness as it ages, until it finally reaches the smallest of the set. Only then can it be served with the seal of traditional balsamic vinegar.

Since that can take anything up to 25 years, this is no get-rich-quick process – it’s a love affair handed down through families. A batch might be started to mark the birth of a child, only to be given as a wedding present a quarter of a century later. Talk about planning ahead.

Then again, they do take their food seriously in this part of the world. We’d already come across winemakers with a love of the grape, pasta chefs ready to knock up gnocchi or cappelletti in a matter of moments and, boasting one of my favourite job titles, cheese masters who make proper Parmigiano Reggiano in wheel after enormous wheel.

Even in a country renowned for its food, Emilia Romagna is famous – think Parma ham, Parmesan cheese and Bolognese sauce, just for starters – so it’s no surprise so many gastronomic tours centre on tastings and agriturismo stays along the Bologna-Modena‑Parma trail.

Yet this area is remarkable for something other than its food: dubbed ‘Motor Valley’, it’s also the region that gave rise to Ferrari, Maserati, Lamborghini, Pagani and Ducati. The people here are as proud of their supercars as they are of their superfoods, so much so that even non-petrolheads like myself can find themselves unexpectedly in thrall to those sleek curves and thrumming engines. 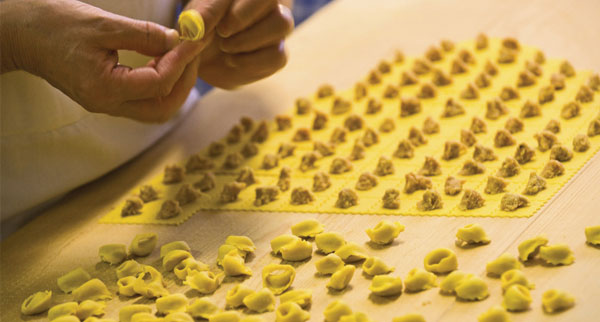 It was our first night at Cavazzone, a family-run agriturismo near Reggio Emilia, about an hour’s drive west of Bologna (from £64 a night). With its biscuit-coloured stone farmhouses overlooking rolling green valleys, it’s the sort of place that usually appears only in romance novels, so the ideal setting for an evening pasta‑making lesson.

The chef spoke only Italian, so with help from his English-speaking assistant, we watched as he deftly whipped up a buttercup-coloured dough in minutes, and began to demonstrate the art of shaping rows of identical ravioli and tortellini.

While Italian children learn this life skill at their grandmother’s apron, it doesn’t come quite so naturally to us, but feeling brave I volunteered to go first. Rolling the dough was fine, if a little clumsy; for piping out dollops of filling, I’d give myself a C; but for folding the pasta over, it was most definitely an F, as the whole thing collapsed in a heap.

Luckily the chef came to my rescue and we managed to salvage something from the mess (unless they have a secret store of pre-made pasta for when the lessons go horribly wrong) and enjoyed a delightful alfresco dinner on the terrace. The moral of the story? Leave it to the locals, and you won’t go hungry here. 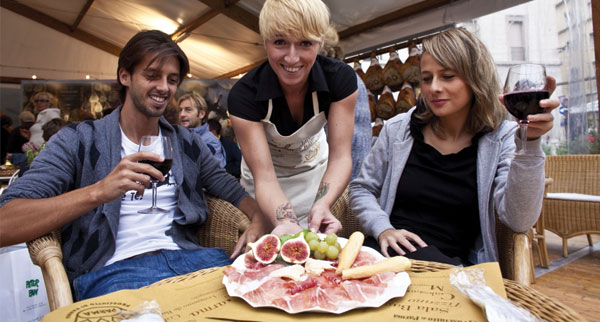 This region has been championing local produce since long before it was the in thing, and one spot that could have invented the #farmtofork hashtag is organic farm Hombre. Its 500 Friesian cows are within steps of the milking shed and small-scale cheese factory, where the cheese master – yes, that is a real job – turns out 14 hulking wheels of Parmigiano Reggiano a day.

They are stacked high in a huge warehouse, also on-site, to be aged for anything from 12 to 36 months – getting richer and crumblier as the months pass – before being sold for about €660 a round. The practice dates back to the 13th century, when the Benedictine monks of Modena’s cathedral first began producing their own food and wine.

A local speciality that has also seen success in the export market is lambrusco – but before anyone over 40 starts getting flashbacks to the cheap-and-cheerful plonk of the 1980s, it’s a different story today. Winemakers such as the youthful Mattia Montanari, vintner at Opera 02, a more modern take on the agriturismo experience, produce bottles that easily go for $40 or more in the restaurants of New York or Tokyo. Sure, these sparkling reds go down better in the US and Japan than they would for the British market, and they weren’t quite to my taste, but it’s worth keeping an eye on a protected local product that’s attracting some serious investment. And if nothing else, a visit to Opera 02 is a must for the excellent restaurant and to-die-for views alone. 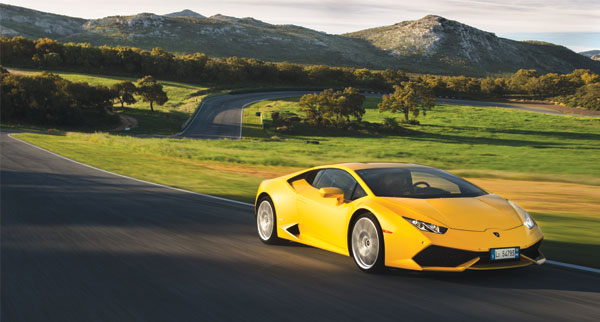 On the subject of serious investment, little could match the eye-watering sums the latest cars by Lamborghini – whose factory is between Modena and Bologna – command.

The Huracán’s price tag, a mere €170,000, is nothing to the Aventador, which starts at €280,000 (taxes not included), but a tour around the production line does at least show the amount of effort that goes in to making every one of these supercars.

“Luckily the chef came to my rescue and we managed to salvage something from my pasta-making mess.”

Brought in to the spotless white factory as nothing more than a shell and a chassis, the cars move one stage at a time around an enormous production line, spending a regimented 37 minutes at each station, where workers build each engine by hand, fit every component, and hand-stitch each section of its leather interior.

Unfortunately the €75 factory tour fee doesn’t include the chance to take one home. But staff do at least get to borrow one for their wedding day – almost worth tying the knot for – and there are some beautiful classic models in the adjacent museum.

It would be unfair to wax lyrical on the joys of a peek inside a Lamborghini without looking at some of the other car giants headquartered here, and the Ferrari Museum in Modena doesn’t lack in the fast car stakes. The display of Enzo Ferrari’s first car – his dad’s De Dion-Bouton, top speed 37mph – is endearing enough, but its Driving with the Stars exhibition, showcasing models owned by celebrities past and present, is sure to convince anyone of the beauty of these cars’ slick curves and speedy engines (entry €15 adults, €5 under-18s).

The cars are no less polished at the homely Panini Motor Museum – oddly enough, set on the same Hombre farm as the cheese maker, and named after founder and football card manufacturer Umberto Panini. It features classic Maserati cars from the 1950s and 60s, and standout vehicles such as the rocket-like car that Stirling Moss raced around Italy’s Monza track in 1958. If that doesn’t fire up your engines, nothing will.

Fico Eataly World, a foodie theme park, is set to open in October in Bologna
eatalyworld.it/en 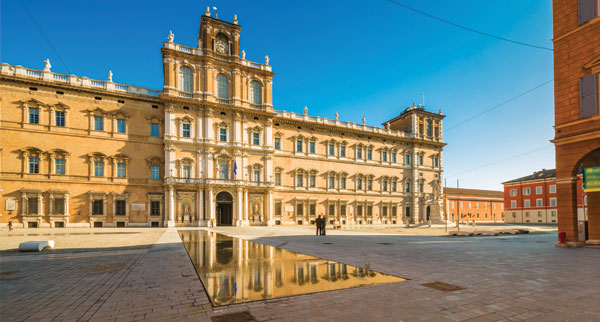 Modena Cathedral: Started in 1099 and not completed until 1319, this is a masterpiece of Romanesque architecture. Look out for the risqué stonework on its exterior.

Albinelli Market: A feast for the eyes and taste buds, this market is packed with cured meats, glistening olives and pasta in all shapes, and was a setting for US comedy Master of None.

Ducal Palace: This grand Baroque palace is elegant from the outside, but at certain times allows pre‑booked guided tours to see its Roman statues and military memorabilia.

Osprey Holidays offers three nights in Bologna staying at the three-star Porta San Mamolo with breakfast, car hire and flights from Gatwick in November, from £315.
ospreyholidays.com