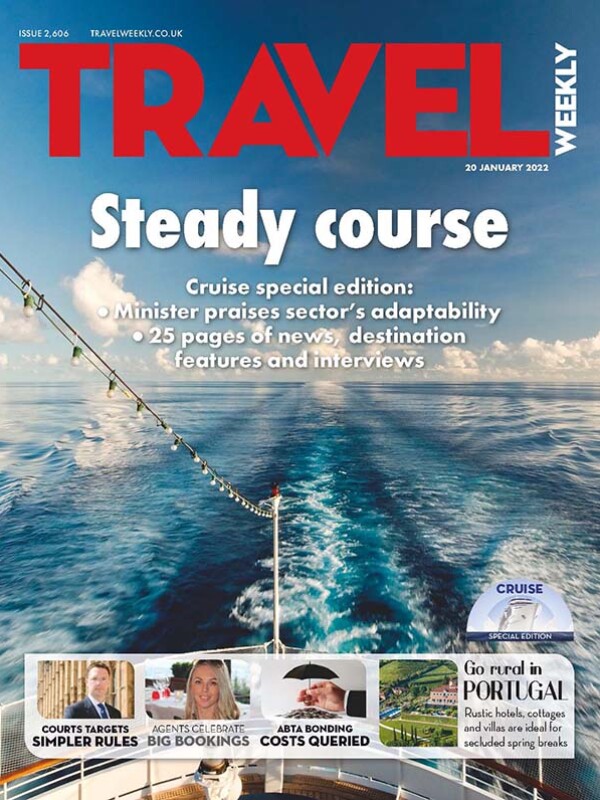 Travel Weekly releases a full digital version of the magazine every Wednesday.

To receive the digital edition as soon as it comes out:

February 18 – Give us a break, Boris
Industry banks on PM’s roadmap to provide a framework for travel’s restart if not a date

December 17 – Will the tide turn?
Trade hopes for momentum in 2021 as devastating year draws to a close with fresh setbacks

November 5 – Back to square one?
Advantage chief says lockdown ‘takes us back to March’ but some agents welcome access to grants and furlough scheme

July 16 – Slow return
We join Tui as it restarts operations, but boss warns progress will be gradual

April 9 – Holding on
Travel firms battle to stay in business, serve customers and plan for future as wait for government action goes on

April 2 – What next?
As the lockdown brings high streets to a standstill industry leaders call for further support

January 16 – Cruise controls
As lines face new emissions rules, we look at opportunities and challenges for the sector in this 112-page special edition

Could the stage be set for Super Break to Make a return under its founder?

July 4 – Florida Fairytale
We team up with Disney Destinations to bring you the biggest and best Cover Stars yet!

May 30 – Back of the net!
Travel teams raise £20k for Reuben’s Retreat in first MSC Cup at Chelsea FC

May 9 – Are you liable?
Lawyers warn ‘confusion’ still widespread
among agents over Package Travel Regulations

November 1 – Atas, Smith and Jones
The best in touring and adventure were joined by celebrity guests at the second annual Atas Conference in Birmingham

August 23 – Time to shine
Cover Stars is back, and this year YOU could be heading to Miami and the Bahamas with NCL!

August 16 – How was your weekend?
Your guide to adventure trips for customers short of time

May 24 – Over and above
Your guide to Asian stopovers in Hong Kong, Singapore, Kuala Lumpur and Bangkok

April 5 – Pirates of the Caribbean
Royal showcases Symphony of the Seas to trade and media, and unveils plans to build four more ships

January 25 – You’ve been famed!
TV star Harry Hill shines a light on the industry’s finest at the Globe Travel Awards

October 26 – All smiles?
As Thomson bows out, will Tui put a smile on customers’ faces?

June 29 – Cyber threat: act now
Experts warn travel firms to take their heads out of the sand over cyber security

May 18 – A cheer in Provence
Advantage agents hear from cyber experts, a mischief-maker and Sir Chris Hoy at conference in France

May 11 – A Hoy there!
Olympic champion Sir Chris Hoy tells Travel Weekly that agents must ‘aim for the stars’ ahead of Advantage speech

October 27 – At last!
Trade welcomes go-ahead for a third Heathrow runway but the plan faces years of legal wrangling

Nominations open for the most sought-after awards in travel

June 30 – Keep calm and carry on?
Brexit hopes and fears: All the reaction to the historic vote

June 16 – EU: In or out?
We assess industry’s view ahead of next week’s referendum

May 19 – Special agents
Will the sale of Tui’s Specialist Group as Travelopia be a welcome gift for the trade?

April 14 – Up, up and away
VisitEngland champions ‘Amazing Moments’ in new domestic campaign as UK visitors surge 9%

January 7 – Screen best?
Who are the winners and losers in the turn-of-year TV ad campaigns?

November 19 – Where is safe nowadays
As Paris reels from terror atrocity and the UK steps up airport security, one industry expert asks

pick up the most sought-after award in travel

July 2 – Terror on the beach
The reaction, aftermath and impact of the day tourists were massacred in Tunisia

July 31 – The boys head Down Under

May 22 – Play the Advantage