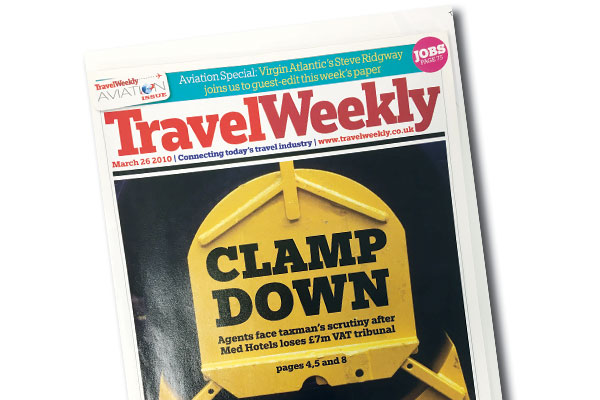 We take a look through the Travel Weekly archives to find out what was making the headlines 10, 25 and 45 years ago.

• Travel Weekly launched a campaign for a dedicated government minister for tourism. The ‘Yes Campaign’ ran ahead of the general election. Abta also called for the creation of a dedicated minister. Agents were urged to call on their local parliamentary candidates to support Abta’s manifesto.

• Dynamically packaging agents were warned they could be in for a tax bombshell after Med Hotels lost a £7 million VAT tribunal case. A judge ruled the bed bank had been acting as a principal despite its claim to have been an agent of hoteliers, during a period when it was owned by lastminute.com.

• The Civil Aviation Authority was poised to unveil a draft agreement allowing agency consortia to cut the cost of consumer protection by holding an Atol on behalf of their members.

• Meanwhile, agents demanded a guarantee from British Airways that it would not increase its direct marketing, after being praised for minimising disruption during the carrier’s first strike. 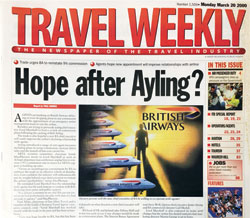 • Airtours chairman David Crossland appeared close to achieving his long-held ambition to overtake arch-rival Thomson as the UK’s biggest operator. Having added around 5% capacity for the summer, Airtours was tipped to claim a 24% share of the 10 million summer package holiday market for 2000 – the same share as Thomson, and ahead of JMC (22%) and First Choice (19%).

• Agents hoped for a delay or halt to BA’s plans to axe commission after the appointment of an emergency management team under Lord Marshall after Bob Ayling was sacked.

• Thomson announced it would close some shops and offload non-core businesses to save £50 million a year by 2002.

• The franchise between Advantage and Airtours was effectively scrapped amid a litany of broken promises, poor sales and in-house bickering. 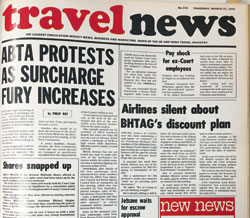 • Surcharges dominated the headlines this month, with Abta leading talks with BA to lodge a protest. Trade anger mounted at the level of surcharges on many scheduled air-based holidays to cover higher fuel costs. Surcharges even varied within the same country, such as £8.50 for Alicante and £13.50 for Barcelona.

• Ex-Lunn Poly boss Ray Barker caused a stir by producing the first guide to compare operator package prices in Europe. Barker’s Guide for summer 1975 showed considerable differences in prices for the same hotel, and in some cases, the same aircraft.

• Meanwhile, Intasun was asked by Abta to reconsider its advertising, which promoted prices such as £23 for 14 nights in Benidorm. The prices applied to children under 11 sharing accommodation with a parent in April – a fact pointed out only in a footnote.