• The big story this week was the news that Travel Republic and its managing director Kane Pirie had been cleared of all charges related to breaching Atol regulations in a court victory predicted to see more companies operating without a licence. In a case brought by the CAA, the online travel agency had been accused of breaching Atol regulations by selling unlicensed package holidays. But judge Nicholas Evans said the prosecution had failed to prove Travel Republic did anything other than “sell components of holidays separately but at the same time”.

• In other news, Youtravel.com became the latest bed bank to quit Abta, while Tui Travel announced it would not work with hotels and destinations that did not meet sustainability standards in the Travelife Sustainability System within five years. 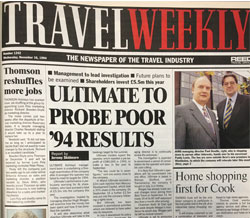 • Thomas Cook became the only travel firm to participate in the UK’s first public trial of an interactive home shopping system, allowing customers to use the TV and phone to book holidays.

• Airtours axed its Cuba programme, leaving Sunworld as the only UK company operating charters to the island in 1995.

• And an analysis article looked at the future of camping holidays following fears expressed by Eurocamp that the sector was reaching saturation point and needed to sell alternative French holidays. 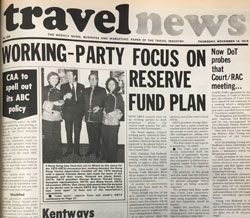 • Abta set up working parties to draft proposals about the proposed reserve-fund scheme for submission to government, while a definitive policy on ABC flight marketing and pricing was expected to be outlined this week by the Civil Aviation Authority.

• Meanwhile, it was reported that  Ireland’s reputation for poor hygiene was a barrier to the full development of its tourist industry, with dirty pubs and hotels and a poor attitude to litter said to be costing around £1 million a year in lost revenue.

• Thomson Holidays came up with a “fair trading charter” for agents, setting out commission levels for summer 1975. These included 10% commission on all invoiced items and 10% on the holiday price on bookings cancelled after the balance had been paid and within the cancellation period.