• The trade was “cautiously optimistic” about summer 2010 sales. But as agents battled to get into their shops after snowfall of up to 18 inches, winter holiday sales continued to suffer.

• A dispute between administrators of failed Scottish operator Globespan and credit firm E-Clear reached the courts this month. E-Clear was given until mid-January to prove it had the £35 million that administrators said it was withholding.

• The industry rallied to support a Just a Drop charity appeal to provide drinking water for survivors of an earthquake in Haiti that killed more than 100,000 people.

• For the first time, the industry pulled together with sector skills council People 1st to submit a bid to government to create a National Skills Academy for Travel and Tourism worth £2 million. 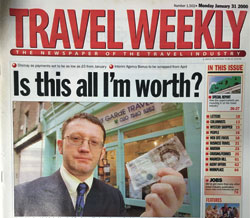 • Holiday discounts for summer 2000 reached an ‘unprecedented’ 30% after a slow start to trading. It was believed to be the first time companies had offered 30% off, with the first offered by Thomson as the market traded at around 19% down on last year.

• Agents reacted with fury to BA’s decision to scrap commission from January 1, 2001, and introduce fees from £5. BA sold 85% of its tickets through agents.

• It was revealed media giant Flextech was to sell its 12.5% stake in TV Travel Shop to Kuoni in a deal worth £7 million.

• Airtours was rumoured to be set to buy Greece specialist Manos, while Lunn Poly opened its first shop specifically for families, based in Coventry. 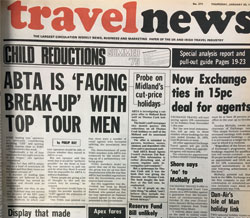 • As the trade entered its busy sales period, retailers were hopeful summer 1975 business would not be the disaster many feared if sales continued at the high levels seen in December 1974.

• It was revealed inclusive tour operators and ABC firms would be levied at a rate of 1% of turnover once legislation for the new reserve fund, set up after Court Line’s 1974 collapse, was passed.

• In a comment piece in Travelnews’ January 23 edition, the decision to cancel the Channel Tunnel project was seen as a “sad decision” by most in the trade, except cross-Channel ferry operators.

• Meanwhile, some leading operators said they were considering leaving Abta because they felt their views were not taken account of.