• Hays Travel reverted to selling some dynamic packages without Atol cover – the first major player to alter its business practice in the wake of the not-guilty verdict in the Travel Republic case.

• Meanwhile, several prominent figures were changing jobs. Do Something Different commercial director Ian Coyle announced he was moving to HolidayTaxis to become sales and marketing director.

Nishma Robb stepped down as Travelzest’s group distribution director. And Nick Wrightman, previously general manager of Tapestry Collection, was appointed by Travelzest to the role of UK vice-president of product. 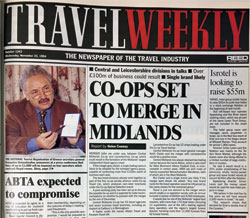 • Merger talks got under way between Central Midlands Co-op and Leicestershire Co-op, which together would form the largest independent travel agency chain in the Midlands.

• A bookings war was predicted between the multiples in the January 1995 peak sales period, amid discounts of 15%.

• Meanwhile, the Global Travel Group was on the verge of becoming the first non-Abta retailer to sell every major UK operator. The 36-shop group had reached agreement to sell First Choice and Unijet, the only two not on its racks.

• On the letters page, Suzi Stembridge, managing director of Filoxenia, warned: “If the press continues to advise the public to leave their holiday bookings to the last minute, the desperate situation which exists in the travel industry will deepen to the point that there will not be a travel industry.” 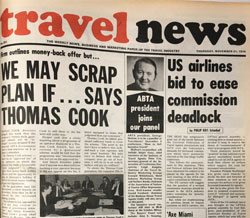 • Thomas Cook directors pledged that the company’s “money-back guarantee” scheme would be “re-thought” or dropped if the proposed Abta/government reserve fund improved on it or made it redundant.

• Qantas released images of a scantily-clad woman to showcase its new uniform for cabin crew. Designed by Emilio Pucci, the printed shirt-dress was reported to be “a surrealistic representation of Australian flowers with bird feathers as petals”.

• A marked reduction in the number of retail agents was deemed inevitable by David Balfry, chairman of Abta’s Midlands retail branch. He blamed a shortage of cash through curtailment of bank lending; the ”virtual collapse” of the package market; and withdrawal of agents’ credit by most operators.