• Poor weather at the turn of year was blamed for a poor performance in the market, with three consecutive months of growth coming to an end in January, according to official figures from GfK Ascent-MI. The British Retail Consortium called it the worst January on the high street for years.

• Tui scrapped discounts for two days to see how it affected bookings. UK managing director Dermot Blastland was inspired by the story of a Chicago prostitute who increased fees by 67% by identifying which clients would pay more. In the Tui trial, bookings fell by 50%. “Crucially, that told us that 50% weren’t fazed,” he said. Tui then trialled smaller discounts, and said it was confident it could make up for a sales drop by an increase in holidays sold at a higher price.

• A rival lobbying group to Abta to influence government policy was mooted.

• An industry seminar was told that proposed changes to the Atol regulatory regime to include component sales could be challenged as anti-agency and anti-competitive.

• And Carnival UK rejected claims it was sidelining smaller agents. 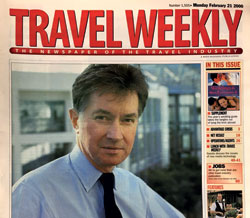 • The front pages this month were dominated by BA’s plan to axe agency commission from 2001. The airline planned to bring consultants from the US to advise retailers how to charge service fees to make up for lost commission.

• A straw poll by Travel Weekly found consumers were unaware high street agents were offering discounts of 30% off summer 2000 holidays, with many believing it was still better value to bag a last-minute bargain. The market was 2.6% down on last year with post-Christmas sales down 8%. 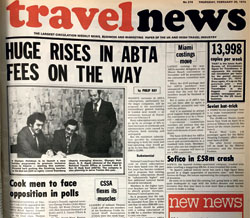 • The future of Horizon Midlands as an independent company was ensured with the acceptance by Court Line’s liquidators of an offer by a consortium for a 58% controlling stake. It was disclosed The Thomson Travel Group, holding company for Thomson Holidays, Britannia Airways and Lunn Poly, was a member of the consortium.

• Travelnews revealed talks over proposals for a big hike in Abta subscriptions, particularly for larger companies, would take place next month. Basic subscription rates were set to go up by 25% to meet rises  in overheads and administrative costs.

• The number of holidaymakers that went on package holidays in the first half of 1974 was down by 27.3% on the same period last year, according to the Department of Industry.