Get the lowdown on Lake Como with Nick Redmayne’s guide to the main resorts that line its shores.

The third-largest of Italy’s lakes and shaped like an inverted ‘Y’, Lake Como is close to the Swiss frontier, about 25 miles from Milan.

Since Roman times, a dependable subtropical climate, due in part to the lake’s immense volume of water, has drawn those in search of relaxation. The British – of aristocratic means or aspiration – discovered the region from the mid-19th century.

Today, Como’s shores are populated by villas owned by the great, the good and those with clever accountants. From old-money grandees and business tycoons to oligarchs and Hollywood royalty, Lake Como exerts an irresistible allure.

However, for the most part, those visiting keep a low profile – it’s about being, rather than doing. Here’s a run-down on four main resorts. 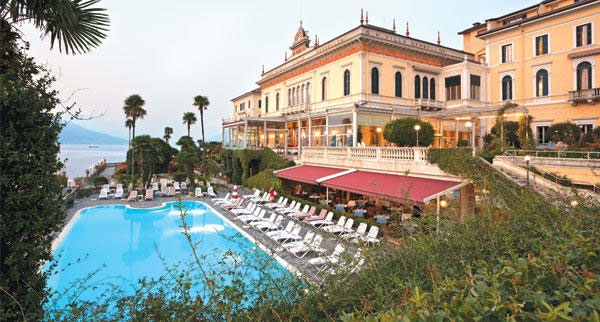 See: Located where the lake’s ‘legs’ separate, Bellagio is the best known of Como’s villages. Most ferries stop here, and for clients who want to explore it’s an excellent base – the tourist office is right next to the jetty.

There’s a wide choice of upmarket cafes and restaurants, though as tourists far outnumber residents, it’s harder to find a simple trattoria. Café Rossi, off Piazza Mazzini, is delightful and oozes old-world character, while steep cobbled lanes, home to some of Como’s fine-silk emporia, lead to Piazza San Giacomo and its Romanesque basilica.

“There’s a wide choice of upmarket cafes and restaurants, though as tourists far outnumber residents, it’s harder to find a simple trattoria.”

If shopping’s not your bag, the well-kept gardens of neoclassical Villa Melzi make a romantic shoreline stroll. Elsewhere, 17th-century Villa Serbelloni, the Rockefeller Foundation’s secretive retreat for scholars and artists, offers guided tours of its formal gardens – no photographs permitted.

Nearby: The Fondo Ambiente Italiano’s (Italian National Trust) flagship property, Villa del Balbianello, lies close to Bellagio. The villa was bequeathed to the FAI in 1988 by its last owner, the collector and explorer Guido Monzino. The loggia contains a collection of maps and books, while upper floors of the villa are dedicated to Monzino’s expedition memorabilia. Balbianello has also played a supporting role in many movies, including Casino Royale and Star Wars: Attack of the Clones.

Stay: The Grand Hotel Villa Serbelloni is an elegant and historic family-owned five-star hotel with a Michelin-starred restaurant. Its guest register features John F and Jackie Kennedy, Franklin Roosevelt, Winston Churchill and a host of contemporary figures. Plus there’s space for your Bentley out the front. Doubles from €473.
villaserbelloni.com 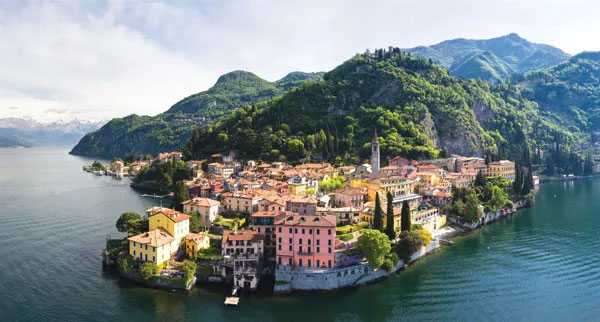 See: Facing Bellagio, on the central lake’s eastern shore, Varenna has a reputation for being quieter and less ‘touristy’ than other villages. Certainly, its pastel-coloured waterfront presents less of a grand façade, lending a lower-key, more authentic feel.

Behind the narrow, stony beach, cobbled lanes populated by smaller bars, cafes and restaurants lead up to the central Piazza San Giorgio and its frescoed 14th-century churches. The gardens of Villa Monastero (entry €5) are a highlight and extend a mile and a quarter to Fiumelatte, claimed as Italy’s shortest river. Also close by, the terraced botanical gardens of hotel Villa Cipressi can be explored for a small fee. Accessible by a steep track, the fortress of Castello di Vezio dominates Varenna, rewarding those who make the climb with panoramic views.

“The gardens of Villa Monastero (entry €5) are a highlight and extend a mile and a quarter to Fiumelatte, claimed as Italy’s shortest river.”

Nearby: For a proper hike, the 30-mile Sentiero del Viandante trail passes through the village on its way around the lake’s eastern shore from Abbadia Lariano to Colico – the southern section is a good day’s walk.

Farther afield, Varenna lies on the mainline to Milan Centrale. The cheapest tickets to Milan cost €7 for the one-hour journey, and taking the train avoids machinations surrounding city‑centre parking.

Stay: Villa Cipressi is a small three-star hotel in a delightful 14th to 18th-century building overlooking the lake. It’s more gracious than glitzy – there’s no air-con – but its gardens are a Varenna highlight. Double rooms from €240.
hotelvillacipressi.it 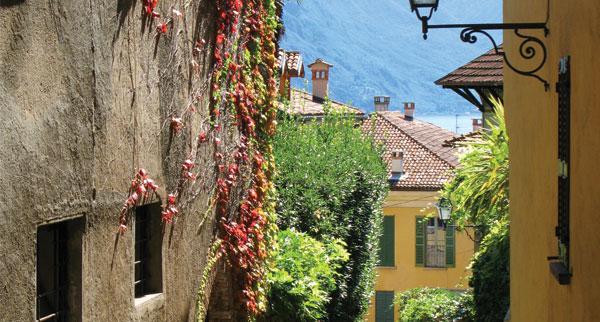 See: Historically an important trading centre at one end of the Menaggina Valley, Menaggio lies on the western shore of the central lake area and is one of Como’s busiest villages.

There’s more than just tourism here – something to consider in the off-season when some of the villages, hotels and restaurants enter a state of semi-hibernation. As such, some visitors describe a diminished sense of romance. That said, all things are relative – this is Italy.

Up from the harbour, cafes on Piazza Garibaldi offer a relaxed perspective on the frenetic comings and goings of locals and tourists alike. Cobbled streets and shady, narrow alleys lead up into the medieval town.

“At the top of the village the ruins of a substantial 10th-century castle and vestiges of the town’s perimeter walls provide clues to Menaggio’s strategic importance.”

Along Via Annetta e Celestino Lusardi, look out for the bell tower of Chiesa San Stefano. Inside are frescoes by local artist Tagliaferri, as well as important paintings by the Lombard School. Continuing farther, at the top of the village the ruins of a substantial 10th-century castle and vestiges of the town’s perimeter walls provide clues to Menaggio’s strategic importance, an attribute that endured to the Second World War.

Nearby: Menaggio’s position lends itself to forays into Switzerland. Buses take less than an hour to the lakeside town of Lugano and cost just €2. The Swiss Alpine resort of St Moritz combines with the scenic Bernina Express train journey in another popular excursion.

Stay: The four-star Grand Hotel Menaggio has its toes in the lake and sits right next to the ferry jetty, so is ideal for excursions. Not competing with state-of-the-art five-star properties, the hotel’s charm lies in its classically Italian, relaxed but elegant style. Doubles from €162.
grandhotelmenaggio.com 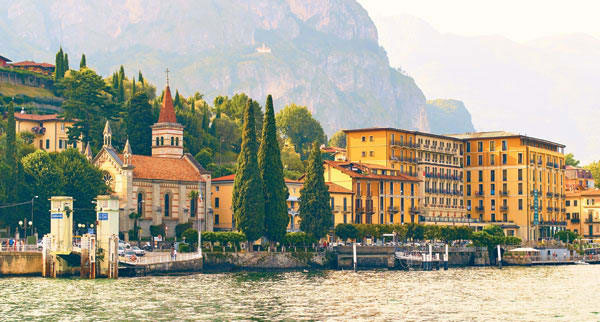 See: Also on the central lake, the swathe of hotels between Griante and Tremezzo, along the western shore road, has long been a summer favourite with British visitors. It’s easy to see why. Views across the lake to Bellagio and the mountains of the Grigna massif beyond are sublime. Near Cadenabbia, the 19th-century Anglican Church of the Ascension has an active congregation and underlines the British connection.

The area is well served by ferries and buses, allowing access to the rest of the lake. However, although there are some independent restaurants and cafes, it’s difficult to identify much of a centre, and most nightlife is closeted within the confines of hotels.

“Near Cadenabbia, the 19th-century Anglican Church of the Ascension has an active congregation and underlines the British connection.”

Nearby: Regular sightseeing boat trips leave from Tremezzo’s jetty. To see what €90 million could buy, take a look at George and Amal Clooney’s Villa Oleandra, then call in at Isola Comacina for a cappuccino and tranquil stroll.

Alternatively, the bus journey to Como town takes an hour and costs €5. From Como, the Brunate funicular’s seven-minute ride costs €5.50 return and is a quick way to enjoy spectacular views over the lake and the Alps.

Stay: The three-star Hotel Britannia Excelsior is owned by an Anglo-Italian family and has an enviable location, the best of its 284 rooms blessed with stunning lake views. The hotel is a good-value base, offering three attractive all-inclusive tariffs. At peak times the main restaurant can be busy, but an elegant à la carte lakeshore option is included on the ‘platinum’ all-inclusive tariff. Doubles from €110. hotelbritanniacadenabbia 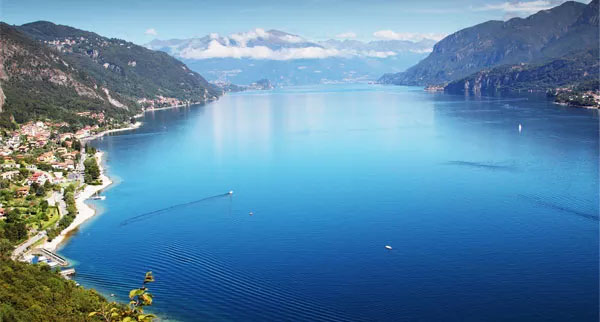 Tui Lakes & Mountains offers a week’s all-inclusive at the three-star Hotel Britannia Excelsior in Cadenabbia from £734, including flights from Gatwick to Milan and transfers on September 22.
tui.co.uk

Novasol offers a five-star holiday apartment for up to four in Griante, with one bedroom, bathroom, living room, kitchen/diner, shared pool and lake-view balcony. Prices start at £805 per apartment for seven nights’ accommodation starting September 29; flights not included.
novasol.co.uk

Italy is relatively easy to reach from the UK, with a wealth of flights and ever-easier rail connections available via Eurostar and the Italian rail network.

However, self‑drivers who are travelling from Scotland and northern England can avoid the long drive to Britain’s Channel ports by taking the DFDS overnight ferry from Newcastle to IJmuiden (Amsterdam), with daily departures lasting 15 hours.

Crossings start at £72 per person each way for a saloon car and two people, including a Standard en suite cabin, or £92 if upgrading to a Commodore Class cabin. Family cabins are available.
dfds.co.uk