Katie McGonagle heads to the home of golf for a lesson in Scottish hospitality.

The sky might be blue and the clouds white and fluffy, but this is what could best be described as a ‘brisk’ day on the west coast of Scotland. Gusts of wind roll in from the sea across the famous Ailsa course, making the flags stand straight and my collar stand up, as I get ready to tee off.

Maybe I could blame a stray flurry of wind for the ball not hitting its mark, I wonder, getting the excuses for my lack of golfing prowess at the ready before I’ve even started.

This is the course where Jack Nicklaus and Tom Watson battled it out in their famous Duel in the Sun of 1977; where Greg Norman and Nick Price won their respective Open Championships; and where Colin Montgomerie came to practise a couple of weeks before my visit. I’m just hoping to be able to hit the ball.

I wiggle my feet into position at the tee, swing the club back and then forward in what passes for an arc, and hear a satisfying ‘thunk’ against the ball before it sails up into the air – and then plonks down, no more than 15 feet away. Rory McIlroy need not tremble in his boots just yet, then.

Luckily, we’re taking our practice shots on the driving range adjacent to the legendary course, where ever-patient golf coach Stephen can take us through the basics without getting in the way of the ‘proper’ players.

The Ailsa is the flagship course of the sprawling Trump Turnberry, A Luxury Collection Resort, in Ayr, on Scotland’s west coast. It lays claim to being the first golf resort in the world – which is feasible, when you consider the earliest course here dates from 1902, and the hotel itself from 1906.

It opened as a railway hotel and the tracks – no longer in use – can still be seen just outside the entrance. The grand property went on to serve as an air force base and Second World War hospital, resuming life as a hotel in the 1950s. It was acquired by Trump Hotels in 2014 and given an eight-month refurbishment. 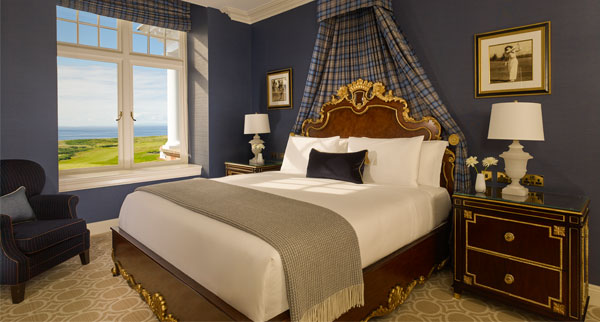 If there is a thread running through the hotel, it’s golf, with suites named after Open Championship winners and yellowing photos of past players lining the walls. Coming a close second is the pride in its Scottish heritage, with staff in kilts of Turnberry tartan, a trio of colours picking up on the shades of the sea, the land and the grey rock of Ailsa Craig – a tiny island visible on the horizon from every sea-facing window – where granite is quarried for curling stones, and gannets and puffins find sanctuary from the sea.

The sweeping views from the Ailsa course are hard to beat, but golfers can find similarly distracting vistas on King Robert the Bruce, an 18-hole, par-72 course that opened in 2017. It takes its name from the legendary Scottish warrior born in Turnberry Castle in 1274, on the site where Turnberry Lighthouse now stands. There’s also a nine-hole Arran course for those without the time to take on the full 18. 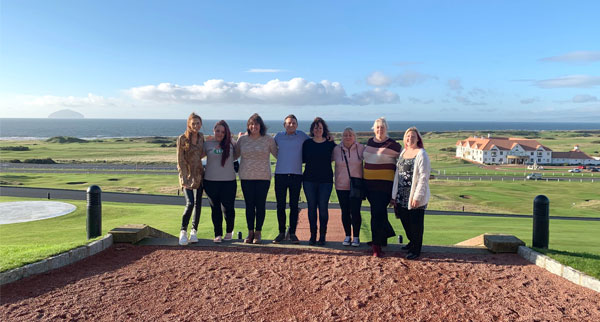 My golfing talent might not have been up to much, but as we head back inside for a whisky tasting, I’m on much more familiar ground – until expert taster Caroline tells us: “We’re talking about how to taste whisky, not drink whisky.” I think I’ve got a lot to learn, yet again.

There’s a trio of bottles lined up, filled with varying shades of caramel-coloured nectar. Under Caroline’s expert direction, we pick up the notes of almond and vanilla in the pale single-grain scotch from the Girvan distillery, get fired up by the smoky single malt from Ailsa Bay – a peated variety, unusual for the lowlands, and rather like drinking whisky over a bonfire, I can’t help but think – and then ease into the sweeter notes of the triple-distilled Auchentoshan.

The hotel can put on gin tastings, too, though whatever your poison, you’ll find it on the impressively stocked shelves of The Grand Tea Lounge & Bar, with its elegant atmosphere and huge, panoramic windows. Whatever the weather, it would be hard to find a better way to spend an evening than to sit back with a dram and stare out as the sun sets behind Ailsa Craig.

Book it:Osprey Holidays offers two nights’ half-board at the five-star Trump Turnberry, including flights from Stansted to Glasgow on October 8, from £399 per person.
ospreyholidays.com