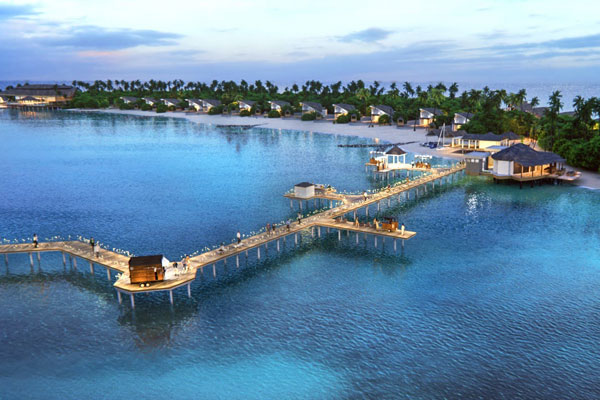 Laura French rounds up 10 of the best new resorts.

Talcum-powder sands, exotic palms and water so perfectly turquoise it looks drinkable – the Maldives is the stuff of dreams for many, and travellers are flocking there in their droves.

UK visitor arrivals were up 10.2% in 2018 compared with the previous year, and we’re now the country’s third-biggest market.

With that in mind, it comes as little surprise that new resorts are cropping up left, right and centre on the archipelago, with at least 18 scheduled to open this year alone – some at a relatively affordable price point, making it more widely accessible than ever.

Here are a few of the best recently opened or soon-to-open spots to look out for.

They’re all set on the beach, with panoramic views over the ocean, and come with a personal villa host who’ll arrange anything from private cinema screenings to astrology talks and night sky photography workshops.

It has three restaurants and a beach club, including standout spot Barium – where personal butlers serve tailor-made menus from a hidden chamber accessed by a secret door – and a translucent, overwater spa using water therapy and breathing techniques.

Diving, yacht sailing, jetskiing and flyboarding are among the activities available, and there’s a resident marine biologist on hand who can talk guests through the resort’s coral restoration projects and the local sea life, which includes turtles, spotted eagle rays and bannerfish.

“We’re really excited about this resort, as it’s so different from anything else that you’d see in the Maldives,” says Caribtours managing director Paul Cleary.

Book it: Caribtours offers a week at Lux North Male Atoll from £4,185 per person based on two adults sharing a Water Villa with Pool, including daily breakfast, flights, speedboat transfers and access to a UK airport lounge.
caribtours.co.uk 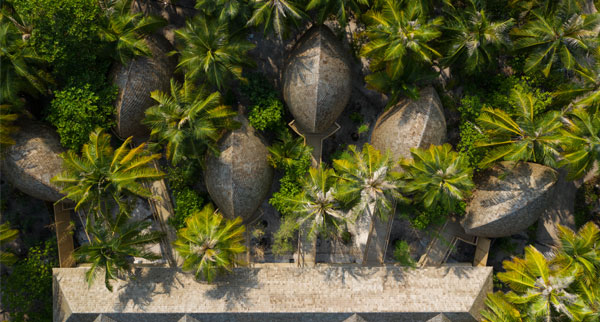 Minimalist design, trendy vibes and authentic cultural experiences are at the core of Faarufushi, which opened in March in the Maldives on the remote northern Raa Atoll.

Made up of 80 bungalows, villas and suites (some beachside, some overwater), it’s set on a snow-white beach and boasts a vibrant coral reef where turtles, eagle rays, sharks and schools of colourful fish greet divers and snorkellers.

There are five restaurants, from Maldivian to Mediterranean, but the highlight is the spa, set against a backdrop of tropical gardens and offering treatments that range from a Maldivian rose and coconut ritual to a multi-day Rejuvenate programme, all using organic ingredients.

Book it: Kuoni offers seven nights’ half-board at Faarufushi in a Beach Retreat With Pool from £3,199 per person, including Qatar Airways flights from Gatwick and transfers, on select dates in September and October.
kuoni.co.uk

It’s not only ultra-luxe properties opening up here; mid-range alternatives are making the Maldives increasingly accessible, and among the stars is the  176-room, all-inclusive Hotel Riu Palace Maldivas, opening on May 17.

Set on a white-sand beach, it features Junior Suites alongside exclusive overwater abodes with direct access to the striking blue, shallow lagoon below.

Several suites feature small, private pools, and there’s a shared infinity pool with a swim-up bar for those wanting to sip a cocktail without leaving the water.

But the real golden ticket is its proximity to the four-star Hotel Riu Atoll, set to open on the same date on the neighbouring island of Maafushi, with a family-friendly offering and more than 250 rooms. A bridge connects the two resorts, and guests at Riu Palace can use the facilities, which include three restaurants, water sports, a children’s pool, evening entertainment programme and a kids’ club.

Book it: Tui offers seven nights’ all-inclusive at the four-star Riu Palace Maldivas from £1,693 per person, based on two sharing, including flights from Heathrow on May 19 and transfers.
tui.co.uk 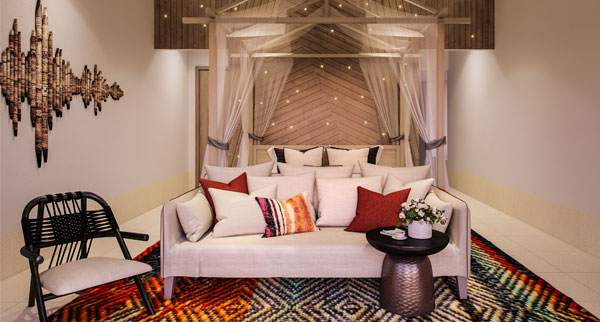 Elsewhere on the family front there’s Hard Rock Hotel Maldives, which is set to mark the brand’s first foray into the Indian Ocean when it opens in June at Crossroads – the new entertainment development that will see a 30-berth yacht marina, boutique shops, restaurants, a beach club, Maldives Discovery Centre, Watersports & Dive Centre and more pop up in Emboodhoo Lagoon over the course of this year.

Located a 15-minute speedboat ride from Malé airport, the Hard Rock will sit a stone’s throw from the marina, offering 178 rooms including family suites, beach villas and one and two-bedroom overwater villas.

There’ll be all the music-themed entertainment you’d expect from the brand, from the Rock Spa featuring sound-inspired treatments to The Sound of Your Stay music programme, which offers free use of Fender guitars and Crosley record players, plus kids’ and teens’ clubs, a host of rock memorabilia and a string of dining options ranging from Latin cuisine to signature American classics.

Book it: A night’s B&B starts at £348 for two people.
hardrockhotelmaldives.com

Also opening in June on the Crossroads complex is SAii Lagoon Maldives, Curio Collection by Hilton. Families, couples and groups of friends are all being targeted for this 198-room property (featuring rooms as well as beach and overwater villas), with interactive, personalised experiences that start on arrival, when guests get to choose a scent for their bathroom amenities from the hotel’s Aroma Lab.

Food options include Mediterranean and Thai, with a coffee shop and bakery on hand for those in need of a caffeine hit – not that they’ll need it with these views to keep them stimulated – and it’s a short stroll from the shops, restaurants and yacht club.

Book it: Rates start at £271 per room per night, including breakfast for two.
saiilagoonmaldives.com 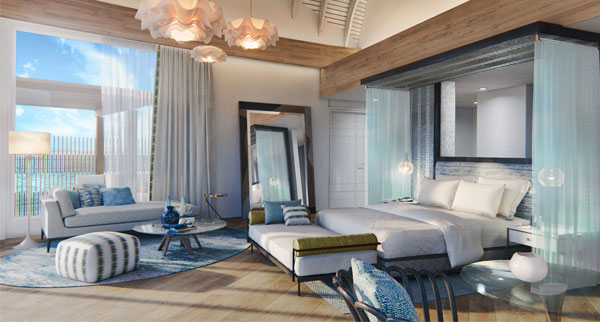 The family fun continues at JW Marriott’s latest addition, opening in July, with a turtle sanctuary, protected house reef and on-site marine biologist among its draws.

A kids’ club, tennis court and open-air cinema add appeal for youngsters, while an adult-only pool and club extend its reach to those wanting some quiet time.

There are 61 villas, each with its own pool, as well as three bars and a wine room. Five restaurants  include a treetop spot serving Thai cuisine, a Japanese teppanyaki bar hosting live cooking demos and a fine-dining, overwater eatery dishing up fresh seafood.

Those looking to push the boat out and get romantic can opt for a private dinner under the stars, while wellness fans will find an open-air yoga pavilion, overwater gym and spa among the offerings, all set on the peaceful island of Vagaru, 100 miles from Malé.

Book it: Nightly rates for an Overwater Sunrise Pool Villa start at $886, based on two sharing, including breakfast.
marriott.com

Over on the northwest edge of Malé Atoll, luxury Maldivian brand Atmosphere is launching Varu, featuring 108 beachfront and overwater villas.

The resort – opening in October – promises a focus on local culture and Maldivian traditions, in everything from the food to the furnishings, and there’ll be plenty going on for families wanting to do more than just flop on a beach. Highlights include snorkelling and diving on the reef – home to manta rays and more – plus a kids’ club, gym, Elena spa and watersports centre.

Guests stay on a Platinum Plus Plan, which includes food and drinks, in-villa services and excursions, and it’s easily accessible, at only a 40-minute speedboat ride from the airport.

Book it: Rates are yet to be confirmed.
varu-atmosphere.com 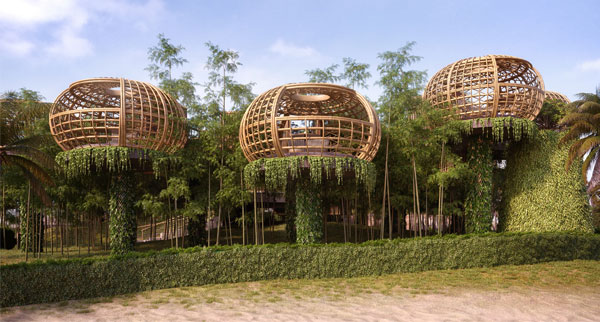 Spread out across three private islands, and a 30-minute speedboat ride from Malé, Waldorf Astoria’s first Maldivian outpost – opening on July 1 on the South Malé Atoll – delivers 122 beach, reef and overwater villas, each with its own private pool, Jacuzzi and lounge deck area (complete with dining gazebo, in-water lounge and outdoor shower).

It’s set to feature 11 restaurants – including a treetop dining experience, a Middle Eastern joint and a healthy, garden-to-table restaurant using ingredients from the resort’s herb garden – with secluded spots and peaceful, cerulean shores offering privacy for travellers after a serene escape.

Other key draws include a spa with overwater and garden treatment villas, a 40m beachfront Mirror Pool, and a watersports centre offering Padi dive courses. And for the ultimate in seclusion, there are two Stella Maris Ocean Villas, accessible only by boat and complete with their own private chefs.

Book it: From $2,600 per night based on two sharing a beach villa with pool, including breakfast.
waldorfastoriamaldives.com

From Muscat to the Maldives: A twin thing
8 of the best beaches for fly-and-flop
Budget-friendly Indian Ocean holidays