The Essex-based Travel Counsellors agent praises the professionalism of her fellow agents on their Cover Stars trip to Miami and the Bahamas.

Q. Why did you sign up for Cover Stars?
A. I was really excited when I found out I was going on the trip. I entered it as it was my 30th year as a travel agent, so I thought that it would be exciting to celebrate by going on the trip and getting on the cover of Travel Weekly. I knew a few people who had done it before and when I saw the entry form, I thought, ‘why not?’.

Q. What were your thoughts on NCL’s cruise offering?
A. I’d cruised before, but not on an NCL ship. I’d not even been on one for a ship visit. I loved the ship, there was a great atmosphere. The pools on the ship were lovely and the entertainment team put on some great events during the day, so you could sit and relax watching them, with a cocktail. There was a white party one night and a sail‑away party when we left Miami, which was good fun. The white party was on the deck by the pool and it was great to see everyone in white, dancing and having a good time. I was also very impressed with the food on the ship – it was of a very high standard. My favourite restaurant was Cagney’s Steakhouse. 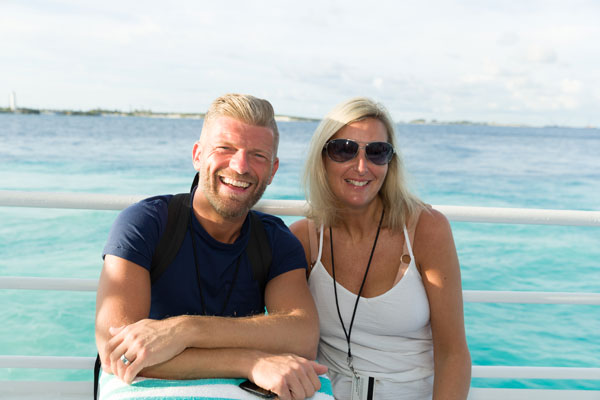 Q. Did you enjoy the excursions?
A. The excursions were really good. We stopped at NCL’s private island, Great Stirrup Cay, where we had our own private cabana. It gave us the chance to chill out and swim in the sea and even swim with pigs. At first it seemed a little odd to be standing in the sea and feeding the pigs with apples on skewers, but the pigs seemed really happy and I wouldn’t have done it if I’d thought they were mistreated. We visited Grand Bahama, which was my favourite ship excursion. We went on a brilliant coach tour which was hilarious and we even had time to relax on the beach. It was a good, fun atmosphere on the coach with all of the other passengers.

Q. Had you been to Miami or the Bahamas before?
A. I went to the Bahamas about 25 years ago, but just to Nassau, so it was nice to see other islands. I’d also been to Miami before and we had a great time there. We stayed at the Eden Roc Hotel, which had an old-school glam style to it. It’s a lovely hotel, right on the beach. In Miami we were fortunate to go to South Beach and have cocktails and take some photos on the beach. I don’t sell a lot of cruises, but this has made me realise how easy it is to add a three or four-night cruise to the Bahamas on to a Florida trip. 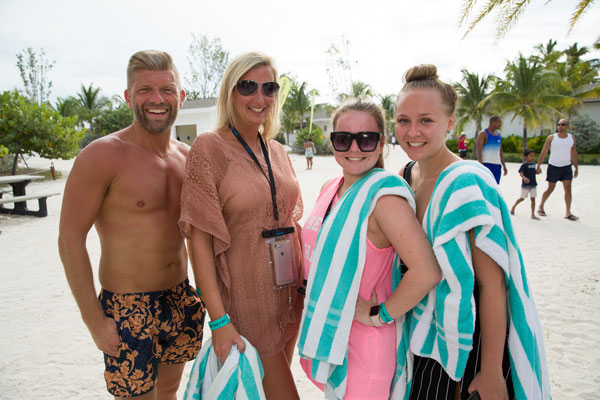 Q. What’s your favourite thing about fam trips?
A. The best part of this trip for me was probably meeting all of the other agents. It was such a lovely bunch of people. There were four young girls aged 18 to 21 who were so professional and really enjoyed every minute of the trip and were credits to the agencies they worked for. It’s refreshing to meet people like that, and they were lovely.

Q. How was the photoshoot?
A. My photoshoot was at the Grand Hyatt Baha Mar in Nassau. Everyone else went on to do a tour but we went to the hotel where I had my photoshoot in a luxury suite overlooking the sea. It was a fun experience and I think Steve, the photographer, took about 50 shots or more. I made him take lots of photos until there was one I was happy with. I’m very critical of myself, but Steve made me feel really at ease and it was a good experience. 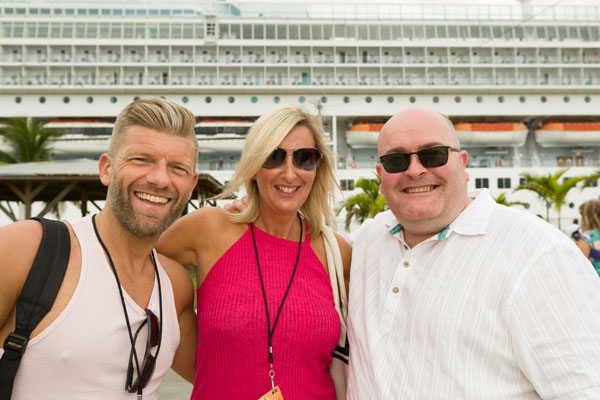 Q. How were the flights?
A. The flights were really good. We flew out with British Airways to Miami and we had great seats at the back of the plane. Thanks to the seat configuration, economy felt more like premium economy. We flew back in premium economy and it was so comfortable that I slept the whole way back to Heathrow.

After that, I went back part-time, but I was soon made redundant, which is when I joined Travel Counsellors, nine years ago. The redundancy was a blessing really as it made me look for something else. I love working from home, and it was useful when my children were young.

I don’t think I’d go back to high street retail. I love the flexibility and I never miss a sports day or a nativity play. When you work hard you can build your own client base and make more money.