The city is the springboard to a bigger and better South African experience, writes Jo Cooke.

South Africa’s third-largest city is stepping out of the shadow of her two big sisters, Cape Town and Jo’burg. That pair have long had direct services from the UK, and carved out their tourism niches, but now Durban is getting in on the act with British Airways’ launch of the only non-stop link with Europe last October.

The new route makes it even easier to access Durban’s mix of sand and sea, plus adrenaline-pumping activity and fascinating history, with wildlife, mountains and more in easy reach.

Here are a few of the highlights you could sell to clients ­looking for a different side of South Africa. 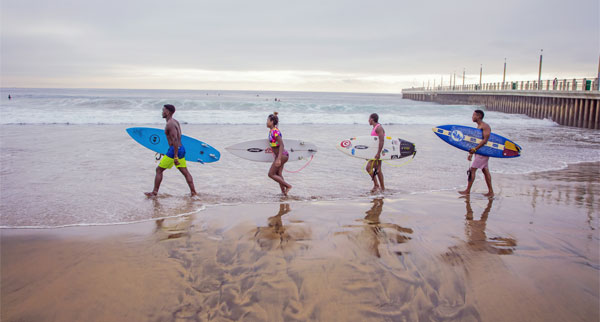 Moses Mabhida Stadium: Built for the 2010 World Cup, the stadium, with its signature ‘arch of triumph’ rooftop, is now the stage for a multitude of sporting and cultural events, plus the Big Rush. This attraction, both a rope swing and a bungee jump, involves climbing 352 stairs to the rafters, descending a ladder, then crab-walking onto the launch platform, before simply putting one foot in front of the other to step off into thin air. It’s a four-second freefall before the harness engages and you swing like a pendulum back and forth above the arena on what is the tallest stadium swing in the world.

Victoria Street Market: If South Africa is the rainbow nation, this is where you’ll find all its colours. Stalls of bright costume jewellery, fabric in striking patterns, wood carvings and exotic fruit and veg stacked high like an art installation sit side by side with tables of spice.

Golden Mile: Aside from its subtropical climate, perhaps Durban’s biggest selling point is its Golden Mile. Despite the name, this promenade runs for five miles along the broad sandy beach, past parks and ­playgrounds, picnic spots and paddling pools, ­volleyball pitches and cafes. Tour it on foot, Segway, rental bike or even on a rickshaw decked out like a mini carnival float. It’s also surf central: the warm waters of the Indian Ocean, hollow beach breaks and shark nets ensure there are always plenty of boards out when the surf’s up. 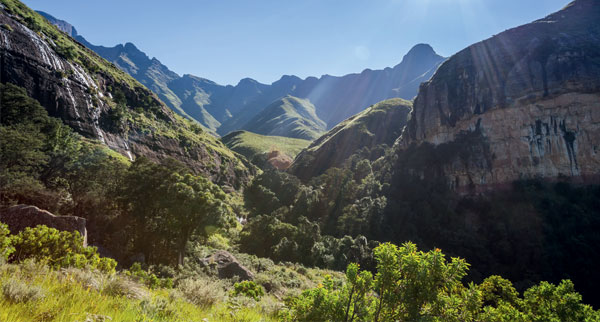 Valley of a Thousand Hills: Leaving the city limits, you quickly reach the Valley of a Thousand Hills. Whether bathed in sunshine or semi-concealed by mist, this is a sparsely populated, ever-green canvas that rises and dips into the distance. It’s also where you can get a taste of Zulu life. We stopped at PheZulu Safari Parkand sat in a circle inside a traditional thatched hut listening to ­anecdotes and traditional tales while a flask of local brew was passed around. A raucous music and dance show ­followed, recounting a tale of romance and cattle.

Drakensberg Mountains: The Drakensberg Mountains are around two and a half hours from Durban. This ­divine range stretches for more than 100 miles and lends itself to ­hiking, mountain biking, ziplining, abseiling and ­tubing, all offered at Dragon Peaks Mountain Resort. 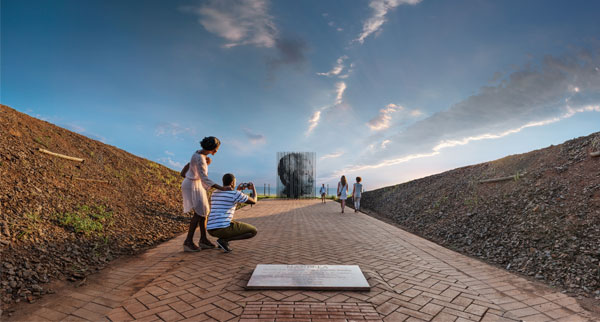 As if Drakensberg’s visual splendour wasn’t enough to give you a spiritual high, there’s a choir of angels tucked away up here too. Drakensberg Boys Choir  performs in the school theatre on most Wednesdays. Starting with a classical repertoire, the show takes a contemporary twist in the second act. “It’s not just singing – it blows your mind,” says Helen Austin, senior product executive for touring at Kuoni.

Howick: Just beyond Pietermaritzburg, Howick is home to two big-hitters. The first is its waterfall, which ­plummets 94 metres, making it the fourth-largest in South Africa. The second is the Nelson Mandela Capture Site, located at the turn in the road where the former president was arrested in 1962, now marked by an exhibition and sculpture. The dirt path leading to the artwork is flagged by rusted milestones recounting key moments in Mandela’s life. From a distance the sculpture resembles a collection of upright black matchsticks, but as you get closer it transforms into the face of the man who became a worldwide inspiration.

Fairmont Zimbali Resort: Those who like to escape the hubbub might opt for the 154-room, oceanside Fairmont Zimbali Resort, 30 minutes north of Durban. “It’s relaxing and luxurious and the rooms are really large,” says Christie Hill, ­destination executive at Hayes & Jarvis. The property has a spa, tennis court, golf and five outdoor pools.

Suncoast Towers: A simply furnished property with slightly faded art deco glamour, the 165-room Suncoast Towers is located on the Golden Mile, close to Moses Mabhida Stadium. ­Hotel restaurant Jeera serves award-winning bunny chow, a creation of the city’s Indian population, made up of a small, hollowed-out loaf of white bread filled to the brim with butter chicken, mutton or veggie curry. 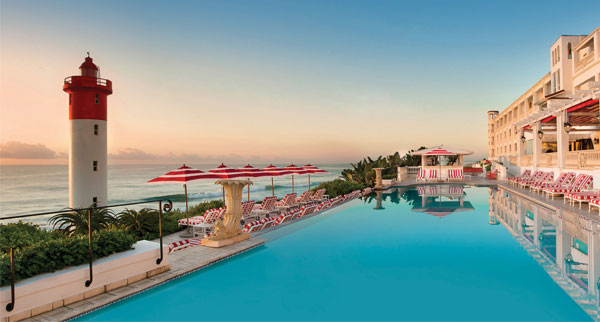 Oyster Box: Iconic, sophisticated, elegant – there are plenty of adjectives you could assign to the famous Oyster Box. Attention to detail and impeccable service come as standard at this 86-room grande dame, opposite the lighthouse in Umhlanga, 20 minutes north of Durban. Julia O’Connor, ­marketing manager at African Pride, says: “The Oyster Box is a perennial favourite with clients. The curry buffet is ­excellent, the breakfast one of the best we’ve found, and the resort’s shops are just a stroll away.”

Dragon Peaks: If getting stuck in to the great outdoors is more your clients’ ticket, Dragon Peaks Mountain Resort has 40 self-catering chalets. “Most of our self-drives are for four to six people and we’re often asked to get one unit, which can be a ­struggle, but these cottages sleep up to 12,” says Murray Chalibamba, Africa product manager for Travelpack.

African Pride offers a seven-night Safari, Battlefield and Beach itinerary in KwaZulu-Natal, from £2,025 per person based on two sharing. The price includes car hire and direct return BA flights to Durban from Heathrow.
african-pride.co.uk

Travelpack offers a 14-day self-drive with four nights in the Drakensberg, three in Nambiti Private Game Reserve, two overlooking Mount Isandlwana and ending with four nights in Durban, from £2,689 per person based on two sharing a double/twin room plus car rental and return direct flights to Durban with BA. travelpack.com

Christie Hill, destination executive, Hayes & Jarvis: “These new flights open up lots more options, and that in itself can increase sales.”

Murray Chalibamba, Africa product manager, Travelpack: “This flight enables you to have a safari and beach holiday in Durban then head on to Cape Town, and fly BA back to London from there.”

Helen Austin, senior product executive for touring, Kuoni: “The Durban flights reduce journey time to Drakensberg, and from Umhlanga clients can easily access the battlefields of Isandlwana and Rorke’s Drift.”