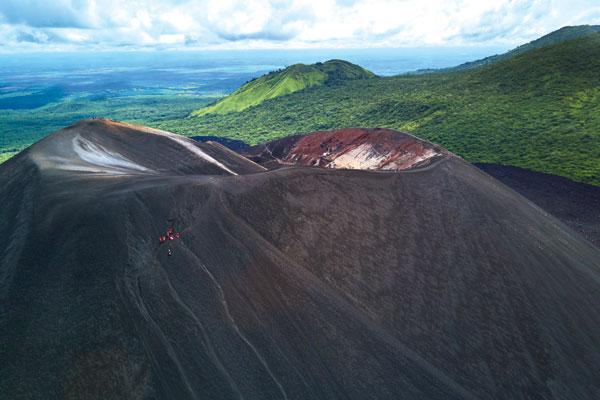 Teetering at the top of the coal-black slopes of Cerro Negro, with nothing but a simple wooden sled between me and the sheer incline ahead, my resolve started to waver.

Sandboarding down the side of an active volcano sounded a bit too James Bond for me – I don’t even like driving too fast – yet I’d been assured it’s one of Nicaragua’s most popular day trips, and that many visitors couldn’t be wrong, could they?

Swallowing my nerves, I grabbed a firm hold of the handles, leant back and set off, skimming over the fine, powdery ash and gathering speed as I went.

I also gathered an alarming amount of volcanic debris on top of the board – I think my sandboarding technique leaves a little to be desired – but still managed to skid to a stop at the base with a cheer from my fellow fam-trippers. 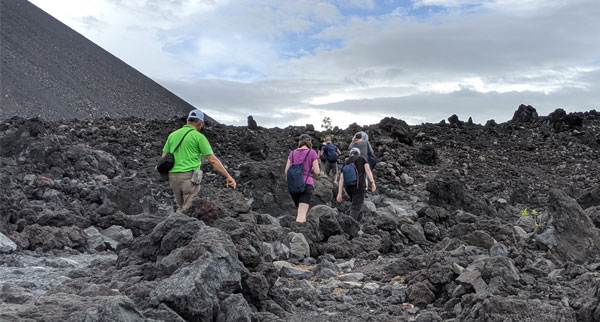 Speeding down was quite the thrill, but the hike up had proved just as exciting – albeit with more time to pause and admire the scenery. We had scrabbled up its steep sides, past boulders balancing improbably against the sharp gradient, boots crunching the petrified lava below, and a kaleidoscope of colour unfolding around us: lush green plains to one side, soft grey ash underfoot, and jet-black slopes peppered with splashes of iron red and sulphur yellow to the other.

Every turn revealed another new view of this other-worldly landscape, its smooth hillsides pockmarked by eruptions that took place not hundreds or thousands of years ago, but mere decades. Our guide pointed to a crater that exploded out of an unsuspecting farmer’s field in the mid-90s, to the still-smoking peak of neighbouring volcano San Cristóbal, and to the ground underfoot which, when you dig just an inch or so below the surface, is too hot to touch.

It’s easy to see why Nicaragua’s indigenous population and 16th-century Spanish colonisers imbued its long chain of volcanoes with tales of gods and witches – one Spanish priest dubbed nearby Masaya volcano ‘the mouth of hell’. Even now, with the benefit of science, they still define the landscape and inspire a sense of awe, showing why Nicaragua has earned its moniker as ‘the land of lakes and volcanoes’.

Yet it wasn’t Nicaragua’s natural beauty that brought it to the world’s attention last year; rather the outbreak of violent protests against president Daniel Ortega and subsequent Foreign Office ban on all but essential travel, imposed in April 2018. That advisory was lifted in February, and a group of UK operators joined a Latin American Travel Association fam trip to find out how the country’s tourism industry is recovering.

Cerro Negro is just a baby volcano compared with some of the country’s towering peaks, each of which offers a different experience.

Masaya, Nicaragua’s first national park, is one of only a handful of active volcanoes in the world where you can drive right up to the mouth and peer in – no hiking required! Visitors arrive to find smoke and steam belching out of the vast crater, but as it clears, they can lean over the edge (not too far, mind) and see the molten magma writhing below. Visit at night, when the colours are at their brightest, and they might wonder whether ‘the mouth of hell’ label was really so far off.

At nearby Mombacho volcano, there’s no fiery pit offering a dramatic wow factor, but a hike high above the cloud forest offers rewards of a different, subtler kind. Recommend clients drive up as far as the visitor centre (it’s possible to walk, but they might as well save their energy for the main draw), from where they can opt for walking routes of between one and four hours.

Along the way, they might spot howler and spider monkeys, sloths and salamanders, as well as a dazzling array of orchids, begonias, bromeliads and bird life, not to mention smoking fumaroles and – on a clear day – sweeping views.

This isn’t a box-ticking exercise, though; it’s about spending time in the mist-filled air of the cloud forest, with no other sound but the squelching of leaves underfoot and the occasional call of a bird rustling in the trees to appreciate the quiet beauty of Nicaraguan nature.

With so many untouched landscapes to explore – and that’s before you even get to the peaceful surroundings of Ometepe, an island in Lake Nicaragua, or the wildlife-filled jungles of Rio San Juan – you might wonder whether the cities are worth visiting, but they most certainly are.

While capital Managua is somewhat underwhelming – its most interesting features were destroyed by earthquakes in 1931 and 1972 – the rival colonial cities of Granada and León merit more attention.

Granada, founded in 1524, has all the fading grandeur of a once-thriving capital city, with its rainbow-coloured houses, wrought iron balconies, grand architecture and lavish cathedral telling of its past as a wealthy port and a centre of Spanish trade. 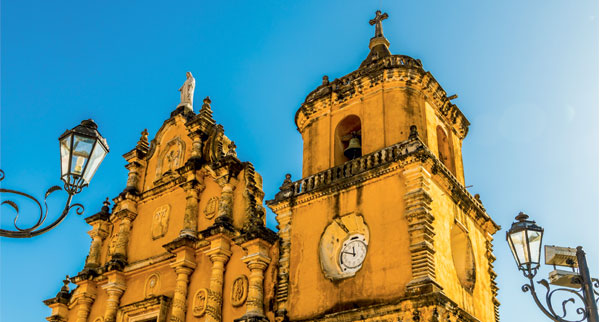 Nowadays, it attracts expats and young Nicaraguans, drawn here for its youthful vibe and trendy restaurant scene, though you’ll still see headscarf-wearing women sitting on their front steps chatting to neighbours and men gathering in the main square to set the world to rights.

León offers an altogether less-polished feel, with peeling paintwork and posters declaring ‘Welcome to León, the capital of the revolution’ just the first signs of its edgier, more liberal leanings. Look out for the biggest cathedral in Central America, which took 103 years to build and still has its original altar – saved from a pirate raid, no less – then climb to the top of its tower for a view over the city. But those are just the warm-up acts for this university city’s nightlife, where the strains of salsa music flow from one bar to the next and local rum Flor de Caña is ordered by the bottle, not the glass.

There’s no doubt Nicaragua has seen its share of troubles over recent years, but with its compelling mix of culture, history, wild landscapes and edge-of-the-seat adventures, it’s most definitely a country on the up.

“I was completely blown over by how welcoming the Nicaraguans are; nothing was too much trouble and they went out of their way to make sure we were well looked after. A highlight for me was Isla Ometepe, a tranquil island formed by two volcanoes rising out of Lake Nicaragua. The lush jungle is home to monkeys and tropical birds; there are ancient petroglyphs and waterfalls to hike to; or you can climb the volcanoes for the finest views in the country.”
Chris Rendell-Dunn, travel consultant, Journey Latin America

“Jicaro Island Lodge, a hidden gem just off Granada, stood out for me. For many travellers, Ometepe would be the highlight of Lake Nicaragua, but Jicaro and the surrounding small islands are missed from the guidebooks. It felt like our own private area in the middle of nowhere. If you’re looking for an authentic experience, it doesn’t come better than that.”
Trehan Francis, long-haul customer operations manager, Exodus Travels 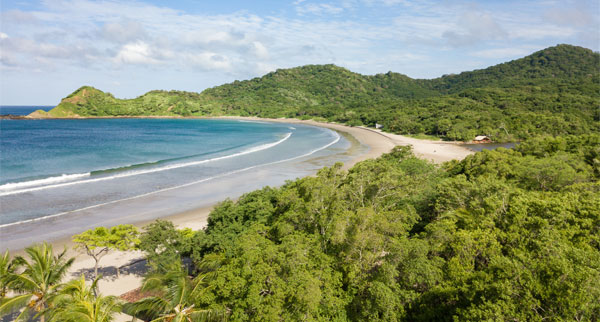 Nicaragua’s Caribbean coastline is a great spot to wind down after a tour, with clear waters, palm-fringed beaches and a cool Creole culture to rival any island in the region. We headed to the Corn Islands, an hour by small aircraft from Managua, with a further – somewhat bumpy – boat ride for clients who want to swap the better-value Big Corn for the seclusion of Little Corn island. On the latter, Yemaya resort offers spacious, comfortable rooms right on the beach, with snorkelling, sailing and stand-up paddleboarding among the activities on offer.

Morgan’s Rock: If clients are looking for eco-chic, this is the place to send them. The sprawling resort is set in the heart of the jungle, surrounded by 4,000 acres of mahogany and spring cedar trees and edged by a mile-long beach that feels like something out of Robinson Crusoe. Yet the setting is only half the story – with no fourth wall, villas and bungalows combine a back-to-nature vibe with sophisticated style. Book it: Rooms from $463 per night including tax. morgansrock.com

Jicaro Island Lodge: As a member of the National Geographic Unique Lodges of the World collection, you’d expect Jicaro to have something special about it, but this private island resort – just a short boat ride from Granada – surpasses even the highest expectations. With just nine ‘casitas’ and superbly attentive staff, it’s a truly exclusive experience, with top-notch dining and tours. Book it: Rates start at £287 per night including all meals, non-alcoholic drinks, boat transfers and daily yoga.
jicarolodge.com

Exploring the wilderness in the Pantanal, Brazil
Walking holidays for over-50s
Off the beaten track in Chile