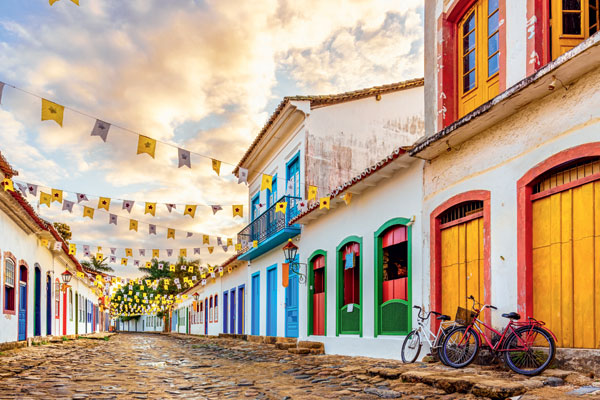 As I stand listening to the strum of a guitar faint in the distance, evening lights bouncing off the wet glossy cobbles, I try to picture how this charming, now-touristic coastal town – Paraty, four hours’ drive from Rio – might have looked a century ago.

It had swung from boom to bust for more than 250 years, rising to fame as one of Brazil’s biggest ports during the 18th-century gold rush – when gold from the mines in Minas Gerais was transported here to be shipped to Portugal – and later as a hotspot for cachaca (white rum) and coffee.

But when a railway direct from the valley to Rio was built, that all changed, leading to a mass exodus and cutting the town off for almost 90 years. It wasn’t until the 1970s, when a new highway connecting the north of the country to the south was built, that visitors from Brazil and farther afield started to flow back. 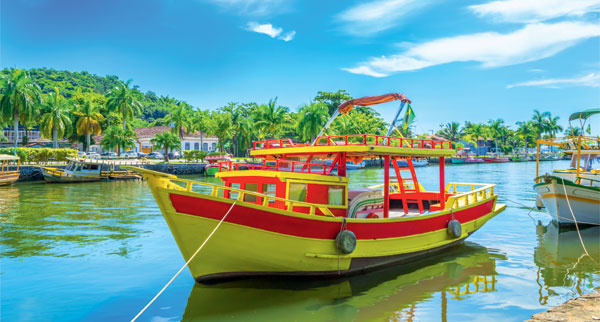 Today, its whitewashed colonial buildings and centuries-old churches – several of them built in Portuguese yellow stone, originally brought over by colonisers in exchange for gold – have been restored, framing narrow streets where horse-drawn carriages amble alongside artisans selling handmade baskets and other colourful crafts.

The historic centre – listed as a Unesco World Heritage Site – is pedestrianised, making strolls along its cobbles especially serene. Little bookstores, art studios and cachaca shops line its main alleys in rows of immaculate white, their door frames gleaming out in shocks of lemon and teal, blue and rose. Masonic symbols adorn several of its houses, harking back to the 18th century, when Freemasons came seeking liberal thought in this then-tiny fishing village.

There’s plenty to see here, not least the colossal First Church of Our Lady of the Remedies, which soars above the water with its whitewashed facade and honey-coloured beams, and the Capela de Santa Rita, built in 1722 for emancipated slaves, and now sprouting up in a rustic block of white, yellow and green. It’s all especially magical at high tide, when water rushes into the streets, flooding them in a reflective, shimmering pool that people criss-cross on makeshift bridges.

But it’s at night that things really liven up, with locals and visitors flocking to the main square for live samba music and dancing, and several of its restaurants packing out with daily performers. My favourite spot was Paraty 33, where acoustic musicians plucked among wobbly tables and old memorabilia, while seafood and steak dishes were served with a warm, friendly welcome that became a regular fixture in my stay here.

Paraty’s charm isn’t just in its culture and architecture, though; it’s just as rich on the nature front, with green mountains on one side and opal-blue sea on the other.

More than 65 islands pepper its surrounding waters, making it a hotspot for swimming, diving and snorkelling, and the best way of exploring them is by boat. Colourful schooners in pink, yellow and green bob up and down at the port waiting to take people out to do exactly that, and it’s a must for any visitor here.

I hopped on a speedboat with Paraty Tours and found myself whizzing along the waves, wind whipping my face, body bouncing off the seat, to reach the Saco do Mamanguá fjords – a collection of tree-covered isles and hump-shaped hills rising above an expanse of calm water.

Stopping at several of its beaches, umbrella-like palms overhead, verdant mountains all around, I felt a little like Jack Sparrow stumbling upon some undiscovered territory, and it was bliss; a half-day trip costs from £30, departing from the port. 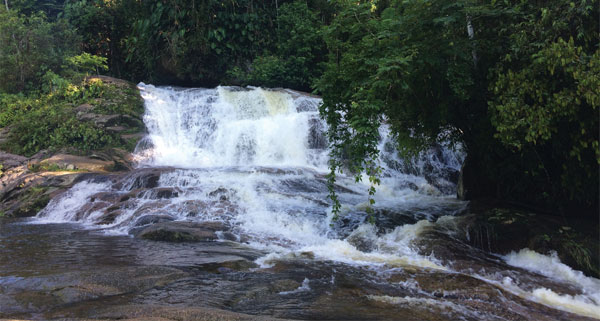 But perhaps Paraty’s crowning glory is its proximity to the Serra da Bocaina National Park, part of the Mata Atlântica (Atlantic rainforest) which stretches along Brazil’s Atlantic coast. White, crashing waterfalls, green-carpeted forest and sprawling open hills form the backdrop for a host of exotic wildlife here – swinging spider monkeys, jet-black jaguars and brightly coloured birds, to name but a few – and it’s easily accessible at less than half an hour’s drive from the town.

The best way of seeing it all is by 4×4. Paraty Tours offers a six-hour trip (from £20), taking you to several spots. They include the Toboga waterfall, where a frothing stream of white crashes down giant, champagne-hued rocks, and two rural distilleries, which produce various types of cachaca including Gabriela, a honey-sweet variety unique to the area, infused with cinnamon and clove.

But the real highlight for me was visiting a section of the Caminho do Ouro, a stone-paved, 745‑mile ‘Gold Trail’, built by African slaves in the 18th century to carry gold from the mines to Rio de Janeiro and Sao Paulo.

Glimpsing its collection of pebbles, now embalmed with lime-green mosses and weeds, took me back to thinking how things might have looked in former times, when workers transporting gold would have traversed its endless, winding miles in circumstances that are hard to imagine.

Like the town itself, the Caminho do Ouro felt both changed yet frozen-in-time, preserved yet different, providing a snapshot of the region’s turbulent history.

Visitors to Rio may never have heard of secluded Paraty. But I’d urge anyone with a spare few days to come and wander its charming, sleepy streets and vast, lush-green trails – not least to learn more about the forces that have shaped the landscape of Brazil as a whole, and to uncover the stories they might never otherwise know about. 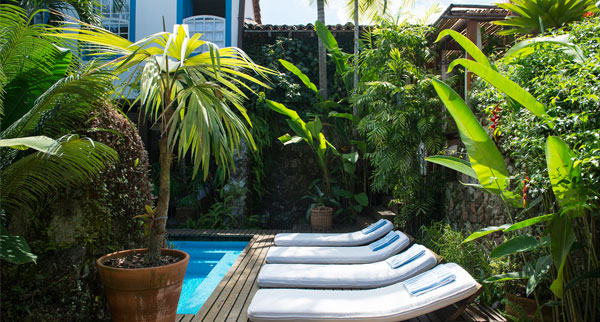 Named after its colourful, perfectly preserved facade – all bright white stone and pretty turquoise framing – this luxury pousada is designed like a home from home, with a friendly, family-run feel. Owner Tetê goes out of her way to make you feel welcome, with homemade cakes every afternoon and special touches such as a complimentary book containing her favourite recipes. The nine suites are beautiful and spacious, with traditional fittings and immaculate white furnishings. There’s a small, peaceful pool outside, and the location is excellent, with the main streets and plaza a few minutes’ walk away. It has a reputation as one of the best guesthouses in town, and for very good reason.

Book it: Rates for a luxury suite start at £300 per night (plus tax), including daily breakfast and afternoon tea.
casaturquesa.com.b