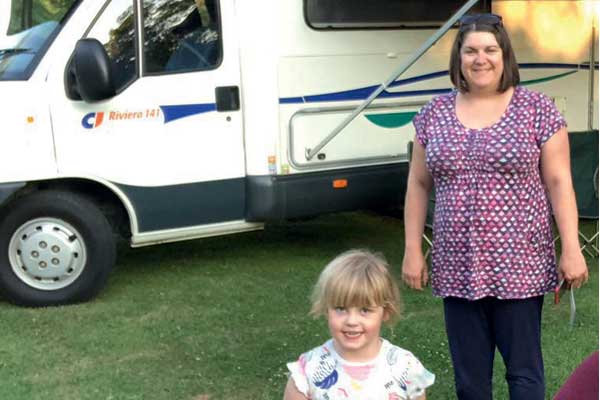 Emma Summerill joined the travel industry last year as a Not Just Travel homeworker. She tells Harry Kemble about selling holidays on the move and hosting customers on a cruise.

Q. Why did you join Not Just Travel?
A. I decided to join Not Just Travel because I wanted a bit more financial independence. Before that, I wasn’t working in the travel industry. My degree was in geography, and in 2001, I became a teacher for a year. Then I worked as a careers adviser, advocacy manager and a helpline manager – all public-sector jobs.

Q. How do you look back on your first year as a homeworker?
A. It’s been brilliant. It has been everything I could have wanted and more. When a lot of people change career and enter a new industry, they have negative experiences – but I didn’t. Everyone has been so supportive, plus I’m old enough to brush any negativity aside. It’s certainly easier if you have that support. In the first six weeks, I don’t think I have ever worked so hard in my life – I don’t think I slept or ate! But I’ve had a lot of people that wanted to book holidays from me.

Confirming my first booking was scary, but I was confident because I’d been there three or four times before.

Q. Tell us about the first booking you made
A. My daughter Harriet has a complex heart condition – pulmonary atresia – and my first booking was for a friend of mine whose daughter has a similar condition. The booking was to Disneyland Paris for three people. Confirming the booking was scary, but I was confident because I’d been there three or four times before. So when I pressed the button, I knew it was going to be OK.

Q. How did your client base evolve in those first few months?
A. Initially, it was a lot of people that I knew. But over time, I was getting more referrals and more traction from people that I didn’t know. I do a lot of networking events for women or mums in business. I tend to do two each week. The two main networking events I do are BizMums and Mums In Business Association, which are both national events. My network is growing massively and I am meeting so many new people. I have now even started to meet people that know my other clients. A quarter of my bookings are Disney, a quarter are cruise and the rest are everything else.

The two main networking events I do are BizMums and Mums In Business Association, which are both national events.

Q. As a homeworker, do you do many bookings on the move?
A. We have a campervan called ‘Colin’, which was the name given to it by its previous owner. It’s my mobile office when we’re on holiday, while my husband Leighton drives. It’s one of the weirdest places I have made a booking. We go everywhere in Colin. We drive mainly to places in the south of England and the Midlands, but we also took the campervan to Disneyland Paris in December. The journey took us the best part of two days.

Q. What do you think appeals to customers about booking through a homeworker?
A. I met someone the other week who said he did not want to go into a travel agency. He wanted a complicated Asia itinerary that was very much out of his comfort zone. He came to me because he thought I was going to have more experience and would be able to fulfil his requirements. I’ve done more Asia bookings in the past four months, so once more people see that, hopefully business will continue to grow.

It’s so important to use your network because you can bounce ideas off each other and get that support.

Q. How do you utilise the network of fellow Not Just Travel agents?
A. The people I regularly speak to are those homeworkers who I did my initial Not Just Travel training with in Bournemouth. There were 10 of us on the week-long course. I know a lot of the franchisees in South Wales and we help each other out. People will message me about Disney [products] and I will contact colleagues about the Caribbean. If you don’t use your network, you are missing out. It’s so important because you can bounce ideas off each other and get that support. It would be very lonely if you did not have any support.

Emma invites clients to ‘cruise with me’

I get a lot of enquiries for cruising and most of them are from first-time cruisers. As a family, we often take a cruise for our holiday. When we booked a sailing on [P&O Cruises ship] Iona for August 1, 2020, quite a few friends and family asked about it. So I decided to invite my customers. Four of our group of 20 I haven’t met and the rest are people that I know as customers.

I think people are generally becoming more switched on to the idea of cruising, but are confused by all the options. Some are scared to be stuck on a ship for a week, in case they hate it. I am calling the concept ‘Cruise with Me’. We have booked a second sailing that we are also inviting customers on. It is a cruise on [P&O Cruises ship] Britannia on April 16, 2021.

Of the seven customers that are coming with us, I know four people, but the other three I don’t know. Cruising is perfect for us as a family. It is the most relaxed holiday that we go on and allows us to visit so many more places.