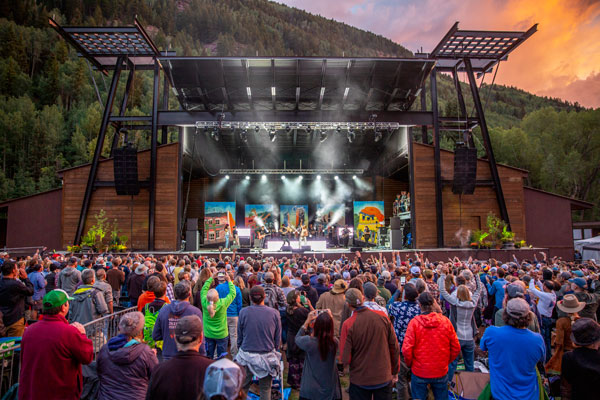 Thought Colorado was just about skiing? Laura French sees another side on a music-themed trip through this scenic mountain state.

“This is one of my favourite places to perform,” says Veronica Swift, a 25-year-old jazz singer from New York who’s spent the past year touring the world, as she gears up to go on stage.

“I first performed here when I was 10, and I came back nearly every year throughout my childhood,” she tells me. “It’s the scenery – the mountains, the sentimental value. It holds a special place.”

I’m at Telluride Jazz Festival, an intimate, three-day celebration of all things jazz that takes place in this tiny mountain resort every August, 2,600m high in Colorado’s Rocky Mountains.

“Aspen trees shoot up in tufts of yellow, lakes glow out like huge reflective pools, and clouds hang like puffs of cotton wool.”

It’s certainly a memorable setting. The stage sits in the middle of a bright green
field, sandwiched between rainbow-coloured mountains swirled with green, purple, beige and copper. Aspen trees shoot up in tufts of yellow, lakes glow out like huge reflective pools, and clouds hang like puffs of cotton wool against a perfect blue sky.

It’s movie-set material, and I’m soon dancing among the crowd – a mix of young, long-haired hippy types in tie-dye tops, and older cowboy-hatted locals picnicking on blankets – as the sky turns a deep, burning pink and the peaks glimmer a bright orange-gold beneath the setting sun.

Welcome to Colorado; the sprawling, active mountain state which, I soon discover, has a music scene to rival that of the Deep South, and plenty of extraordinary mountain backdrops to accompany it. 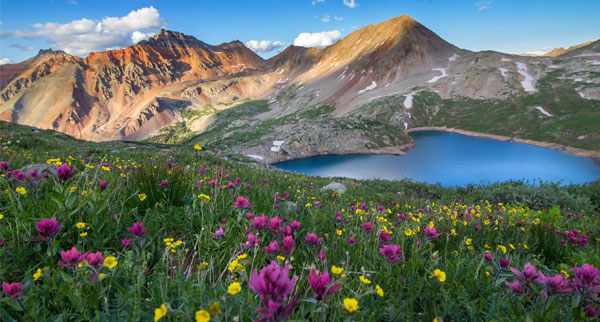 While I’d come to Telluride to experience the Jazz Festival, I soon learnt it wasn’t the only event happening over the coming weeks. In summer, this laid-back, liberal mountain town – once a hub for silver mining, now an exclusive ski resort where the likes of Tom Cruise and Oprah Winfrey have homes – transforms into a cultural extravaganza almost every weekend.

Among its biggest celebrations is the four-day Bluegrass Festival, which takes place in June and attracts up to 15,000 people daily. Others include rock ’n’ roll-themed The Ride Festival, the much-talked-about Mushroom Festival, and Blues and Brews, which happens in September and has seen everyone from James Brown to BB King grace its stage.

“In the late 1960s and 1970s, this defunct mining town saw an influx of hippies and returning Vietnam war veterans,” explains Peter Bell, executive director of the Telluride Society for Jazz. “They wanted to create this nice, free culture in Telluride. But they didn’t want to be cut off from the world’s culture, so the festivals started as a way of having a steady run of culture coming in.”

“Telluride is something of a dream for hikers and mountain bikers in summer.”

Roll on 47 years (the Bluegrass Festival began in 1973) and those festivals are clearly still going strong, with bands from across the country taking to the fairytale-setting stage each year. Grammy-nominated funk bands Lettuce and Cha Wa were among the headliners on our lineup, getting the crowds jumping as darkness fell.

But it’s not just the music that appeals here. Telluride is something of a dream for hikers and mountain bikers in summer, and between bopping along to the swinging sounds of the sax, I found myself exploring a network of trails to admire pine-covered slopes plunging into valleys, and glassy lakes glowing out in shocks of electric-blue. Gondolas whisked us between the trails as alpine-like panoramas unfolded below; on one occasion, we spotted a black bear skulking along the paths, a tiny black dot on a patchwork of greens that seemed to spread on into infinity, and it was truly memorable. 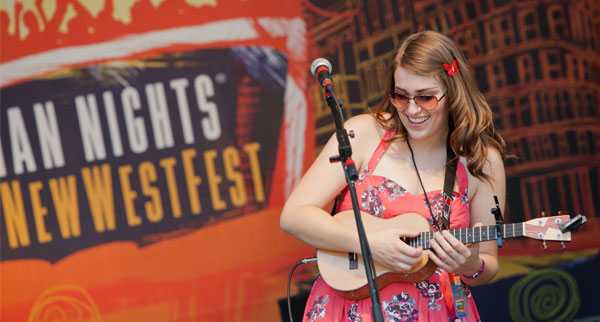 It wasn’t just Telluride that dealt us its share of music and culture, though. We’d spent the previous night in Fort Collins, a charming Wild West-feel university town, located an hour’s drive north of Denver, where Western-style saloons, dusty antique stores and leather-strewn cowboy shops line one main street.

You can catch live bands pretty much every night of the week here, but it’s in August that it comes into its own, in the form of Bohemian Nights – a free, three-day festival funded by a local foundation that draws free-spirited types from Denver and beyond with rock, reggae, funk and other bands performing on outdoor stages scattered across Downtown.

“There was a tangible sense of excitement, and I felt as if I was seeing this charming, properly American town at its most quintessential.”

We headed for the main attraction, Mountain Avenue Stage, to see a slew of locally renowned funk bands (including the aforementioned Lettuce) rock out to a small, outdoor arena full of eclectic fans, before filing out on to the streets to continue the party among throngs of revellers. There was a tangible sense of excitement, and I felt as if I was seeing this charming, properly American town at its most quintessential. 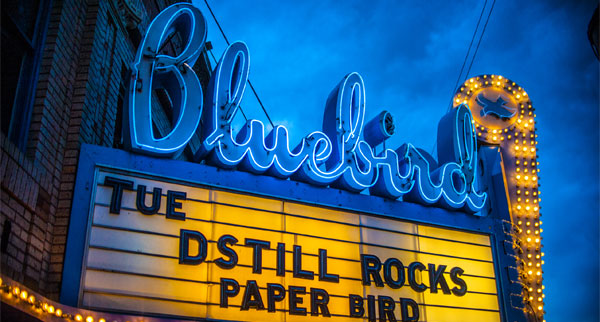 But it was Denver – home of The Lumineers and The Fray, among other international names – that really shone out on the music front.

From live-music bars such as locally renowned Ophelia’s Electric Soapbox – once a brothel, now a trendy cocktail lounge – to cinema-turned-concert-venue Bluebird Theater, Colorado’s capital could easily rival Nashville when it comes to its number of music venues. You’ll find intimate gig spots scattered across the city (especially around the trendy LoDo area), which is underpinned by a liberal, creative vibe that nurtures local talent.

“Some of the biggest names in the history of music have played here, including the Beatles, Jimi Hendrix, U2, Elton John and Daft Punk.”

By far its most unusual spot is Red Rocks Amphitheatre – the open-air, 9,000-capacity venue built into the rocks about half an hour out of the city, where long, wooden rows of seats rise in tiers above the stage.

Some of the biggest names in the history of music have played here, including the Beatles, Jimi Hendrix, U2, Elton John and Daft Punk (there’s a fascinating ‘hall of fame’ museum inside where visitors can see the full list), and it didn’t take me long to see why. 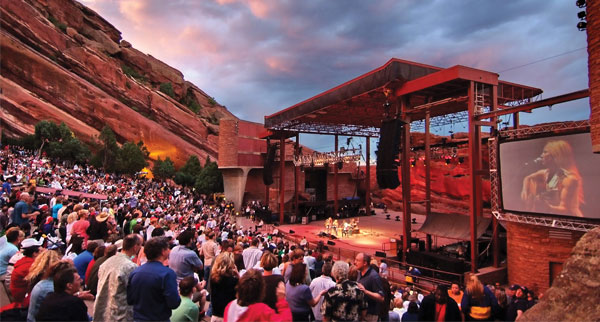 The setting is phenomenal; two ginormous monoliths poke up on either side, coloured a deep, desert red and carved with strips of purple, yellow and orange. Behind the stage, layers of mountains sprawl on and on, and in the distance you can just about see Denver, a cluster of silhouetted buildings set against a clear blue sky.

But it was when night fell that it really came alive, as the city turned into a strip of glittering stars, strobe lights sparked off the pink-lit stage, and crowds cheered and danced beneath a sky covered in diamonds, untainted by any light pollution.

The atmosphere was electric – twangs of the guitar ricocheting off the rocks, bang of the bass vibrating in my chest – and I can safely say it was unlike any other concert I’ve experienced before. Although after Telluride’s setting, I’d come to expect nothing less from this rocking, under-the-radar state. 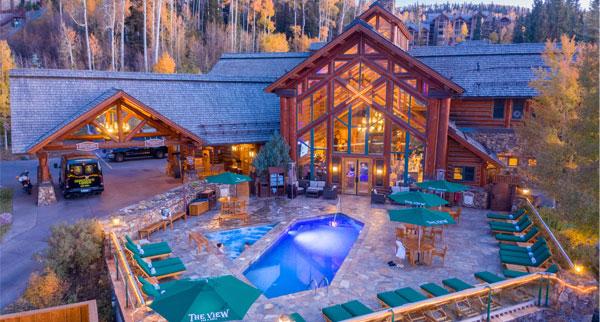 Mountain Lodge Telluride: This atmospheric, cosy spot feels like a luxury alpine chalet with wooden decor and a peaceful location away from the main town, connected by gondolas that whisk you over in about 30 minutes. Rooms, split into separate lodges, are huge (my suite had a kitchen, living area, bedroom and balcony), and there’s a pool area with mountain views. Rooms from $249 per night.
mountainlodgetelluride.com

Sheraton Denver Downtown: Located on 16th Street Mall – the promenade that leads through the heart of the city – and close to cultural hotspots such as Denver Art Museum, this makes an excellent base. There are 1,000-plus rooms spread across several sprawling buildings, with rates from $289 per night.
marriott.co.uk

The Armstrong Hotel: Renovated in 2019, this boutique spot in downtown Fort Collins feels more like a family house than a hotel, with stylish monochrome decor, a lobby that doubles as a library and a bar that hosts jazz bands. Rooms from $110 per night.
thearmstronghotel.com