Ask anyone where Saxon Switzerland is, and chances are they’ll say… Switzerland. At least, that was my response, before I ventured here to discover what felt like something of a hidden treasure.

It’s actually a sprawling national park in eastern Germany, where huge, grey sandstone formations, or karsts, jut up like something from Jurassic Park, peeping through feathery pine forests and drawing climbers who come to scale its jagged columns.

Fairytale-like castles shape the skyline, while pastel-coloured villages scatter the landscapes. It’s all charming and peaceful, cut off from the bustle of city life and providing a slice of rural Germany at its most quintessential.

Two days’ hiking and cycling through its serene landscapes had me feeling rejuvenated, and I left with a new-found sense of energy only nature can give. Here are some of the highlights to help you sell it.

Hike through the forest

More than 250 miles of hiking trails make the region a wonder for walkers. Among several multi-day routes is the Malerweg, a 70-mile ‘path of painters’, which follows in the footsteps of artists such as Canaletto, who found inspiration here in the 18th and 19th centuries.

We walked a section of the route, meandering along springy forest floors as the scent of fresh pine swirled through the air and sun-dappled trees arched overhead. It was as idyllic as it sounds – but it was when the humongous rocks started to appear that it became even more interesting.

“Among several multi-day routes is the Malerweg, a 70-mile ‘path of painters’, which follows in the footsteps of artists such as Canaletto.”

Metal handrails were on hand to guide us along sections of them, while staircases and ladders led us up and down the craggy rock faces, as we squeezed through narrow, cave-like gaps. Clambering up a series of steep inclines led us to the peak of the Gohrisch, where a tapestry of yellow-green pine forest sprawled out below, table mountains rising in the distance in faint, silhouetted squares that wouldn’t have looked out of place in the Wild West. 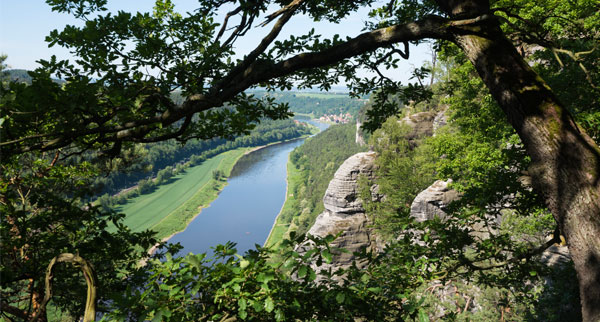 Bike along the banks

It’s not just the hiking that draws active types here, though. Among the biggest lures in the region is the Elbe Cycle Route, a 600-plus-mile bike trail that meanders along the river, starting in the Czech mountains before cutting through the heart of Saxon Switzerland and the Elbe Sandstone Mountains.

“It was beautifully peaceful, the only sounds the rustling of leaves, and the odd hum of a ferry shuttling visitors across the river in a slow, sleepy way.”

It’s a popular route for domestic tourists and locals, and it’s easy to see why. Cycling a section of it on e-bikes, from nearby spa town Bad Schandau to the Czech border, revealed postcard-pretty scenes, with tree-carpeted slopes on one side and the shimmering emerald hues of the Elbe on the other.

It was flat and nigh-on empty, meaning a relatively easy ride, and it was beautifully peaceful, the only sounds the rustling of leaves, and the odd hum of a ferry shuttling visitors across the river in a slow, sleepy way that seemed to typify the feel of this region as a whole. 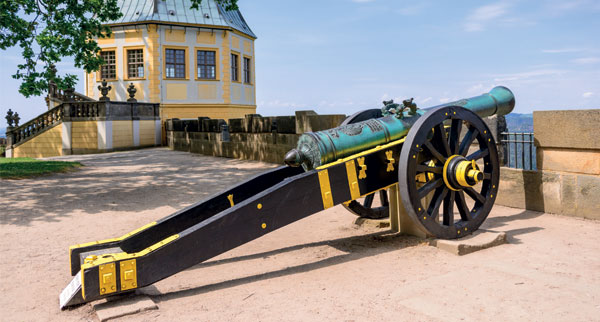 Away from adventurous activities there’s plenty more to lure visitors here, not least the Königstein Fortress, a medieval, hilltop castle dating back to at least the 13th century that draws significantly more overseas tourists than the rest of the (largely deserted) park.

“It’s well worth a visit for the views alone – think lemon-yellow fields and lush-green canopies, punctuated once again by the distinctive rock forms.”

Once used as a hunting lodge and hangout spot for Saxon royals, then as a state prison, it’s now a museum, displaying armoury and other military relics across a collection of stone houses built into the battlements. It’s well worth a visit for the views alone – think lemon-yellow fields and lush-green canopies, punctuated once again by the distinctive rock forms – and there’s a circular path you can follow all the way around to get the best panoramas. 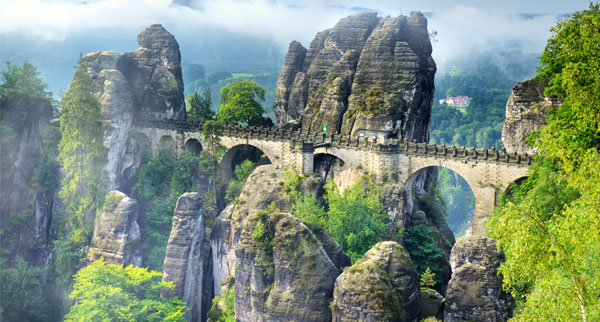 The biggest attraction in the region, though, is the Bastei Bridge, a man-made platform that takes you to admire some of the most dramatic karsts in the park. Here the grey-black shards sprout up like giant fingers, wisps of greenery bursting between them as forested mountains rise in the distance.

“It’s a seriously impressive, if imposing, landscape that feels more film set than reality – much like the rest of this extraordinary, little-known region.”

There’s a series of steps you can follow to get the best views, as well as plenty of hiking routes that take you right into the heart of it. But wherever you wander, it’s a seriously impressive, if imposing, landscape that feels more film set than reality – much like the rest of this extraordinary, little-known region which, if it’s not already on your radar for active clients, seriously should be.

The closest city to Saxon Switzerland is Dresden, around an hour’s drive away, to which Lufthansa, KLM and Swiss offer connecting flights via their hubs. Berlin is about a three-hour drive away.

Walks Worldwide has an eight-day, self-guided Trails of Old Saxony holiday including visits to Bad Schandau, Bastei, Königstein and the Malerweg. It costs from £599 excluding flights.
walksworldwide.com

On The Go Tours offers a Bohemian and Saxon Switzerland National Park Day Trip from Prague for £131.
onthegotours.com 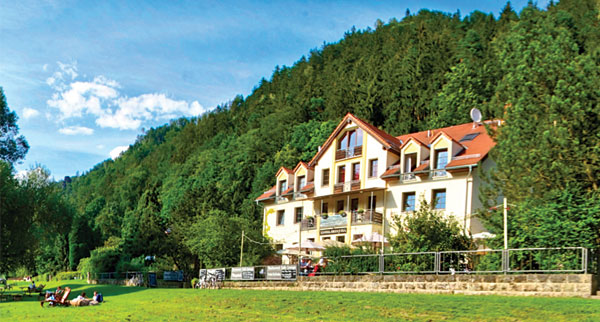 One of several hotels set on an organic eco-retreat – designed like a traditional German village, with a bakery, mill, spa and more on site – Hotel Helvetia makes a peaceful, scenic base. It’s set right on the banks of the Elbe in quiet, verdant surroundings, with rustic rooms spread across several colourful buildings.

The location is ideal, with the Elbe Cycle Route right in front and spa town
Bad Schandau nearby. Food is a highlight: it’s all organic, with a daily set menu including fresh salad, much of it from the hotel’s garden. The hotel seemed more popular with domestic than British tourists, which made it all the more authentic.

Book it: From €159 per room based on two sharing and including breakfast,
dinner and use of the spa.
biohotels.info/en