Laura French spices up a safari with a visit to Samburu village in Kenya to learn about this semi-nomadic tribe.

“I’m not made for dancing” is my overriding thought as a circle of women and children prance around me in colourful dresses and jewellery.

They sing and clap, shaking beaded neckpieces with enviable finesse, before inviting me to join in against a backdrop of parched trees and dusty soil. I get quite into it.

I’m visiting a Samburu village in north-central Kenya to learn more about this semi-nomadic tribe – closely related to the Maasai – on an excursion from Lodo Springs, a luxury safari camp that opened last June in the Loisaba Conservancy, as part of the Elewana Collection.

“This time it’s a group of boys wrapped in bright red and purple cloth, who sing and jump in a vibrant, theatrical contest.”

The village chief, aka Bob, guides us around, telling us about the Samburu way of life, which involves moving around the country in search of fresh pastures for cattle.

Then we’re treated to another performance. This time it’s a group of boys wrapped in bright red and purple cloth, who sing and jump in a vibrant, theatrical contest. 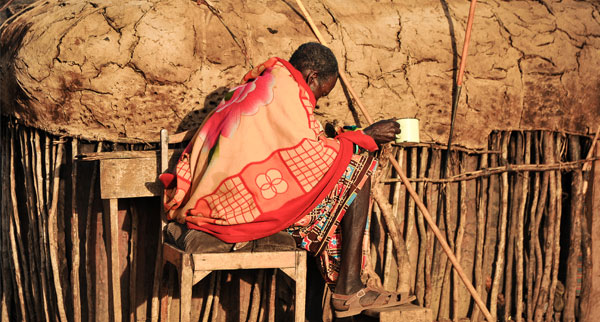 “These are the village’s warriors,” says Bob. “Once a year, we hold a circumcision ceremony, marking the transition from childhood to adulthood.”

He tells us how warriors in former times would kill lions with a spear to “prove their manhood”. “But this is in the past,” adds Bob. “Now we’ve been educated about the importance of wildlife for the community.”

Next we’re taken to see the manyattas – circular, domed huts made from mud, cow dung and leaves. Inside, next to a small stove, a pile of cow hides forms the bed – which might be shared by a family of up to 10.

“It’s an example of tourism done well, and I leave with a new-found sense of knowledge about the cultures that have shaped this extraordinary country.”

It’s fascinating, but I wonder if it’s all just for tourists. “No,” says Bob. “We guard our traditions with pride, in a way many others have lost. Some younger generations live in houses in the cities, but many still live nomadically.”

There’s an element of the touristic about it, obviously  – I’m one of about 10 visitors from nearby camps. But it still feels authentic, as villagers dance with what looks like genuine joy around the manyattas in which many live. It’s an example of tourism done well, and I leave with a new-found sense of knowledge about the cultures that have shaped this extraordinary country.

The three-hour Samburu village excursion from Loisaba Lodo Springs costs $40. Nightly rates at the camp start at $1,000 per person, including transfers, all meals and drinks, and activities such as guided walking safari, sundowners and bush breakfast.
elewanacollection.com