Summer bookings are back, as Greece flights resume this week and Cyprus is set to open borders to Brits next month. But for those who’d rather wait until the rush subsides, Laura French looks at the shoulder seasons.

As swathes of Europe open up for travel, the summer season appears to be inching its way to a return – but with holidays starting later than usual and confidence likely to take some time to come back, many resorts are looking to extend into autumn and even winter.

That’s especially true of Greece and Cyprus, where temperatures can stay cosy into October and beyond, without the searing heat of the summer months. But which regions and islands in particular should you be looking to and why? We’ve canvassed the experts for their recommendations.

Why: Quaint hilltop villages, peaceful hiking trails, laid-back tavernas and idyllic mountain markets: for visitors after a taste of the real Cyprus, the Troodos Mountains appeal at any time of year but it’s in autumn that the region really comes alive, according to Dudley der Parthog, Sunvil director for Greece.

“Many villages host food festivals in the autumn, including the two-day Apple Festival in Kyperounta, where you can try local produce,” he says. “There are also lots of hiking trails to explore, which are more pleasant in the cooler months.”

“This lovingly restored, characterful inn is within close walking distance of the hiking trails and also the medieval Church of St Nicholas of the Roof.”

Highlights include Omodos, a quintessentially Cypriot village known for its wine and lace-making; the Kykkos Monastery, an 11th-century relic tucked away in the trees; and the Caledonia Waterfalls, a glistening, crashing plume of white water set in the heart of a cypress forest.

Stay: For an atmospheric base, Sunvil recommends the Linos Inn. “This lovingly restored, characterful inn is within close walking distance of the hiking trails and also the medieval Church of St Nicholas of the Roof – a Unesco World Heritage Site – making it an excellent base,” says Der Parthog.

Book it: Seven nights at the Linos Inn costs from £628 per person, based on two sharing with breakfast, including flights and car hire.
sunvil.co.uk 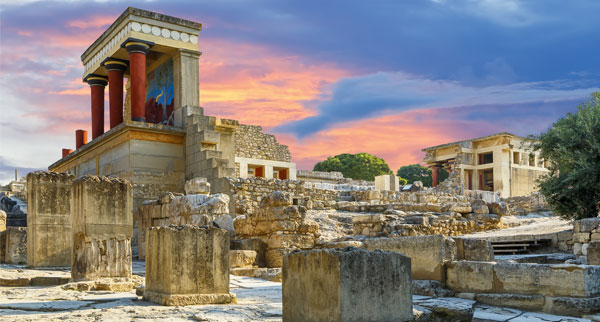 Why: As the southernmost island in Greece, Crete retains its sunny skies and decent temperatures for longer, with averages of 17C even in November. “You’re likely to get the best weather out of all of the Greek islands at this time of year,” says Nicole Williams, marketing manager at Carrier. “The sea is also still warm enough for swimming and you’ll find fewer crowds than during the summer months.”

“As the southernmost island in Greece, Crete retains its sunny skies and decent temperatures for longer, with averages of 17C even in November.”

That makes it an excellent option for families – as do the many child-friendly resorts scattered across the island and the plethora of things to do, from visiting Knossos Palace, the Bronze Age archaeological site coined ‘Europe’s oldest city’, to exploring its beaches, mountains, monasteries, caves and beyond.

Stay: Suggest the five-star Domes of Elounda for families after a swanky seaside retreat – and upsell to a Private Residence if they’re really looking to push the boat out, says Williams. “These offer à la carte dine-around options and enhanced VIP services, as well as boasting heated private pools (ideal for this time of year) and ample space for families to spread out and relax in,” she says.

Book it: A week’s half-board in October costs from £4,710 for a family of four sharing a Domes Private Residence Two Bedroom with Private Pool, including flights from Gatwick and private transfers.
carrier.co.uk 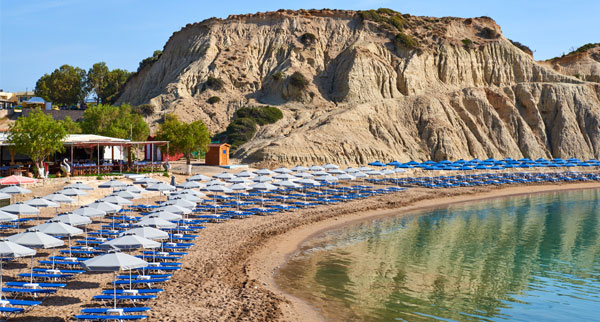 Why: With more than 3,000 hours of sunshine per year, Rhodes is a safe bet for late-season fly-and-flops, with clear blue skies stretching well into winter. “Rhodes tends to stay open for longer than other Greek islands with resorts usually still busy,” says Mark Hall, Tui director of product. “There are beautiful beaches to explore as well as traditional villages that really put you in touch with the local culture, plus ancient historical ruins, island boat trips and plenty more.”

Among its most popular spots is Lindos Beach, where bright aqua water laps a long, gold-sand curve. For a quieter alternative look to Kolymbia, a peaceful pebbled bay on the eastern coast, flanked by leafy trees and crystalline water.

“There are beautiful beaches to explore as well as traditional villages that really put you in touch with the local culture, plus ancient historical ruins, island boat trips and plenty more.”

Stay: For clients wanting to base themselves close to Kolymbia, suggest the 5T-rated Tui Blue Atlantica Imperial Resort, an adult-only retreat boasting swim-up suites, a lagoon-style pool, restaurant with live cooking station and impressive spa, plus wine tasting, watersports and other activities.

Book it: A week costs from £659, based on two sharing half-board with flights and transfers, departing Stansted on October 14.
tui.co.uk 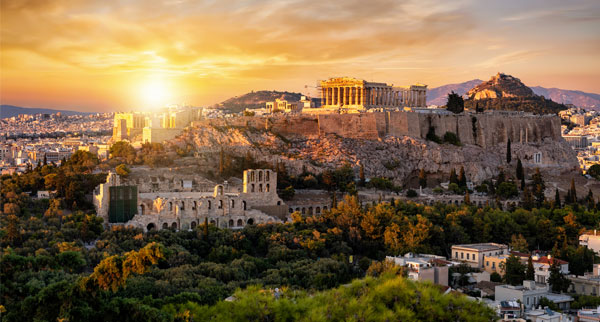 Where: Athens and Thessaloniki, Greece

Why: With its smattering of ancient Greek and Roman remnants – not least the Acropolis and its hilltop Parthenon – Athens needs little introduction, and there’s no time like the off-season to wander its cobbled alleys and age-old archaeological sites without the humidity of summer.

“There’s so much to see and do here throughout the year, plus Delphi and the Athens Riviera can both be done as day trips,” says Harry Kyrillou, commercial and aviation director at Planet Holidays.

“Recommend St George Lycabettus for clients after a suave, five-star stay in Athens, with shops, galleries and museums right on the doorstep.”

He suggests pairing the city with a trip to Thessaloniki to extend the cultural musings and to explore the Unesco-listed churches, Byzantine architecture and postcard-pretty waterfront area of this charming, old-meets-new city – then adding a tailor-made day trip to the Second World War memorials or the Kilkis battlefields, if time allows.

Stay: Recommend St George Lycabettus for clients after a suave, five-star stay in Athens, with shops, galleries and museums right on the doorstep – plus individually themed rooms, a rooftop pool and breakfast room overlooking the Acropolis.

Book it: Planet Holidays offers seven nights at St George Lycabettus with breakfast from £705, including flights from Gatwick on December 4 and transfers. A seven-night twin-centre trip combining Athens with Thessaloniki is also available from £1,137, including domestic and international flights and transfers, departing February 18, 2021.
planet-holidays.co.uk

Escape to the country with an agritourism stay during the harvest season – olive-picking starts in October on islands including Crete, Kefalonia and Kalymnos 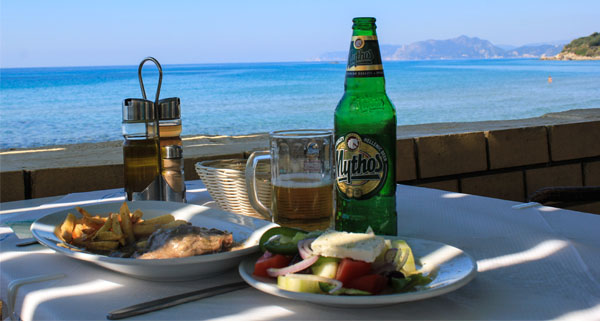 Why: With its distinctive formula of lush, rugged mountains, colourful Venetian architecture and opal-fringed coastline, Corfu is something of a magnet for walkers, and with averages of 18C in October and 14C in November, the off-season is an ideal time to explore its tracks.

“Corfu is something of a magnet for walkers, and with averages of 18C in October and 14C in November, the off-season is an ideal time to explore its tracks.”

Stay: Clients wanting to base themselves in one place and throw in the odd day’s walking will find a handful of routes to explore. But for those keen to really embrace the hiking side, Inntravel has a seven-night, self-guided trip along the west coast, combining a section of the iconic Corfu Trail – an epic, 136-mile route through the heart of the island – with other scenic ambles through ancient villages, rural settlements, Byzantine monuments and ancient monasteries aplenty. 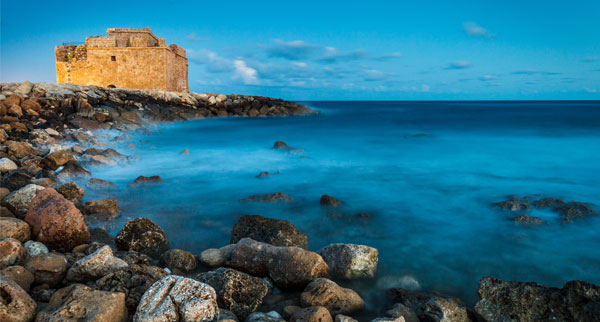 Why: Cobbled streets lined with quaint tavernas, a bustling harbour flanked by fishing boats and calm, Blue Flag beaches come together in Cyprus’s best-known southerly city, and the shoulder seasons are the perfect time to enjoy them without too many others around.

“Paphos has daily temperatures of up to 20C even in December, and the evenings are still very pleasant,” says Chris Yianni, head of product and purchasing at Mercury Holidays.

“Outside the city there’s plenty more to explore, including Geroskipou, a town famous for its Cypriot sweets, and Aphrodite’s Rock, supposed birthplace of the goddess of love.”

Historic lures include the Kato Paphos Archaeological Park – home to temple ruins, mosaics and an amphitheatre – and Paphos Castle, a Byzantine fortress by the sea. Outside the city there’s plenty more to explore, including Geroskipou, a town famous for its Cypriot sweets, and Aphrodite’s Rock, supposed birthplace of the goddess of love.

Stay: Recommend the five-star, adult-only Leonardo Plaza Cypria Maris Beach Hotel on the edge of Kato Paphos for a beachside stay with several restaurants, indoor and outdoor pools (heated in winter), a spa, tennis and squash courts, plus watersports at the beach and nightly live music.

Book it: A week’s half-board in a Twin Inland Room at Leonardo Plaza Cypria Maris costs from £289, including flights from Stansted on January 31, 2021.
mercuryholidays.co.uk

Syros, Greece: Pastel-hued villas, a picturesque harbour and steep, hilly slopes characterise the Cyclades’ capital, and it stays lively year-round thanks to its student population, with tavernas, live music and other festivities keeping locals as well as visitors entertained through to winter.

Pissouri Bay, Cyprus: Watersports are the order of the day in Pissouri Bay, with windsurfing, kitesurfing, sailing and waterskiing all popular well into the autumn months, and diving available year-round.

Epirus, mainland Greece: This mountainous corner of Greece stays warm long after summer ends, making autumn one of the best times to explore its hiking trails and beaches, according to Sunvil’s Dudley der Parthog. “It’s particularly beautiful at this time of year,” he says. “The coastal resorts of Parga and Sivota are also quieter, allowing for more one-to-one interaction with local residents and providing an authentic view of the region.”