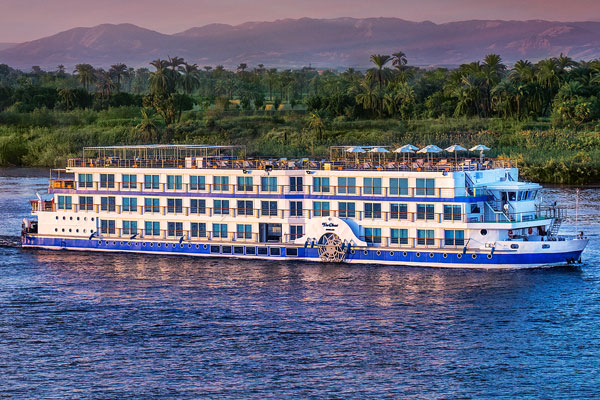 Cruise like a queen through the Valley of the Kings, writes Clare Walsh.

A golden light gently rouses me from sleep as our cruiser sets sail, ready to begin its day’s lazy meander down the mysterious Nile.

As I pull back the floor-to-ceiling windows, a fiery red ball makes its drowsy appearance behind the hills, rising above the land where ancient feet have trod and great pharaohs lie buried; two fishermen in white robes glide silently past, their oars skimming the river.

Watching this scene, it’s easy to understand why the Nile was considered sacred in ancient times. It feels almost biblical. This magical quality is apparent right from the first morning and continues throughout our trip, organised by Mediterranean specialist Cyplon Holidays. 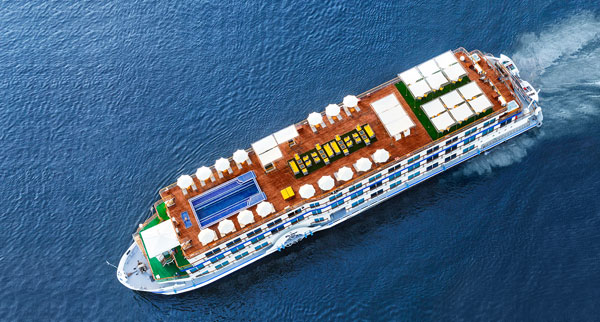 Our four-day cruise on the five‑star Oberoi Philae between Luxor and Aswan was to take us to some of the most famous sites of this historic waterway.

Set against a backdrop of lyrical storytelling by our talented guide and learned Egyptologist Tarik, we were transfixed with stories of gods and deities, the afterlife and religion – topics that dominated the lives of the ancient Egyptians.

Authentic, enriching experiences, coupled with luxurious surroundings on board, is what makes this trip special.

Clients can expect to be immersed in the life and times of a fascinating, awe-inspiring civilisation through a series of visits to key sites.

The vast Karnak Temple, for example, which means ‘the gigantic one’ in Arabic, extends three‑quarters of a mile and is one of the largest religious sites in the world. Visitors can explore the remains of temples, market places, obelisks and baths.

New discoveries and excavations happen continuously, and our behind-the-scenes tour revealed a temple that will open to the public in 2017. Walls once blackened are undergoing meticulous cleaning to reveal vibrant multi-hued frescoes. 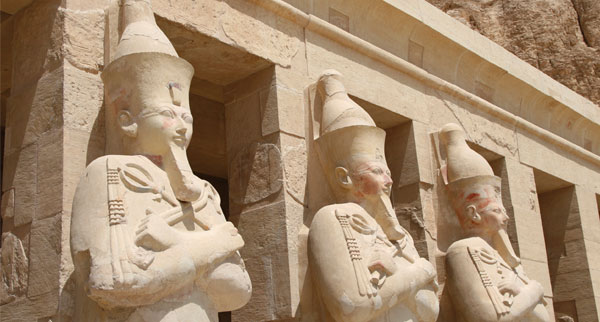 The size of these majestic structures is astounding, while learning about the advanced inventions and tools created by the ancient Egyptians is both fascinating and humbling.

The Temple of Horus, for example, situated in Edfu and reached from the boat by horse-drawn carriage, houses a nilometer, an instrument used for measuring the clarity and water level of the Nile in flood season.

Our moonlit visit to atmospheric Kom Ombo Temple – made all the more ethereal by the echo of the haunting call to prayer – revealed inscriptions on the walls of medical instruments and treatments. Crowns for teeth, pregnancy tests, scalpels, bone saws and suction caps are all detailed.

A highlight of the cruise takes visitors to the eerie Valley of the Kings, where the pharaohs of the New Kingdom period (1550BC to 1069BC) were buried. It is from here that the phrase ‘light as a feather’ originated – when a pharaoh’s heart was removed and weighed against a feather to determine whether he would be granted eternal life. The 63 known tombs are open on a rotation basis to ensure preservation, with the entry ticket allowing access to three tombs. An extra ticket can be purchased to see the tombs of Ay, Tutankhamun and Ramses VI.

Back on board the Oberoi Philae, clients can spend the rest of the day unwinding and making the most of the onboard facilities. The most difficult decision is deciding whether to bask in the sun, take a dip in the pool or enjoy a luxurious treatment in the spa.

This ship is perfect for clients who want the dual benefit of culture and luxury, and also appeals to a wide range of age groups. 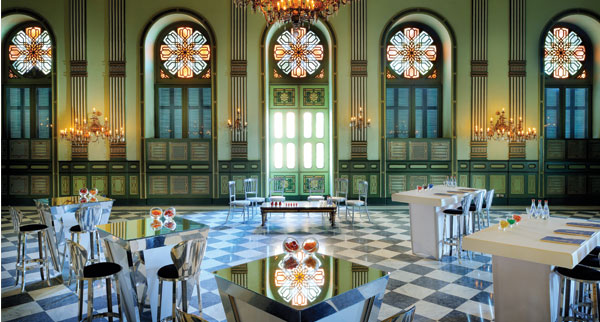 The final leg of our trip took us to Cairo, by way of an EgyptAir flight lasting just over an hour.

Pulsating with energy and an infectious buzz, the city is a perfect contrast to a peaceful Nile trip.

We stayed in the showstopping Marriott Cairo. Like many other high‑rise hotels in the downtown area such as the Fairmont, Conrad and Hilton, it is geared towards business clients and offers lots of meeting space and conference rooms.

It still has strong appeal for holidaymakers, though. Situated in six acres of land on an island on the Nile, it houses an original palace built in 1869. The opulent interior is a nod to its regal past, featuring luxurious furnishings and theatrical rooms for dining, entertaining and relaxation.

The Marriott Cairo offers 1,000 rooms and suites, 15 restaurants, shops and fitness centre, and also has a swimming pool and tennis courts.

From here, it’s easy to visit the iconic Pyramids and Sphinx, built an incredible 1,000 years prior to the temples we had seen during the cruise. As awe-inspiring as imagined, it is in this area that clients will find more of the leisure-oriented hotels geared towards tourists. They include the Movenpick. 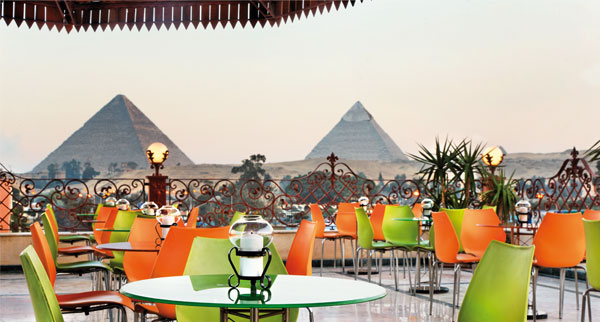 These ancient wonders aside, there’s no denying the crippling effect that political instability and anxiety over terrorism has had on tourism. The sites we visited have experienced a severe drop in visitor numbers, with our guide Tarik estimating the downturn to be as high as 90%.

Street sellers determined to get a sale flocked to us at every tourist site, desperate for the few holidaymakers that do visit to part with their cash.

However, it is worth pointing out that the Foreign & Commonwealth Office advises against travel only to the Sinai region, and specifically states this does not include the tourist areas along the Nile River.

Any officials we met en route were keen to emphasise the additional safety measures in place – from our visit to a control room in Luxor that has cameras monitored 24 hours a day, to the security bag scanners and sniffer dogs at hotels in Cairo. Two guards also travel on every EgyptAir flight.

In fact, it is the lack of crowds at some of the greatest wonders of the world and the fact that the Nile is no longer clogged with cruise boats that makes now the best time for an aspiring visitor to take a trip.

With a new-found taste for cruising and an even greater respect for the wonders of ancient Egypt, I came away with a feeling that this is not somewhere to be avoided, especially when it needs tourism more than ever.

We can’t desert Egypt – it has far too much to offer.

Cyplon offers a seven-night Nile cruise and Cairo trip starting at £2,489. The price includes four nights’ full-board in a Luxury cabin on the five-star Oberoi Philae, two nights’ B&B in the five-star Conrad Cairo and a night at the five-star Maritim Jolie Ville Luxor staying B&B in a standard room, plus EgyptAir flights from Heathrow, private transfers and an English-speaking Egyptologist accompanying all excursions. cyplon.co.uk 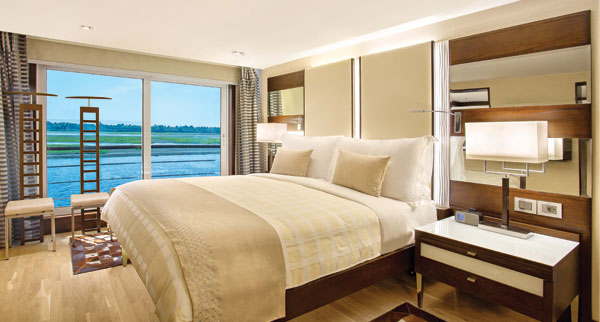 After an extensive refurbishment four years ago, the luxury Oberoi Philae cruise ship offers four and six-night cruises along the Nile between Luxor and Aswan.

Featuring 22 suites and cabins, the rooms are light and airy with contemporary decor, each offering a sitting area, large bathroom and French windows providing spectacular views along the Nile. A large luxury suite is available which features a private terrace and whirlpool.

The main restaurant serves excellent international cuisine, while drinks can be enjoyed in the bar and cigar lounge.

Al fresco dining is available on deck in the poolside restaurant and cocktail bar where light meals, snacks and barbecue lunches are available.